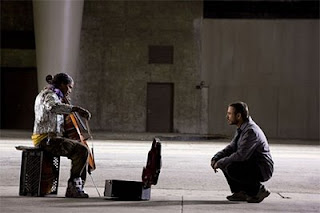 I haven't blogged about a movie in a while. Guess I haven't see any new worthwhile ones lately. Not since Oscar season anyways. I know I blogged about Doubt and Young at Heart, which I know are both on DVD now (and if haven't seen, should go see!).

Last night, the roomies and I saw The Soloist with Robert Downey Jr. and Jamie Foxx. It is about a writer for the LA Times, Steve Lopez (Downey Jr) who finds Foxx's character, Nathanial Ayers Jr., playing the violin (I know the picture shows him playing the cello, that comes later. I do know my stringed instruments :)- homeless- in a park close to the newspaper office. Lopez is struck by Ayers' talent, and does some research on him for a story. I don't want to spoil anything, so I'll just say Lopez becomes very involved in Ayers' life and the rest of the movie is about that.

Living in DC, we encounter the homeless alot too, but I've never seen anything like the representation of LA's Skid Row. It is overwhelming and tragic to see that this level of homelessness exists in this country. So I really appreciated the movie's representation of reality, it seemed. It was not exploitive- which some "issue" movies can turn a serious issue into something light and cozy and fluffy. I think the way they presented homelessness was very real, but I've never been to LA.

That was only one of the reasons I really liked the movie. There are so many more! Not only was it not gratuitous in any way with violence or sex (proving you CAN have a good movie without it!) but the music that Ayers' plays and is in love with -Beethoven, Bach, Mozart in particular- is a character in the film as well. They really let music play a role and will have entire scenes of just a piece playing Ayers' head. I appreciated that they let the Classics play and didn't cheat them or cut them short. They really allowed the music to have life in the film which I think made Ayers' character and story all more powerful.

And it is just incredibly acted. I knew Robert Downey Jr and Jamie Foxx were good actors- they've played intense roles before. But they are SO good and just natural in this. They really make you think they ARE Lopez and Ayers.

It is all based on a true story, which makes the story, to me even more amazing. Definitely check it out- if not in the theater on DVD. But I would recommend the theater since music does play such a big role, you can feel like you are right there with them at a concert :)

Hope this movie inspires you as it did me. I have had some limited experience with poverty and homelessness, so it is subject matter that I feel passionate about. And I can say, when you are dealing with poverty and homelessness, you ask yourself- like Lopez's character- what can I do? How involved should I be? We always want to do more. I know when I was in Guatemala that was the case, but after spending a couple months there I saw, there is only so much we can do. I think Lopez encounters these questions and I could relate to them.

Plus studying Classical music for almost 20 years, I could really appreciate the music's role in this. It made me want to work on a concerto again! I hope you enjoy it too!