Fall is one of my favorite times of year, however, it is also one of the most hectic. And this fall has been no exception. I have picked up an extra duty at school this year which seems to be a seemingly appropriate fit- helping with liturgies at school- but it has been more stress so far than I would have liked. The beginning of the school year is always time spent emphasizing routines while juggling all of the non-routine things like special back to school events and activities. And now we are in October!

Even though it took the terrifying and destructive path of Hurricane Michael to do it, fall weather has started to set in. We have had so much rain and humidity this summer. It has been one of the wettest years that I have experienced in VA in a long time. Floods have become common place in our news and in our country this past year. It seems like my students and I are always praying for those affected by the extreme weather and we ourselves have been affected by it with Hurricane Florence and Michael of late.

The news continues to bring anxiety and gloom to us and this time last year, I was not in a good place. Perhaps the extra little stress at work has been a good thing for me as it has kept me from getting too overwhelmed with everything else: midterm elections, sex abuse scandals in the Church and in also in our Courts, Climate Change predictions that number our days just to name a few.

It has taken community that I have spoken much of this year and time to relax and pray for me to keep it all together. And reminders like yesterday's canonizations to give it all balance and perspective. 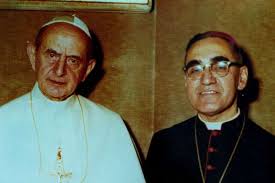 Saints Pope Paul VI and Oscar Romero have been two of my favorites since I learned about them in high school and college. I was first introduced to Romero as my diocese of Cleveland had nuns that were sent to El Salvador and were also martyred there. We learned about Romero and his story in my high school religion classes. There was also a movie about him that came out in the 90s that I remember watching. I will never forget learning and seeing the scene in the film where he is shot while saying Mass. Not only was he a heroic martyr, but he put the people of El Salvador and their justice above himself and ultimately his own life.

Pope Paul VI I came to know a little later. I was a JP2 girl as John Paul II was the pope when I was born in the 80s and also from the country of Poland where my relatives are from. I didn't know too much about Paul VI. He was Italian as many of the popes had been. It really wasn't until I obtained my Masters degree and learned about many of the documents that came out of Vatican II that I began to appreciate his wisdom. Paul VI was very concerned about evangelizing to the modern world and as a Media Studies girl, I like to think that he truly thought along the same lines as his namesake, St. Paul and wanted to use all forms of media available to get the good news of the Gospel out to people. His documents and writings from the Vatican II era really were prolific and insightful. They were of their time but also leading us into the future.

In a time of crisis for the Church with more terrible sex abuse accounts being brought out against the Church, it is easy to feel hopeless and cynical. It takes a day like yesterday, with examples like these achieving sainthood to remind me that there are holy and good people that exist and that our faith does stand for goodness and justice when it is lived properly.
Posted by Julia at 9:37 PM No comments: