Ode to My Grandmothers

Well, the 2 weeks that we were to "work from home" came and went. The governor of VA rocked my little world last week by saying that schools in Virginia would not return at all this year. Then came the announcement from him again yesterday that only essential travel and gatherings of 10 people or less will remain in place until JUNE 10th. June 10th?!

I am an identified introvert. I am an INFJ on the Myers Briggs. Many people- including myself- said I was made for this moment. And I will admit, when it was originally just a "work from home" for two weeks, I was all in. I was super excited about my online lesson plans. I was tweeting about all of the new resources that teachers could try and the cool things our students were doing. I was setting up virtual game nights for my friends.

But after those previously mentioned announcements were made, even my introvert heart started to sink. I live alone and I love it. And even though school would maybe not be my sole choice for extroversion, it at least allowed me guaranteed interaction each day. On the weekends, my friends and I would attend the latest gallery or restaurant openings. And if none of my friends were available for something, I would go to a museum or concert or coffee shop by myself just to get out.

Now I know I can't complain. We are in this situation because people are suffering. I am glad that we are making sacrifices as a country so that we can stop the spread of this virus to the most vulnerable. And as I mentioned in my last post, it comes at the almost too perfect time of Lent when we are to be sacrificing anyways.

I feel like a lot of comparisons are being made to other times in history right now. Our current president has referred to himself as a "War Time" president. And maybe this is as close to that as we have gotten in this recent generation. But if I am to think about my grandparents' generation, the sacrifices and situations certainly don't even compare. But they do give me solace and strength at this time. 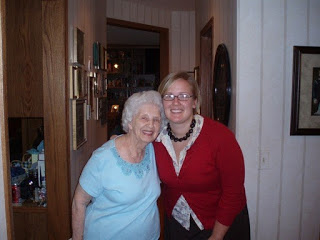 My Grandma Strukely was one of 5 kids and lived through the Great Depression and World War II in America. Her husband (my grandfather whom I never met) passed away when they had three young children (my dad was only six). She had to work as a single mother and raise three children on her own. She didn't drive and used to take the bus and walk everywhere. She never remarried. I remember thinking about when she passed how much she had to endure and how strong she was, though she never ever complained to me about her life.

My Babci was quite the opposite however... 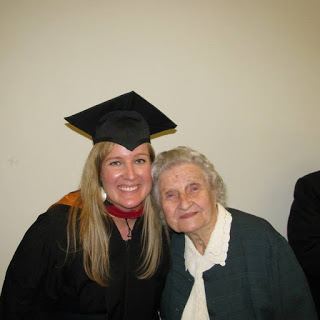 My Babci always made her story and struggle known to us. And she truly did have to endure a lot. She was born in a small farming village in Poland. She was in her early 20s when World War II broke out. She had to live WWII with the reality of what the Germans were doing all around her. Her husband (my Dzia Dzia aka grandpa) was taken to work in the Concentration Camps. He made it out of them, but that horrific experience lived with them forever. She had to immigrate with my young uncle by herself to the States while my grandfather went before them to work and find a place. She cleaned houses to make money. She worked in a factory. She would always tell you that her life was tough. But she still brought joy to everyone around her and made them feel loved.

These women and their experiences certainly shaped my parents and myself. I believe I have the best of both of their strength inside of me. My Grandma Strukely was more introverted like myself and didn't necessarily always have to have people around her. But she did always have her make up on and herself put together. My Babci was much more extroverted and could care less about her outerwear, and people were drawn to her despite and maybe because of her straightforwardness and sass.

During this time, I think about what they would do. Since both of them were widowed for most of (or all) of my life, they were on their own like me. My Grandma Strukely was somewhat of a homebody, but would take a lot of walks since she didn't drive. She was always reading or on the phone or doing a crossword. The TV was usually on in the background with the news or Wheel of Fortune. My Babci ran around the house and to every store and Church and everywhere she could until her body wouldn't let her anymore. Again, I feel like both of them right now. I know now how my Babci might've felt when she couldn't go on all her outings anymore. I know the extrovert in her would be upset over this time, too. But she would do word searches, or paint, or knit, or talk on the phone as well if she had to. They would reach out and call people when they need to.

It's time for me to channel the strength and experiences of my grandmothers now. I need their strength to help me through this uncertain time. They endured way more uncertainty than this and did it on their own as well. I need to channel the way they busied and entertained themselves when they couldn't move around as they wanted to anymore.

What about you and your families? Who are your role models that you are channeling right now? These are certainly unprecedented times for us in many ways. But there are also many who came before us that can give us a guiding light.

One of the Most Lent-like Lents There Ever Was?!

Wow. So this 3rd week of Lent has been a journey, huh? We have always known Lent to be a desert-like experience, but I haven't seen one like this in my lifetime for sure.

At the end of last week- the 2nd week of Lent- it was announced that schools in my area would be shut down for 2 weeks due to the Coronavirus. Many schools and towns around the country have been shut down indefinitely or even for the rest of the school year to contain this virus. Many of us have never seen such a thing. We all have lots of questions. We try to find the answers through politics or studies or social media, but we are coming up short. Could this be the most Lent-like thing that could happen?

Now I am in no way equating our struggles as a society right now with war or slavery or the Great Depression or the Plague- true desert like moments and hardships from the past. But for many of us, this kind of isolation and discipline is unknown. And the degrees of hardship vary for many. Some of us can sit inside our houses right now and work from home. Some don't have that luxury because they don't have warm homes. Some can't work because restaurants or theaters or their industry has been put on hold.

There are lots of negative things to this pandemic. I know, personally, I am very sad right now about the canceling of Masses around the world. I understand that to contain this virus, we need to stop congregating. But when one of the main purposes and definitions of Church IS to congregate...what do we do? We are taught that Grace comes from Christ in the community and from the Sacraments. What do we do when those things are denied us?

Welcome to Lent 2020. I have been texting priest friends and asking them if there is any way that I can get to a confession or Mass, but not all people have that luxury. It may be that instead of celebrating being halfway through Lent this Laetare Sunday with the liturgical rose all around us, we sit at home and think and pray by ourselves.

For families, this can be a unique opportunity to re-examine prayer together. As someone who sits alone and prays individually quite often, not having that community aspect is going to be hard for me.

But this is what Lent is- a desert experience. When Jesus was in the desert for 40 days and 40 nights, he was alone. He was tempted to think negatively about his mission. But he overcame and defeated the devil. This is a time to unite ourselves with Christ in our suffering and discipline, which is what Lent should be.

When the Israelites wandered through the desert for 40 years (number 40 = time of trial in Scripture), they were together, but there was an unknown. They had to trust that God was going to lead them out of that desert. They struggled, they fought, they discussed things that weren't true. In many ways, the conversations on the internet and social media seem like the Israelites trying to make their way through the unknown desert.

Easier said than done. Unknowns are always hard, especially in this world today where we can "know" something within seconds on our phones. But we are entering into an unknown, just like Christ, just like the Israelites, and trust in God is the answer.

I hope you all are well and hang in there. Easter and Resurrection may look different this year, but it is still coming.

Peace,
Julia
Posted by Julia at 7:57 AM No comments: