Happy Easter! It is the second week of Easter and I am finally getting to process all that this Easter season is and hopefully will be.

As I have mentioned quite frequently in this blog, I was a sponsor for a young woman who became Catholic at the Easter Vigil. It was a beautiful (3 hour +!) service, and it was such an honor to witness so many faithful people enter the Church! One of the reasons the service took so long was because we had probably 10 or so people receive Baptism and 20 or so receive Confirmation and First Communion! Alleluia indeed! 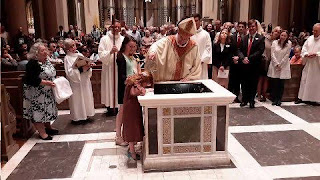 Here is a pic of the Bishop baptizing one of the catechumens.. 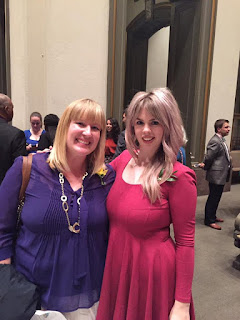 And here's me with my newly Catholic friend!

Even though the ceremony is long, the Easter Vigil is full of symbols and perfectly concludes the Triduum and begins the Easter season!

I spent my Easter Octave with a good friend who recently moved to California. I flew to Vegas to meet her (we had a tradition of going to Atlantic City when we both lived on the East Coast, so we thought Vegas would be appropriate for our reunion), spent a couple nights there, and then we drove back to California to see her new place. 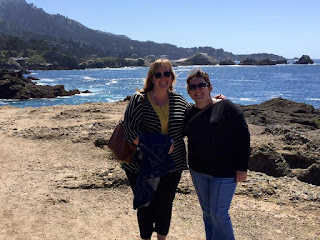 California is one of my favorite places to visit! It's always so beautiful there. Friends reunited!

It was a restful and joyful Easter Octave indeed.

Now it is the second week of Easter and the Sunday after Easter is known as Divine Mercy Sunday. Because of my travels and because of the part-time job I have taken on the weekends, I wasn't sure if I was going to make it to Mass. I was determined, however, because Divine Mercy Sunday is one of my favorite feasts named by one of my favorite saints, Saint Pope John Paul II. 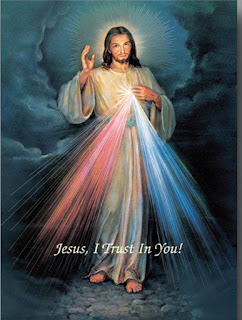 Our Lord gave St. Faustina- another Polish saint- this image called the image of Divine Mercy. Saint Pope John Paul II made the first Sunday after Easter Divine Mercy Sunday to honor this appearance of our Lord.

Because I was working and traveling but determined to get to Mass, I ended up going to a Spanish Mass on Sunday evening. I am nowhere near fluent in Spanish, but I do have an understanding of it as I studied it into college and spent two summers in Guatemala. While in Guatemala, I attended daily Mass and learned all of the Spanish responses. It also helped that I knew the theme for Sunday's Mass as well as the readings (the Spanish word for "mercy" is also very similar to the Latin; "misericordia". That word got used a lot ;)

What I could make out from the homily was that the priest introduced the concept of Divine Mercy Sunday and that this year was extra special because we are in the Year of Mercy. He also reviewed all of the readings for the day with us (Christ appearing to the apostles in the Upper Room saying "Peace be with you" and Doubting Thomas as the Gospel) and asked us where we needed mercy in our lives and who we needed to be merciful to ( I was pretty proud of my understanding of the homily, actually! I also think it was good to be taken out of my comfort zone and worship with a different community).

Even though my trip to Vegas and California was a much needed break and a week well spent, I hadn't been reading some of my favorite Scripture readings that occur that week of Easter (ie- the apostles gathering together in the early Church after these events of Christ's death and resurrection). Yesterday, I got word that yet another friend who was my peer who had been battling cancer passed away. She and I were not as close as my friend Dan who passed two years ago, but it still hit me pretty hard as she was young, full of life, and a very sweet, fun friend. I naturally turned to prayer and to the word of God in the readings of the day. I was reminded of the strength of that early apostolic community which was something that I needed and reminded me of how my friends came together when Dan had died.

I also was struck by one of the lines from the Gospel:

" just as Moses lifted up the serpent in the desert,
so must the Son of Man be lifted up,
so that everyone who believes in him may have eternal life.”

This reminder of Christ's Resurrection as an opportunity for our own resurrection was of course a message of hope to me in this time of sadness for my friend.

I also turned on a show that I had been wanting to watch and finally had time to last night- a National Geographic series on God. The first episode dealt with this same theme of our human inclination to believe in an afterlife. The episode looked at the history of this belief- starting with the Egyptians who built the pyramids and wrote prayers and had rituals so that their dead could pass into the next life- and also mentioning Hindu belief of reincarnation as well as the Christian belief of salvation through Christ. I was struck how this desire to believe in an afterlife has gone so far back in human civilization. They also interviewed people who had "near-death experiences" who all commonly describe a "light" which feels peaceful and calm. We as Christians, of course, identify this as heaven, but I think it so interesting that regardless of culture or belief, we want there to be something more and a lot of our beliefs point to common themes.

And so I have hope and faith that my friends are in a better place and are at peace with our Lord and that He met them on that journey home. In this Easter season, I am grateful for the Resurrection and the peace, hope, and joy that it brings. I am also grateful for this Divine Mercy and a whole year to celebrate it.