Back to Ordinary (Time)

Well, the Advent and Christmas seasons came and went! I hope that you all had much grace and many blessings during both! Those seasons are so important but always go so quickly. I didn't necessarily stick to my Advent promises as I had wanted, but I believe I prepared for the season well and enjoyed celebrating the Christmas season with many friends and family these past couple of weeks.

During Ordinary Time, the Church focuses on all of the miracles and the ministry of Jesus. The things that he did during the times that weren't the Incarnation that we celebrate at Christmas or the Death and Resurrection we celebrate at Easter. In Christ's "Ordinary Time" he healed the sick, preached, called his apostles, taught lessons, performed miracles. He made the most of His "Ordinary Time"!

We end the Christmas Season with the Baptism of Jesus. While it is kind of startling that we had just celebrated Epiphany the week before and Jesus was still a baby being brought gifts by the magi, now He is suddenly 30 years old and being baptized by John in the Jordan. As the Church does all things, there is a reason. First of all, we don't get many infancy narratives in any of the Gospels. That is to say, we don't really know much about Jesus' childhood other than a few stories in Matthew and Luke. Both Mark and John start with Jesus as an adult, being baptized by John in the Jordan because this was the start of his ministry. So too, then, our Christian ministry begins with our baptisms. The rest of our lives are to be spent trying to serve as Christ served as best as we can.

I typically try and make some new year's resolutions that I think are realistic, but they inevitably fall by the wayside (I don't think that I am alone in this). In the past, I've tried to have years of more positive thinking or eating more green things. Last year, I actually followed through with my goal of cooking more. This year, I want to read more and use less social media and tv. I've started by getting rid of cable and my phone told me that my screen time was down so far this week!

That being said...slowing down on social media is going to be difficult. This post today was actually inspired by a "challenge" that was floating around on Facebook and Instagram. People have been posting pics from 2009 and 2019 side by side to show how they've changed or grown. 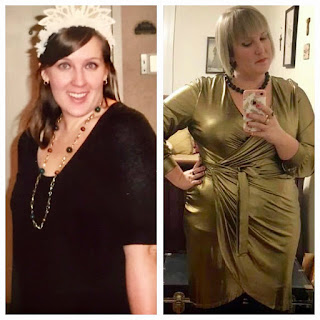 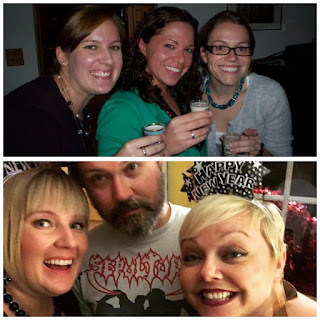 Posting pictures like this of course leads to some reflection. The darker haired, younger looking 28 year old had just left the convent the year before. She was starting over but lucky to be surrounded by familiar faces and the community of college friends. She had given up her job, car, and many of her possessions before entering the convent. Acquiring those things in 2009 was relatively easy, but the job she picked up was a learning experience. She hadn't yet found her calling of being a teacher. She did, however, recognize her desire to continue her education and started grad school for Theology in 2009. She started exploring the world of dating again and would have many bad first dates and failed "relationships" in the next 10 years, but always persevering and trying to better herself.

The woman in 2019 has embraced the "edge" that has always been there. She used to try and fight and condemn that edge, but now she accepts it. She continues to battle the negativity that comes to taunt her, but has become much calmer in many ways, less uptight. She has established a career that she didn't realize ten years prior would very much define her and utilize her strengths and natural gifts. In 2019, she no longer lives with roommates, but still surrounds herself with strong community that build her up.

To switch back to first person here, in 2009 I was just trying to figure things out again. I thought my life was going to be one thing, but it actually has turned out to be something much greater for me. I have a few clear things that I've achieved: a Masters degree, a career as a teacher, I've traveled around the world, developed skills, and discovered art. But much of my life continues to be in flux, which I don't thing 2009 Julia knew was going to still be the case and that it would be okay. In our 20s, so many of us want a clear path or to be defined by achievements and relationships...I have that in my 30s, but maybe not quite in the way that I thought back then.

The main thing that I have learned in these 10 years is that God truly is in the "ordinary" and life doesn't have to be defined by revolutionary, life-changing moments. Here's to embracing more of the fantastic ordinary and welcoming any extra-ordinary in 2019.

Peace,
Julia
Posted by Julia at 8:27 AM No comments: