Do do you got a first aid kit handy? Ahhh....Lyrics from my current fav pop song (the ladies pictured below will tell you!) "Damaged" by P. Diddy's own Danity Kane. It's catchy, and I love to request this song to djs (again, the ladies below will tell you) and see their reactions because it's such the teeny bopper pop song, but I love it!

It seems lately my favorite songs are about the blood and guts of love. The title to this blog post is the title to Leona Lewis' summer hit (which I also loved until they out played it on the radio):
"my heart is crippled by the vein that you keep on closing...you cut me open". Pretty gruesome!

And there are- as there are with many pop songs- Christian analogies that could be made, and they are pretty obvious, so I won't patronize you by pointing them out. I will just say that I was contemplating in prayer this morning the vulnerability of Christ's love on the cross and I see how we as a culture long for this and relate to this, even if we don't recognize Christ as the source. We just long for the blood and guts of love, as is evident with such lyrics and songs.

We all fear being vulnerable and 'cut open'. We fear 'bleeding love'. Yet we all have gone through it and experienced it. I will argue that the reason that 'chick flicks' are so popular is because we can relate to the vulnerability of the main character, and we desire the climax where he/she finally reveals his/her pining love. Exposing their hearts, their love, for all to see. We secretly wish we were that brave. Or maybe we have been, and we know their pain.

As I was praying this morning, looking at the crucifix and seeing Jesus in the vulnerable position of hanging on the cross, not holding back love, but revealing it- and literally 'bleeding love'- I was struck by how we all long to be brave enough to do that. And we long to have that done for us.

Love is messy. Love is risky. Love is all out there in the open. It's scary. It can be gruesome.
But that's why we love it when we receive it, and why we long to see it for ourselves. We can't turn away from the trainwreck that is love!

I hope this is making sense. It all did in my head this morning.

I guess I'm just seeing the risk it takes for love and the scariness of it, but then there is always a happy ending- whether that be reciprocating love or not- there always is the Resurrection. Which makes the bleeding love worth it.

Today's Gospel was about a king inviting people to a banquet, a party. And they turned down his invitation. How many of us would turn down a free party? Even if we didn't like the person hosting, we probably would go for the free booze and eats. It's hard to put ourselves out there like Christ does- out on the cross, free invitations. We reject it, just like we might be rejected if we put ourselves out there, but as in any chick flick, there is always some resolution. Always some growth in character. And so we 'keep bleeding. keep keep bleeding love'.
Posted by Julia at 10:01 AM No comments: 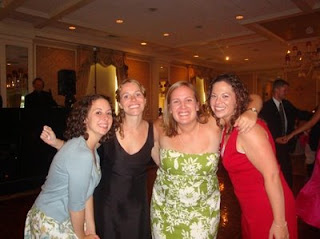 My best girls who help get me through! Meg, Steph, me, and Susan at James' wedding Aug. 16

I know that I have been 'back' for a while, that is, I left the convent three months ago. But I don't think I spiritually or mentally was 'back'. This week, though, I finally feel like "I'm back". Back in the world, but back also with Jesus- back on the right track.

I've been told it takes at least half the time that you are in a relationship to recover from a breakup. It's been about a third of the time that I was in the convent, but I had been discerning for well over a year. And while, this is deifinitely not a 'break up', I felt a little confused the past couple months as why all the events of the past year or so had to happen like they did.

I wouldn't say I've been in spiritual desolation or anything, but I have felt a little removed from God, and maybe I even did that intentionally. You know that after a break up, sometimes you just don't want to see that person for a while. But this was between me and GOD...you can't really avoid Him. Well, you can, and I think I did, but I was finding that it hurt me more to do so.

So Jesus and I are talking again ;) We always were, but I've been making time each morning for prayer and going to Mass and the Sacraments regularly. I feel like He's finally giving me some insight again into His Plan. For the past few months I've been wondering 'why' alot, and now He's finally starting to show me...."oh, that's why!" That's why I'm back in DC. That's why I'm at the Pallotti Center, etc. And as far as God's time goes, three months is actually kind of quick to get some answers, so I'm grateful! He knows me and how impatient I am ;)

There have also been some things going on with my friends so it's made me want to step up and pray more for them, getting closer to God myself in the process. I'd been so self focused, now I'm definitely focusing on praying and supporting those around me. I've seen how much community is needed, ironically, outside of living in community! ;)

My new office is in the same building as the seminary for the Archdiocese of Washington and the guys are moving in today. I went for a walk at lunch and ran into someone I knew from youth ministry in Arlington. He took me in and started giving me a tour of the seminary, and I realized I knew like 5 other guys in there! When I think about it, I probably have 13 seminarians on my facebook, a couple of priests, sisters, postulants...my life isn't normal, I realize. But I'm just so in awe (especially now that I've tried it!) of these men and women who are giving themselves to the Church and Christ so selflessly and faithfully. As Alina and I used to say, 'There HAS to be a God because NO ONE would want to do this [religious life] otherwise!"

I'm really excited to be moving to Silver Spring in less than two weeks! I really think part of the reason I'm back in DC is to live with Susan and Steph. They are such good examples of holy women, living the way that God wants them to live. They will help me transition well, I think, as well as continue to grow. And we all believe in the Gladys Hardy ( an 88 year old woman who Ellen DeGeneres called on her show) mantra of life: "I love Jesus, but a drink a little ;)

Thanks for reading this long blog. I just wanted to share my joy that "I'm back!" in my routine of loving Jesus and focusing on Him as my 'Hebrews 12:1-3" blogaddress states!

Peace,
Julia
Posted by Julia at 2:25 PM No comments: