Meghan and Jordan can drink it up this time around. 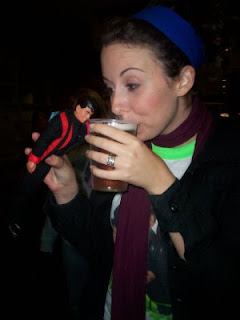 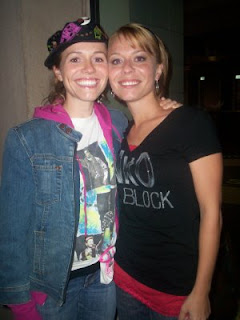 Steph and her sister rekindle the NKOTB love. 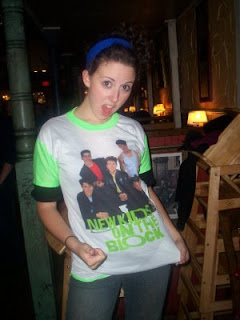 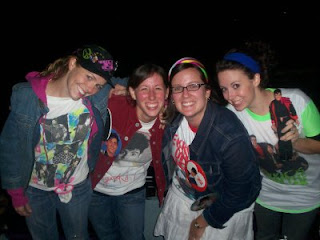 Thanks, Mom, for saving the stuff. We got The Right Stuff! 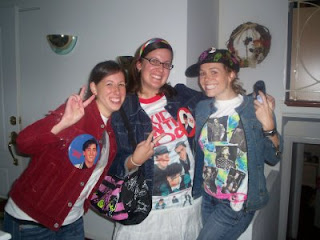 Spoiler alert- if you do not want to know what the New Kids on the Block did in their latest show, read no further ;)
The show last night in DC was PERFECT. Everything 10 year old Julia could have dreamed and more.
First of all, props to my mom because my mom saves EVERYTHING. And these are the times when such a habit comes in handy! I asked her to ship all the buttons, the t-shirts, the hats, etc (the nightgowns were particularly classic) and I must say we were the most decked out that we saw at the show. They even took our picture for Mix 107.3 website ;)
Many people stopped to stare at us, compliment us, as my friends and I walked to the Verizon Center looking like we had come straight out of 1989.
Whoever decided that the New Kids should reunite after 15+ years was a marketing genius. They were still selling T-shirts, posters, and buttons, and women were still buying them!
And kudos to the boys for getting it back together. For as my New Kids books circa 1990 informed us last night- Jon was born in 1968, Jordan in 1970, Joey and 1972....so these boys are now longer 'New Kids', but rather, literally 36-40 year old men.
But, when Joey sang, 'Please Don't Go Girl'....it just felt so right! (he can actually hit all the notes this time around!)
And hit the notes they did. Jordan sang in falsetto the whole night (who, by the way, of course I'm biased, but he's gotten it together since his stint on the 'Surreal Life'. He was looking a little rough on VH1's reality show, but last night he did this extraordinarly cheezy solo with wind blowing up his shirt, but looked so good for 38!)
Let me give you the run-down...because even if you think it's lame, you know you want to know what they sang.
They opened with their new single with Ne-Yo, appropriately titled, 'Single'. Though I'm pretty sure all are married but Donnie, all of the ladies in the audience (and it was ALL ladies. All in their 20's and 30's like us. So brilliant) went nuts, and we screamed like little girls through the whole show! It was reminiscent of one of the many Nsync shows I'd been too, though this time the girls weren't twelve and we were all drinking beer ;)
Then they did a medley of the classics: please don't go girl, the Right Stuff, My Favorite Girl...
They had a section in the middle of the show where Joey and Jordan broke out their 1998 career boosts- Joey Joe's Gospel hit, and Jordan's 'Give it to You'. Joey also showed some moves from his 'Dancing with the Stars' days. The boys can still move. Seriously. No hip replacements yet.
They did the new hits 'Summertime' and their songs with the Pussycat Dolls and Lady Ga Ga, which I could give or take...
but my favorites were still the ones that made me swoon back then, like 'TONIGHT' and "I'll be loving You Forever" (which I sang and played on the piano in a 4th grade talent show. There, I said it).
The encores (of course) were Step By Step and Hanging Tough
I have to hand it to the boys- they owned the old school and still looked amazing with all the dancing. I'm pretty sure they are actually better this time around, since they actually have to prove they can sing and stuff, considering they are now 40.
Ah, it was so worth every penny! I finally got to live the dream. I felt like it was 1989 all over again, and I kind of wish it were.
So, thanks NKOTB, for making us all feel young again.
Peace,
Julia
Posted by Julia at 8:42 AM No comments: