May is recognized throughout the Catholic Church as a month dedicated to Mary. When the RCIA program ended this year, the Faith Formation coordinator at my parish asked if I would help with an adult Bible Study with the focus being on Mary. Despite my struggle (that I've documented on this blog more than once) with connecting with the Blessed Mother, this year, I have been called upon- at least 3 times now outside of my own classroom- to speak about her and teach about her to others. So, in the spirit of Mary's "fiat", I suppose, I said "yes."

I was a little bit nervous, but my parish was using a video and workbook series that already had the lessons planned out for us, and a deacon at my parish was also going to help lead the sessions. As the Faith Formation coordinator said to me: "Julia. You are a teacher. You will be fine!" The study would consist of 4 weeks of meeting, watching the prescribed videos, small group discussion, and "homework." I knew I could handle it.

The first meeting was simple: introductions, meeting the other folks joining the study, and watching the introductory videos. A bible scholar taking us through the Holy Land and Mary's hometown of Nazareth appeared on the screen and didn't really tell me anything I didn't already know. The workbook was divided into sections based on the few times that Mary is mentioned in Scripture: her Annunciation with Gabriel, Visitation with Elizabeth, the Nativity, Presentation and Finding in the Temple, Wedding at Cana, and with John at the foot of the Cross. I could have predicted these lessons as well.

I took the workbook home, and being the study facilitator, I decided I probably should at least try to work through some of the Scripture verses set out for us to work with, even if I knew all the verses already. I felt like my students probably do on a regular basis, flipping back and forth between Old and New Testament as I jotted down answers to pre-written questions. The parallels that were made for us were also somewhat predictable for me: Old testament prophecies of the Messiah being born of a Virgin, David rejoicing bringing the "ark of the Covenant" (a term we use for Mary) into Jerusalem....it didn't look like my epiphany with Mary was going to come any time soon.

May started out more difficult that I thought it would, too. I thought that after the late Spring Break in April, the end of the year would seem like a breeze and would go quickly. This has not been the case. I don't pay too much attention to astrology, obviously, but it was said that early May had a whole lot of retrograde going on and for whatever reason, I felt it. Things just were not sitting as they should. May was supposed to be a breeze! This Bible Study was supposed to bring me an epiphany in which I would finally "get" Mary! The Easter Season is supposed to be joy filled and my favorite time of year! 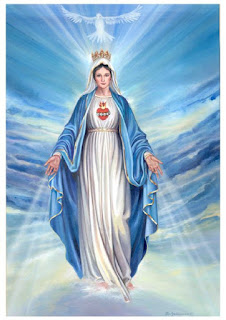 I really like this image with the Holy Spirit descending upon Mary as we are approaching one of my favorite feasts, Pentecost! Come, Holy Spirit!

Today is the feast of the Ascension ( well, last Thursday was- 40 days after Easter- but our diocese celebrates it on the Sunday after), which is an important feast in and of itself, but also begins the count down to Pentecost and the end of the Easter Season. This is typically my favorite time of year. And things have begun to settle down. The school year is winding down, we have the 3 days Memorial Day weekend (which I've taken just to relax and gear up for summer), and the Bible Study is winding down as well.

As I completed the "homework" for the last bible study session, I once again kind of brushed through the Wedding at Cana lesson, knowing the story somewhat by heart. I get that there is huge significance to this story. This is where Jesus preforms his first miracle and thus begins His mission. And it starts at a request from Mary. She plays a key role in His ministry from the start. Which started to get me thinking...

God entrusted a woman to help bring about salvation for us all. And not just a woman, a young, teenaged-pregnant, Middle Eastern woman. Our society today still has an emphasis on male leadership, but it was even more-so back then. God continually broke this tradition despite its dangers and its anti-status quo. I wrote one of my research papers for my Masters degree on Old Testament women and their role in Salvation History: Sarah, an old woman, despite convention, starts salvation history with the birth of Isaac. Deborah and Jael- a judge and a harlot- help to conquer part of the Promised Land. And Jesus throughout the New Testament looks to and cares for women when other men in his society shunned them: the woman at the well, the woman caught in adultery, Mary and Martha (the sisters of Lazarus), Mary Magdalene...

And then our Bible Study took us to the foot of the Cross. Mary is mentioned here as Jesus, on the cross, looks to her and tells her to behold St. John the Beloved as her son and St. John to behold her as his mother. Essentially, Christ is giving Mary to all of us as our Mother through St. John. He wants us to look to her and she will look after us. But again, I have known all of this. It hasn't meant much to me, even though it perhaps should.

It was something else in this setting of the Passion that finally started to turn my heart to Mary. The author of the study had us look up a verse which mentioned that the apostles "scattered" during this time of the Passion and Crucifixion. Mary and the women, however, stood with Jesus at the foot of the cross. This finally struck me with the courage that Mary and these women had. When Jesus' male friends were fearing for their lives, the women were courageous and loyal. They stood by Jesus until the end when Jesus' male followers could not and did not.

Women are naturally loyal, compassionate, and strong. God has shown us this throughout Scriptures. Why, then, do we continue to cast women as meek or submissive? Irrational? Emotional? This woman that the Church holds in such high regard, why do we diminish her to this submissive servant when she was courageous, bold, brave? In the scenario that I almost looked over at the Wedding at Cana, she is the one who told Jesus that He was ready for His first miracle. She nudged Him to begin His ministry. How many times have women been the "nudge" for men to go on and then do great things with no recognition?

In this day and age, to still cast women aside, to still assume that we have no voice, to still not look at us as equal is to do a disservice to women and the plan God clearly has for women. I, too, used to view Mary as meek and reserved. But in these latter stories in particular, I no longer see her as such. Perhaps in the beginning, as a young, teenaged, extremely devout, sinless girl greeted by an angel- I cannot relate to her. I can admire her. I can aspire to be that obedient and open to God's will. But later, as she grows in age and in her identity, she is bold, she is fearless- openly telling her Messianic Son it is time for His mission to begin and standing fearlessly- when other men scattered- with Him at the end. This is the Mary that I can get behind. And this is the Mary that we should elevate and remember as well as her obedient "fiat".

Even after the Annunciation from Gabriel, Mary immediately takes action. The angel mentions that Mary's older cousin, Elizabeth, has also conceived a child. Mary immediately goes to see her cousin. I have to imagine that she was curious. I'm sure she also wanted to be there for Elizabeth. She was compassionate. She bravely traveled as a young girl to see her older cousin, seeking answers to the questions she was "pondering." She didn't merely sit and ponder like I was sometimes was thought to believe. She sought answers. All while risking her life in her time and culture with this unconventional pregnancy.

These qualities of Mary: her curiosity (she is continually "pondering all these things in her heart"), her bravery, her boldness, her strength, her taking action, her loyalty, her faith...these are qualities that I can relate to with Mary. I wish our culture would uphold these qualities in her and other women for all to see as well.

As we head towards Pentecost, I am again praying the traditional novena to the Holy Spirit. And I am not praying for anything other than just that, really. I'm praying that the Holy Spirit will send down Its gifts so that we can grow in insight and be moved to do what's best for our world, for our country, for this present time.