Well, we are two weeks in, friends. Two weeks of Lent down, about four to go. We are still a month away from celebrating Easter, for better or for worse. I know for me personally, I can use the extra time to more fully enter into this Lenten season.

These first two weeks have gone slowly, but also quickly. I find myself saying: "ONLY TWO WEEKS?!" (I gave up Facebook and snacks this year. I'm not missing Facebook much at all, honestly. But THE SNACKS. Oh, the snacks! That's how you know it was the right sacrifice to make...) but then also in the same breath saying: "Oh, good. Phew. Only two weeks. I still have time to enter into this Lenten season." 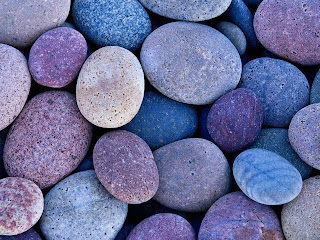 The quintessential Lenten rock reminder: In the Gospel on the first Sunday of Lent, we hear about the devil tempting Jesus to turn rocks into bread. Jesus, of course, does not. And so, the rocks are reminder of Christ's victory over temptation and the devil.

Lent is a time of self sacrifice, but yet, I have been kind of self consumed these weeks. I had been looking for a part-time job, so I had been interviewing (talking a lot about myself and how great I am!) and was offered two (obviously, only took one!). Now, I have been trying to acclimate to my new potential schedule and job, and not leaving a ton of time for sacrifice and prayer in between.

But the moments that have called me back have been praying the Lenten novena that I have promised to pray for some intentions, certain moments with my students in my classroom, and nights spent in community with the RCIA candidates in my parish.

The journey for those entering the Church this Easter has picked up its pace as we get nearer to the big day. And it is amazing that I can feel the energy and anticipation from the candidates, catechumens, and confirmands (those looking to complete the various sacraments). Tonight, I walked in and the woman that I am sponsoring was beaming extra brightly when she told me: "I had my first confession yesterday!" She was genuinely excited and clearly full of the Holy Spirit. Just today I had talked to my students as they bemoaned having to go to Confession themselves tomorrow at school. It's amazing how we take the sacraments for granted. If only we could approach every time like those who encounter Christ for the first time.

Another man tonight at RCIA who had been brought into the Church last year, shared his testimony and I am always moved when these men and women tell of how they came to know Christ and why they wanted to seek Him in the Church. The young man told of how he searched academically for so long to find the right faith, but it was in discovering that through Baptism that he would be an adopted son of God that finally moved his heart. Since so many of us cradle Catholics are baptized as infants, I was almost envious of his conversion experience. But then I remember that I, too, have had many beautiful moments of conversion, even if I had been brought into the Church before I really knew what all of it meant.

At school, a curious student had asked me today: "why are we told to give everything to God?" It was almost as if she thought we shouldn't want to burden God with our problems, and sometimes we may feel that way. The question caught me off guard, but in a good way. In my explaining to her that God WANTS us to lay our burdens down on Him as He takes them to the cross, and takes them on Himself, I was reminded that I need to slow down this Lent and give everything- especially in this Lenten season- over to Him.

Finally, a happy moment from this beginning of Lent: I had been ministering communion at Mass while at school one Friday and found in my communion line a girl that I went to Catholic University with! She had moved to Richmond this summer as well, and we were able to exchange information and get together on the first Sunday of Lent. We went to Mass and brunch and got to catch each other up on all of the crazy things God had been doing in our lives. It was nice to recount where God has taken us- she herself having gone through the RCIA process while we were in college. God works in mysterious and perfect ways! 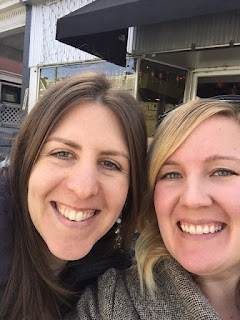 Come, Lord Jesus, as we seek to follow You and grow closer to You this Lent. Amen!

And that's my Lenten check-in so far! May we journey even closer to Jesus!