Why My Memoirs Will Be Published Posthumous

Hello, all from sunny (and apparently beautiful) Ohio!

My sister and I have a "girls day" planned for the three of us today to celebrate, but before my sister arrives, I decided to go for a little walk/jog around the ol' neighborhood.

Sidenote: Apparently the effects of turning 30 arise when attempting to jog on solid ground instead of an eliptical machine. My roommates can attest that I have been going to the gym faithfully this summer, but MAN my muscles hurt right now! When you can feel the different muscles that you use for various physical activities, I think that means you are old.

I am also showing age because this path that I took for my walk-jog was one I crossed MULTIPLE times a DAY when I was in my early teens. Many of my friends lived in an adjoining neighborhood and we would ride bikes/walk back and forth, ALL DAY, EVERYDAY in the summers. I could barely jog it once today. Me= Old.

As I was making the incredibly nostalgic, non-creepy trek past an old friend's house (which they no longer live in, mind you. I was just checking up on things because that's what my family DOES. My Babci does the same thing. You go past other people's houses to see what bad shape they are in now that the family you know is gone. It's a thing. Try it sometime) and I was walk-jogging, I thought about many high school/teenage memories that I can now actually think about and ponder without getting angry or nauseous. (I was a TEENAGER. I was ANGSTY. Everything is vomitous when you are 13...)

Which made me think: I've mentioned to several people of late that one of my goals in life is to publish a book before I die. People's proper response is then: "Oh! Okay...what kind of book would it be?" And I answer something similar to this blog...spiritual reflections or funny anecdotes about the realities of life. I even have some working titles that my friends helped me design: Beer and Highlights: The Julia Strukely Story, Holy Hours and Happy Hours, and one of my chapters will certainly be entitled: "How an Urban Outfitters Dress Changed the Course of My Life."

So I've got the titles, but trotting through the old neighborhood today I thought: I could never publish such memoirs while myself or anyone I know is alive. Not that I would say such horrible, terrible revealing things, but no one ever remembers stories the same way. Whatever story I would tell, someone from my past inevitably would say: "oh, I don't remember it like that" AND any terribly traumatic event USUALLY involves other people when you are growing up...who wants to talk about how tramautic something was for themselves when it probably was no big thing for whoever you were with? That's embarrassing.

I think I'm just going to bank on the latter- wait 'til I and everyone I have exploited ( I mean, er, mentioned) in the memoirs are dead and then take the risk that I will still have left a big enough mark on people I didn't know in my early years who will want to read it.

Is this too morbid for a beautiful summer day? I'm just saying. I don't understand who writes memoirs these days...it is COMPLICATED. I hope Justin Beiber didn't name names...

Sorry this wasn't theological in any way...until next time! 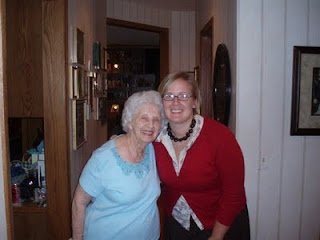 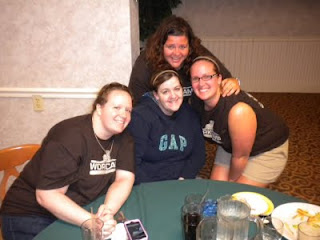 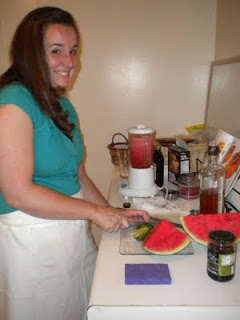 above: My Grandma Strukely and I in 2007, Workcamp friends and I, one of my new housemates making margaritas on the 4th!

Time for a summer update! It's been a couple weeks and a lot has happened.

After I rounded out the school year and wrapped up my first year of teaching, I went down to Richmond and witnessed my dear friend become a priest! But I already said that in my last post :) After the Richmond trip, my week was SUPPOSED to be a segway into a relaxing summer, getting settled in my new house, and preparing for Week 1 of Workcamp (which i believe I also mentioned previously).

However, in a sad turn of events, my family lost my Grandma Strukely the Tuesday after I returned from my weekend in Richmond. She was in a nursing home for the last few years and going to be 95 this year, so she definitely lived a full life. But that doesn't make it easier. She was a super classy lady and will be missed. If you will indulge me, I'll share a little bit about what made Mary V. Strukely just that classy:

I never met my Grandpa Strukely who died when my dad was only 7. He had lung cancer and it was my Grandma who cared for him as well as their 3 children (my dad and two aunts) when he was dying in their home. If that doesn't spell strong woman, I don't know what does. She never re-married, and raised my dad and aunts on her own. Again, such a strong lady!

In all of that, though, she was never very vocal. Never really complained (my other grandma- aka Babci- is most likely where I get my sass from ;) From my Grandma Strukely I like to think I inherited my love for the finer things, pearls, and nice clothes :) My dad's family wasn't incredibly wealthy- again, single mother of 3!- but she always looked nice, always had her hair done and lipstick on :) Classy!

I also like to think I inherited my Grandma's strong faith. I actually got to meet with the priest with my dad and aunts before the funeral because I was coordinating music for the liturgy (I played and sang for the funeral with my dad- so special! I know Grandma loved it :) and when we met with Father, he was impressed that my Grandma- though raised Byzantine Catholic herself- stuck to her commitment to her husband and the Church to raise the children Roman Catholic. She never learned to drive, and made the kids walk to Church ( I remember walking with her when I was little too- in the snow, uphill, for 6 miles....jk). I also remember talking with her as I was discerning religious life and her respecting my decision and sharing with me her fond memories of the traditions of the Church such as liturgy and Adoration.

So I made an unexpected trip home to Ohio before Week 1 of Workcamp and celebrated my Grandma's life with my family. It was a pretty beautiful funeral, after which, we had a Manhattan (her drink of choice- classy!) in her honor.

Since I arrived to Workcamp a couple of days later than usual, I actually had energy for most of the week (unlike some of my colleagues, perhaps ;)I got to help with music as I have in the past and I am always very humbled by how hard everyone works to put that camp together. We may get tired and get frustrated with each other, but it is hard to say NO to someone, when everyone is there of their own free will, just trying to create a prayerful experience for the teens we minister to.

With also just celebrating the 4th of July (we celebrated in our new house with a couple cocktails and small get together, then my housemates and I went over to a nearby house in the neighborhood where a community of religious live. But I'll get to that later ) I refelcted a little yesterday on this "YES" that Christ gives us with our freedom. We get to hear and say "YES" a lot more than others here in this country. And we, of course, abuse that privilege often.

I am starting to do work for my directed research course for grad school, and my spiritual director suggested I take a look at the figure of Sarah in the Old Testament who I feel like I do have a connection with. As I was reading, I found that she played the submissive wife role a little bit and went along with Abram's suggestions (like pretending to be his sister instead of wife to trick the Pharaoh in the early days!) We all know that I am NOT the submissive type, and so it is hard for me to identify a little bit with these women in the Bible who seem to always say "Yes". I have to wonder if their "yes" was not always out of free will, but because of the signs of the times and oppression.

And so my meditation has been on- in light of Workcamp, my Grandma, and the 4th- this free yes. When we say it freely, it is a beautiful thing- especially because of the freedom we have. When we have the choice to say "no" but say "yes" in certain cases, it is a beautiful thing...like Mary's "yes" (or fiat) for example. We honor and treasure that yes because she allowed herself to suffer so that we all might live through God's son.

A friend who was just accepted to the seminary for our diocese and I were reflecting on my experience of discerning religious life. I was reminded of the fact that God wanted me to just say "yes" in that moment, even though it didn't end up being what He wanted for me forever. It was a "yes" to doing whatever He wanted with me, "yes" to giving up things He knew I loved...and that was enough for Him.

I continue to contemplate what He wants me to say "yes" to at this time in my life, but I do know I'm grateful for all the "yes"'s I've heard from Him lately- YES to directed research in grad school, YES to a new household full of holy, Catholic women, YES to a job that I currently love!

I mentioned that my new house is in close proximity to a religious community (of course it is! This is my life ;) . As I was walking from our house to theirs, through the wooded area behind a church that is also close to our house, looking at the Stations of the Cross- I just had to ask myself, "who AM I???" Does anyone else have their own little Narnia where they pass from one part of the neighborhood to this mysterious religious wonderland?? So crazy. I've had so many unique experiences with the Church and I'm not sure what the Lord is doing, continuing to introduce me to new people, new communities, but I'm very grateful and I see his hand in it.

That's it for now. I shall continue to say "yes" to summer :) Hopefully that will involve some pool time at some point! I know it will definitely include another Workcamp at the end of this month, another visit home to celebrate my mom's bday, and probably some lesson planning and research..

until then, Happy Summer!