If you have been following any platform of social media in the past year and a half, you may have noticed the backlash surrounding the phrase "thoughts and prayers." If not, I'm not sure whether to commend you for being able to remove yourself from social media in such a way that you've avoided this, or to ask if you regularly frequent figurative holes to reside in.

Joking aside, as a Christian feminist I have struggled with the backlash against this phrase. I appreciate the sentiment that those opposed to the phrase are trying to express. Namely- in the case of natural disasters, mass shootings, war, and other situations that demand governmental and humanitarian response- saying that "our thoughts and prayers are with those affected by (insert tragedy here)" is not enough. Natural disasters require aid. Mass shootings require a change in gun laws. War torn countries require our attention, action, and help.

However, as a Christian woman, I do believe in the power of prayer. So hearing things like "you can keep your thoughts and prayers" can be a response that I sympathize with but also isn't necessarily helpful in trying to build an effective dialogue that will allow both sides to come together on these issues that for whatever reason divide us. What can maybe be an appropriate response on both sides to situations that require faith but also action?

As a Catholic, I have always been taught that faith and works go together. And as a Scripture scholar, I go to the Bible for guidance. St. James' letter is the text most often quoted on this idea of faith and works being dependent on one another:

"What good is it, my brothers, if someone says he has faith but does not have works? Can that faith save him?
If a brother or sister has nothing to wear and has no food for the day,
and one of you says to them, “Go in peace, keep warm, and eat well,” but you do not give them the necessities of the body, what good is it?
So also faith of itself, if it does not have works, is dead."- James 2:14-17

But on the opposite side, we need not neglect the power of prayer if we are persons of faith. Jesus says in Matthew's Gospel while debating the devil in the desert:

"one does not live on bread alone, but by every word that comes forth from the mouth of God."- Matt. 4:4

"He therefore let you be afflicted with hunger, and then fed you with manna, a food unknown to you and your ancestors, so you might know that it is not by bread alone that people live, but by all that comes forth from the mouth of the LORD." - Deut. 8:3


And later, the book of Deuteronomy goes on further to say:

"But when you have eaten and are satisfied, you must bless the LORD, your God, for the good land he has given you."- Deut. 8:10


In other words, when the work of the Lord is done, we should not forget Him and give thanks.

But not everyone in our society believes what we believe as Christians. So our thoughts and prayers may really not mean much to them. It doesn't mean that we cannot give them, but we do need to do more.

Christ says in His Sermon on the Mount in Matthew's Gospel that we should keep our prayers in secret and not go boasting about them (Matthew 6: 5-8). However, He also says that "where two or three are gathered in my name, there I am with them." (Matt. 18:20). So which is it?

Sin is always about our intention. That is to say, no one can know if our intentions were good or not, ultimately,except for God. We may really truly want to help people with our prayers, and we can certainly pray for them. But only God will see those intentions and prayers initially.

There is a famous quote that is attributed to St. Francis of Assisi: "Preach the Gospel at all times, and when necessary, use words." This is to say that we can live and communicate the Gospel through our actions and we know the other adage that accompanies this: "actions speak louder than words."

I believe that St. James and St. Francis took their cues from Jesus. They saw Him both speaking AND acting: from His many miracles of healing to His physical action of giving up His life. The action and image of the cross certainly says more than we could ever say or think. And that action was His prayer.

Peace,
Julia
Posted by Julia at 4:13 PM No comments:

Happy Valentine's Day/Ash Wednesday! The joke going around social media this year is that we are putting the "lent" in Valentine's Day today. I'm sure St. Valentine would have wanted it no other way.

Some years, Lent just kind of creeps up on us, especially when Easter is early, which it is this year. However, in a shocking turn of events, I actually find myself more ready for Lent than I have been in a long time. I credit the new communities that I have found myself a part of this year and specifically a group of ecumenical Christian feminist bloggers.

The lady-bloggers and I are in the getting-to-know-each-other stage of the relationship, and we are taking the time to share reflections in a group chat and some of us are even trying the Whole 30 together. Nothing says sisterhood like helping each other get through 30 days without cheese, wine, and carbs!

We also decided early on to do a Lenten devotional together. The one that we chose is a study of Exodus.

Exodus is one of the books of the Bible that I enjoy teaching in my Scripture course and my students enjoy learning about. It, of course, has huge significance in our Christian Paschal Mystery since Jesus was celebrating Passover when instituting the Eucharist at the Last Supper. I'm not sure why, then, I was surprised that our Lenten devotional is truly focusing just on the Exodus story and not much else. And even though we are just one day into it, I'm already totally on board with the journey that it is going to take us through.

Exodus starts where Genesis leaves off. Joseph of "technicolor dreamcoat" fame is the last major patriarch we read about in Genesis and he has risen to power in Egypt and the rest of Jacob's family has come to join him due to famine. At the beginning of Exodus, however, the new pharaoh in Egypt is not having any of Joseph's fame and has decided to oppress the Israelites, making them slaves.

It is not lost on me that we start Lent thinking about oppression. We think about the oppression of our sin. We think about the things that weigh us down and hold us back from uniting more fully with God. I feel like I can see where this devotional is taking my lady-bloggers and I, but we all know what happens when one "assumes." I'm going to try and keep an open mind.

In thinking about oppression, I can't help but think of all of the different groups of people still oppressed around the world. Victims of human trafficking. Victims of oppressive governments. Victims of racism and sexism. And today we watched on the news yet another school shooting take the lives of innocent school children. I believe that our own society is oppressed by our selfishness and enslavement to big businesses, political parties, and lobbies like the NRA. We are so trapped that we can't stop something so simple as not allowing gun violence to continue to take the lives of our citizens.

I am praying that as we continue through this Lenten journey, we will be liberated in some way from the oppression of this world and realize the freedom that we have in the truths of Christianity-two of those truths being Love and Forgiveness. And I believe in the power of prayer, but I know that action needs to be taken as well. I'm interested in looking closely at Moses as the model for this as the ladies and I move through the study. 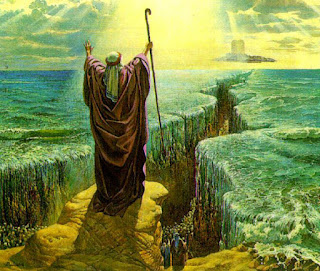 God liberating His people through Moses is one of the quintessential salvation stories. Second only probably to that of  the ultimate story of salvation- His Son's saving us by His Cross and Resurrection. I am looking forward to diving into this mystery with Moses and with a community that I very much prayed for last year.

Something else that I am doing for prayer this year, is something that I have modeled after a friend that I have kept in touch with from ministry during my time in Arlington. Each year, she asks for prayer requests from others on social media and commits to praying for them each day of Lent. I have taken a page from her book this year, and asked for intentions via social media. I have made a list and am keeping them close as we journey towards Easter. Know that readers of this blog count as well :)

I'm praying that this is a blessed Lent for all of us this year. One of true love and liberation.