Today I Rant About Seafoam 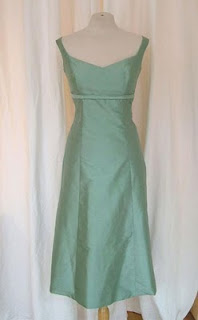 Seafoam or Seaglass? Please someone tell me the difference.

Disclaimer: This post will not be theological in content in any way. But will have everything to do about my life ;) Well, not everything. I am already disgressing...

By some dumb, er, luck? I have been getting a free subscription to Better Homes and Gardens magazines. I still feel like someone signed me up as a joke or it is being sent by my mother in hopes I would grow to love getting recipes and kitschy kitchen ideas.

I should also preface this post- I am kind of the anti-Martha Stewart. Don't get me wrong, I can throw a good party. But I usually just take care of the guest list and booze when our roomies have a get together. And frankly, if the party doesn't have winebottles and/or beer ("recyclables" as my friends and I call them) then I don't know if it's a party I want to be at. Humph.

So I get Better Homes and Gardens. And they pretty much sit there on the coffee table and mock me about how little I care about having a better home OR garden. My roommates, however, do subscribe to the Real/Simple/Martha Living mags, so I suppose the Better Homes ones don't stick out TOO terribly much in this house. I just mostly use them as coasters, though.

Well, folks, today I decided I was going to be a big girl and open the infamous mag over breakfast. And it almost had me too. Almost.

I almost wanted to know about 15 ways to prepare watermelon and 5 great ways to skewer shishkabobs.

I stumbled upon the "better homes" section, apparently, and there were articles telling you how to add color to your house (they even suggested colors for laundry rooms. Really? Do you WANT your laundry room to look appealing so you spend more time in it?) and I read these words that let me know I wasn't ready for Better Homes OR Gardens:

"Seaglass is the new off-white".

This sentence spoke volumes to me. 1.) what the heck is seaglass? The fact that I didn't know it was a color, let alone trendy, made me feel isolated 2.) I didn't know off-white was ever "in". Really? I do know that it is universal...is seaglass really universal if I don't know what it is?!

Now I can keep up with fashion. I LOVE it. So perhaps, if these colors were being applied to a new shift dress rather than laundry room wall-color, I wouldn't have stumbled so much over the words.

But seaglass? This word to me means class separation. I don't know that seaglass is a color. Does that make other BH&G readers better than me???

The color I DO know of is seafoam and I mostly associate that with 80s bridesmaids dresses. I actually think seaGLASS is EXACTLY the same as seafoam but paint marketers didn't want that association. You can't fool me, Better Homes and Gardens. You are just trying to dress up seafoam. You can't put seaglass on a pig. It's still seafoam.

In other news...I went to St Louis this weekend for the first time in two years! Still processing the experience, but I can say it was certainly blessed. More theological reflections and life updates to follow!

In the meantime, contemplate the meaning and deception of seaglass...