Running for 'The Hills'? 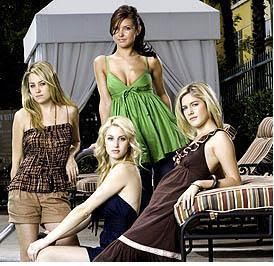 My Tuesday night television watching just hasn't been the same since the first season of Glee ended a few weeks ago. Namely, that there is NOTHING I find worth watching on Tuesday nights now! If I were taking classes right now, this wouldn't be a problem as it would force me to get up off the couch and actually STUDY. But it's summer! And I want to veg and watch some reality TV and campy musical sitcoms.

So I found myself turning on The Hills marathon, as the series finale was last night. I haven't watched MTV since I used to sneak into my parent's basement and watch Season 3 of the Real World while in junior high (that was the San Francisco season with Rachel and Puck. You know, when the show still dealt with real issues like HIV, politics, and when they had careers? Now it's just seven strangers drinking. No thanks. I can see that any night out in Adams Morgan if I want to).

Okay, so that's kind of an exaggeration. I have watched The Hills before. My roommates and I have watched maybe 2 or 3 episodes together in the past, only to mock the long, empty gazes the actors/characters/whatever exchange amid conversations about parties, shopping, and...that's about it.

So imagine my surprise last night as I actually UNDERSTOOD one of the "characters" and (almost) knew where she was coming from! She wasn't talking about money or drugs or plastic surgery, she was talking about finding herself.

Since it was the series finale, MTV has to tie up their "storylines" in a pretty little bow. One is taking the 'next step' by buying her own place, one is moving in with her boyfriend, one is getting sober (I wish I were kidding). And this last girl decided she needed some time alone, away from everything and was going to take a trip to Europe for an indefinite amount of time.

When she was talking about needing to move on and go do something for herself, she used a phrase that went something like, "I need to be scared" and it struck me. Mostly because that it was an odd phrase, but also that I kind of got what she was trying to say.

The times in our lives where we find out who we are usually involve some kind of risk or fear factor. Now, we can't live inside this fear, but when we are afraid, it puts us into survival mode. We have to look inside of ourselves and say, "No one else is around me now. What do I believe? What do I want for myself? What do I know how to do that will keep me going?".

Now, I don't know if that girl ended up going to Europe or if it was just a storyline MTV came up with (the show ended up weird where they let the viewer "in" at the very end and showed a Hollywood lot and cameras, leading the viewer to question, was any of this real? Not that we are surprised if it's not...) but I had to applaud her self awareness or desire to make herself vulnerable for the sake of learning about herself. Even if she didn't come up with this idea on her own ;)

To switch gears and make this theological....Reading The Sanctifier and learning about the Holy Spirit, I've come to learn that the Holy Spirit and it's love possesses us. Or It should. And this is scary for us, I think. We are taught as humans we shouldn't be enslaved or possessed by anything, and that is true! We shouldn't be consumed by our possessions and certainly should not enslave another human being!

I found myself relating to a character on The Hills last night, and that was scary! ;) And so is letting ourselves be docile to a Spirit. But the character was speaking some truth, and the Spirit just wants to possess us with love. So who am I to limit how the Spirit works?

Does that have us running for the Hills? Um, lemme check: No. But making ourselves uncomfortable, nervous, or even a little "scared" in order to rely on the Spirit and let Him possess and direct us? I think, like, omg, totally ;)

Brilliant! I agree on everything from missing GLEE to relying on the Spirit. Well done, girlfriend! :) (I read your article on Volunteer Service on iiBloom and thought I'd visit your blog, too. So beautiful!)

Peace in (never out!),
-Michelle