Shout-out to St. John the Baptist

A few of our saints in the Catholic Church get more than one feast day to recognize and honor them. Obviously, Mary, the Mother of Jesus has numerous feast days throughout the year. My favorite saint, St. Paul, has at least two that I can think of. Today's saint- St. John the Baptist- also has at least two days to honor him: one to commemorate his birth and the other to honor his martyrdom.Today, we remember the birth of St. John the Baptist which is actually remembered and recorded in the Gospel of Luke. All of the Gospel writers include John the Baptist insomuch as they mention that he baptized Jesus. However, Luke gives a background to the announcement of his birth and even parallels the announcement of John with the announcement of Jesus. Luke also includes the birth and naming of John which is the Gospel for today (Luke 1:57-80) John the Apostle (not to be confused with today's John, John the Baptist) includes an amazing soliloquy of sorts from John:

"Now a dispute arose between the disciples of John and a Jew about ceremonial washings. So they came to John and said to him, 'Rabbi, the one who was with you across the Jordan, to whom you testified, here he is baptizing and everyone is coming to him.'

John answered and said, 'No one can receive anything except what has been given him from heaven. You yourselves can testify that I said [that] I am not the Messiah, but that I was sent before him. The one who has the bride is the bridegroom; the best man, who stands and listens to him, rejoices greatly at the bridegroom’s voice. So this joy of mine has been made complete. He must increase; I must decrease.

The one who comes from above is above all. The one who is of the earth is earthly and speaks of earthly things. But the one who comes from heaven [is above all]. He testifies to what he has seen and heard, but no one accepts his testimony. Whoever does accept his testimony certifies that God is trustworthy. For the one whom God sent speaks the words of God. He does not ration his gift of the Spirit. The Father loves the Son and has given everything over to him. Whoever believes in the Son has eternal life, but whoever disobeys the Son will not see life, but the wrath of God remains upon him." - John 3: 25-34

This passage from John's Gospel is beautiful to me because it really shows John the Baptist's character. He was a humble guy. He was a New Testament prophet in a time that didn't really have a lot of prophets. He bridged the prophets of the Old to Christ Himself. The prophets in the Old Testament were also strange characters and misunderstood. Many of them were outcast because of the messages that they were given to proclaim. We see John described in the Gospels as living in the desert, wearing camelhair, and eating locusts. But he wasn't so weird that people didn't come to him. John the Baptist had a following of his own before Jesus (at age 30) decided it was time to begin His Ministry. We always describe John the Baptist as the kind of precursor to Jesus. Again, he was the one who continued the ministry of the prophets of old, telling people to get ready for the Messiah, and then actually ended up baptizing the Messiah Himself.

St. John the Baptist could've made his own little following about himself instead of about Christ, but he was always focused on the one to come- the Messiah. John is such an important character because of these things- his humility, his connection to God and the prophets, as well as being the cousin of Christ Himself! And he was proclaiming the Gospel- the Good News of Jesus- before that was even a thing. It isn't until after Christ's Death and Resurrection that we see the women coming from the tomb to proclaim the Good News about Christ the Messiah. And it isn't even until after Pentecost and receiving the Holy Spirit that the other apostles get in on that. St. John the Baptist had the Holy Spirit in a way before any of the other disciples knew what that was. He was the O.G. of disciples. A total hippie/hipster, doing things his own way before it was "cool".

Perhaps this is why I am drawn to St. John the Baptist- not because I am so humble or cool- but because I admire someone who is a trailblazer and does his or her own thing and goes his or her own way. He still had a purpose and a "cause" though, and that sole purpose was always to point the way to Jesus. In the discourse from John above, St. John says his famous quote: "He must increase, I must decrease" when talking about himself and Jesus. That is a motto that is always a humble reminder of what ministry is about.

In this time of quarantine and the Black Lives Matter movement, we need modern day St. John the Baptists. We need trailblazers who are pointing the way to truth. We need leaders who are proclaiming what is true not for their own sake, but for the sake of the greater good. St. John is described in the Gospels as "a voice crying out in the desert". There are voices crying out in our "desert" today. Will we listen to their truth? Or discard them as St. John the Baptist and the prophets before him were disregarded?

When I was in Israel last year, we got to visit the Church of the Visitation- aka the home of St. John the Baptist as a child. We got to see the marker designated as the place of his birth. Earlier that day, we had visited Bethlehem- the place of Jesus' birth. It was very moving and powerful to have our day bookend-ed by these two very powerful, very connected births- the Messiah's and the one who went out before him to prepare his way. 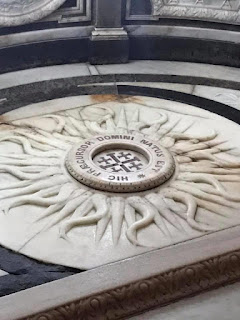 marker in the Church of the Visitation designated St. John the Baptist's birth 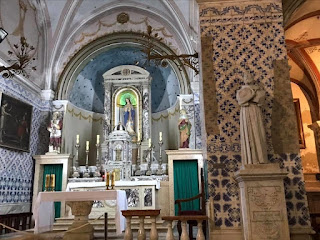 The Church of the Visitation in the Hill country of Judah, Israel. 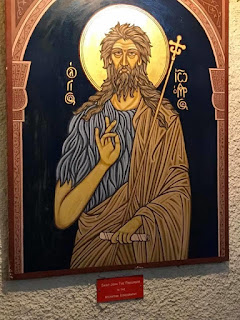 Icon of St. John the Baptist from the Church of the Visitation- love his hippie/hipster look!

This time of quarantine may be a little like St. John's "desert"- a time when we are preparing for something greater to come. St. John the Baptist can be our guide as we navigate through this unprecedented time. May we be humble and ready for when Truth does appear. And may we lead others to Truth, not for our own sake, but for the sake of the greater Good.

St. John the Baptist, pray for us.