I have taken somewhat of an intentional hiatus from this blog this fall. First of all, I've been at this for 10 years! I need a break! JK. I just want to make sure that everything I post is thoughtful and intentional.

Also, if I am honest, I was not feeling like myself this September. I often struggle with the change from the warmer to colder seasons, but this year hit me much harder. I believe the political and societal climate also had something to do with it. Christianity has never been easy in the history of the faith. And we are certainly not having to face the lions pits in the ways of early Roman martyrdom. However, I have felt like Christians have been pitted against each other these days. We should be coming together and uniting against the cultural pitfalls, but instead, I believe that even Christians are divided with our own interpretations of the Gospel right now. I know that this also isn't new. But it has taken it's toll on me and I have had to work through and continue to work through feeling as one fighting in my own lion's den with my own Christian faith on some days.

I have had some changes at the school that were positive, but not without some growing pains. It seems that God heard my prayer from this summer of my wanting to re-claim and once again choose my vocation of teaching. I have been given many opportunities to reflect on my call as a teacher this year and I am continuing to do so.

Many feast days have come and gone. The feast of St. Therese of Lisieux on Oct. 1 was once again blessed with answered prayers. She reminded me of her and God's presence and the grace of prayer. One of the things I had been praying about during the novena was the possibility of quitting my second job. Working long days and shifts on weekends was good for my bank account, but also taking its toll on my spirit. I believe that I got my "rose" from Therese during that novena and finally decided to take the risk and quit my second job. Whether or not the financial cut will bring its own new stressors has yet to be seen, but I know now that getting out of the rut I didn't even realize I was in has been freeing. 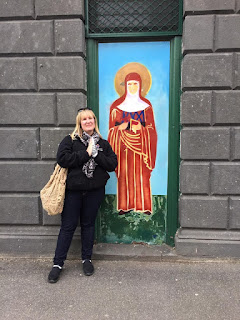 I didn't take a picture of the rose that I got this year, but here is a picture of me with a St. Therese look alike in Melbourne, Australia...

I also started going to spiritual direction again. I had not had a spiritual director since I moved down to Richmond and clearly nearly three years without spiritual direction was also becoming an issue for me. I started meeting weekly with a Benedictine sister and feel like I got the uplifting support and accountability that I had been missing.

All this to say, I think that I am feeling better now. Even though it is getting colder and our political climate hasn't gotten any easier, I feel like a weight has been lifted off of my shoulders. It is amazing what some accountability and positive feedback can do!

Something a Catholic friend tweeted once that has stuck with me is that around this time of year, we start "aching for Advent." It has been well documented that I love New Year's Eve and the new liturgical year. I LOVE the time that lends itself for reflection and am eagerly awaiting the Feast of Christ the King so that we once again reflect as a Church on the Incarnation. I love the anticipation of newness and new possibilities.The new year is coming! We are ending Ordinary Time in about 2 weeks and Advent will be here.

During this time as we near Thanksgiving, I am grateful for all of the above listed experiences. 2017 has been a tough year for our world, our country, and our spirits. However, we know that hardship produces new opportunities and new life. I continue to pray that we can hold on to hope and that there will soon be a calm after this storm.

I figured out years ago that when I have these darker moments in life, that I need to step outside of myself. That is why I took up art a couple of years ago. Being able to create and share with others is essential in tearing our interior clouds away. This Thanksgiving I have decided to volunteer to help at a community meal rather than just take some time for myself like I often do (see: teepee in the mountains from last year!). I also am going to be joining a group of faithful young women tonight in prayer (something else that I had been missing from my DC days).

I am grateful that 2017 is winding down and that weights have been lifted. I know, however, that there is still much work to do. I look forward to tackling it now that I have more time to breathe and have the support that I need.

Despite the darkness that we sometimes may feel, there is much to be thankful for.