This is always how it goes, isn't it? I don't write for a while, and then I have back to back to back posts for two weeks in a row!

I wanted to follow up my previous post because the Lord continues to work in overtime these past couple of weeks for me. He has brought about many graces for me of late and I will take them! As I mentioned previously, the year has been tough and dark at times, but He has reminded me so much of His providence and faithfulness lately. I just have to document it and give Him His due!

In my last post, I mentioned that I had recently discerned quitting my second job as a part-time bartender. Quitting this job, I believe, really freed me and opened me up to all of these graces that I am experiencing now. I took a risk, though, because I wasn't sure (and still am not exactly) if I will be able to sustain my lifestyle without that little bit of income. I will say that when it comes to finances and work, God has always been very, very generous with me. He always provides. Even though I am  a teacher and I don't make a lot, I believe that He knows that I am working for His Church and He always makes sure that I can make ends meet.

For example, in the woman's prayer group meeting that I had last week, I reconnected with someone who also does music ministry. I did not know that she was actively doing music ministry in the area, but she offered to put me on the sub list at her parish so that I could make some extra money. I already have had one opportunity there so far! I also floated my name to some other parish music ministers in the area and received an email from someone I don't even know and he passed my name along to a spiritual leader at a nearby hospital. Their chapel is having an Advent prayer service next week for which I will be playing! It is truly, truly amazing how God provides and how I always conveniently forget this is equally amazing. Ha! 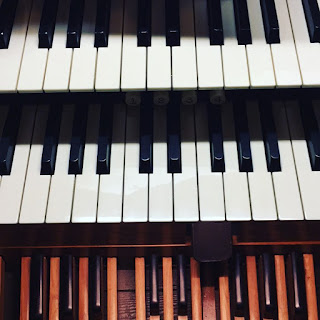 Some of the new gigs may involve me playing the organ, which I don't really know how to play sooo...I decided to try and learn recently!

Like I said, I was called in to sub at a parish already and the Mass was actually for a funeral. Playing for weddings or funerals is always extra pressure because this is a very important event in these people's lives and they are trusting you to help celebrate it. I have been lucky to always have positive experiences, but I still get nervous nonetheless, especially at a parish with people I haven't met before.

The funeral was for an 89 year old woman. I didn't know much about her other than that. That is the other interesting thing about playing for funerals. You don't often know the people who have passed away. The family and guests give you little clues, and I often learn a lot from the homilies and eulogies.

This woman who had passed was apparently always smiling. She also was (from what I can intuit) an accountant and ran some kind of business doing people's taxes when it wasn't common for a woman to do so. The man who gave the eulogy did an excellent job and he read a letter from the woman's granddaughter. The granddaughter said that she was proud of her grandmother and that she was an inspiration to her. She was proud to have a grandmother who was "ahead of her time", running her own business and working hard her whole life. She apparently retired only two years prior at the age of 87! I can't even imagine! But it sounded like she loved life and her work.

It made me think, of course, of my own grandmother who is going to be 95 next year! I, too, am proud of my grandmother and the hardships she has been through. It made me think of what I would say if I were ever in that position and it made me feel for the family and feel closer to the woman who was being eulogized. It is an honor to be let in to those kinds of moments for a family. It's more than just a paycheck.

I'm also really interested see how this Advent service at the hospital goes next week. There are children who will be singing and I will be accompanying them. I went to rehearse with them and meet with the woman in charge this Wed before Thanksgiving. These kids are YOUNG. Like...pre-school to 1st grade young. Those of you who know me, know that working with kids that young is outside of my comfort zone! But I enjoyed meeting them and the staff members at the hospital and I know that the event will be blessed. How awesome that God hooks us up with these opportunities when we need it?? That's what I mean about grace! 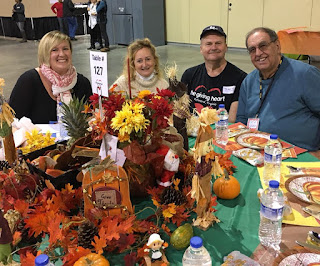 Yesterday was Thanksgiving and I usually spend it with friends in Northern VA, but this year I stayed in Richmond and decided to volunteer. A friend recommended working with The Giving Heart which plans this large meal at the convention center downtown every year. I heard that they sometimes serve up to 3,000 people.

My job as a table host was simply to sit with those who came to the meal and chat with them and make them feel welcomed. My fellow table hosts pictured above and I were fortunate to dine with a family of 5- a mother and daughter, the daughter's boyfriend and two of her friends from her shelter. I was so glad to be a part of this event. Everyone was so, so pleasant and happy. As you can see, table hosts were invited to decorate their tables. I was fortunate that one of our table hosts was a veteran at this and brought beautiful decorations! All of the volunteers took pride in their tables and all of the people we met were grateful and personable. I definitely recommend doing this event or something like it if you are able. I was done by 2:30pm and able to join some friends for drinks and meal #2 after. It was a great way to spend the holiday and what I believe a holiday like Thanksgiving is about. It restored my faith and hope in humanity for a few hours :)

These are just a few of the graces I have received in the last few days. I also was able to spend a couple of nights having good conversation (and beer) with my teacher coworkers and I have started my most recent novena(s) that will end on the Feast of Christ the King and Christmas respectively.

A friend from my volunteer year asked if I had ever made a Consecration to Jesus through Mary (as written and practiced by Louis de Monfort. Many, many of the saints and popes have done this same prayer!). It's a 33 day exercise with readings and prayers that ends on a Marian feast. When my friend asked me if I had done it before, I knew that I had, but I couldn't remember when. Turns out I have made it THREE times! Once before the convent, once in the convent, and once after the convent! 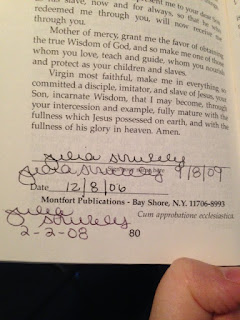 You sign the letter at the end of the Consecration when you finish the 33 days. I definitely don't recall the first two times that I did this! Am I old? Or was I just so taken in by the Holy Spirit? Ha! The former for sure!

So I have started my re-consecration with my friend and we will be ending on Christmas. I think it's the perfect way to spend Advent and definitely long overdue! I'm looking forward to walking with my friend and Mary this Advent season.

Just a few more days of this liturgical year! Get ready for some end of the year posts for Christ the King very soon!

I'm so grateful for all of God's Grace in this Year of Grace and looking forward to what the new year brings.