Holy Thursday is still my fave.

I know I have written about memorable Holy Thursdays past, but the memories continue to be made and remembered each Holy Thursday for me. I got more than one text and/or tweet about my amazing "Last Supper" in my 20s last year and a text from my friend who I traveled to Spain with in 2005 during Holy Week about her fond memories of this day, shoot, seven years ago.

I try to make where I celebrate each part of the Triduum special. This year, I wanted to give my new parish a try, but was a little apprehensive. I love my parish and enjoy going to Sunday liturgies there. They have an awesome holy hour and Confessions each Wednesday evening. Amazing! But they are UBER traditional. Like Latin Mass traditional. Now, we know I love me some bells and whistles, but when it comes to the Triduum, I like to recall how it might have been in Jesus' day and that was probably more wood and dirt than gold and incense.

But I am also kind of LAZY. And since it is my Spring Break, I am just kind of seeing where each day takes me (that is, of course, until it takes me to PUERTO RICO on Monday! :) I could have sought out a Mass that matched more of my spiritual taste, but my parish is within walking distance. So when I finally pulled myself away from the Hunger Games trilogy with minutes to spare to get to Mass, my parish it was!

And it ended up being really nice. I was a little overwhelmed with all the men and boys marching down the aisle  during the processional without even a woman in sight until the psalmist from the choir, but after that, I appreciated alot of their liturgical choices. (NERD!)

Father washed feet of twelve of (the many) altar servers. And I was struck by in all of my Holy Thursdays, I don't think I'd ever seen a priest actually kiss the feet of those he was washing, which Father did and I'm pretty sure Jesus might've too. It was a humbling gesture, I thought, and brought out the sentiment of the action of the washing of the feet.

We sang the Gloria, but to remind us we are still (while not in Lent TECHNICALLY) not quite to the Resurrection, the organist did not play after that. Everything else was acapella which I also thought was an interesting move (liturgically speaking :) The altar server also did not ring the bells at the consecration, but rather hit a block of wood three times, again to remind us of the difference in the events of this evening some 2000 years ago.

My favorite moment of any Holy Thursday liturgy, though, is singing the Pange Lingua and moving to the altar of repose. That was one of my favorite parts of the memorable 2005 Holy Week that my friend texted me about and my parish tonight also made this part of the liturgy really special.

They brought out the umbrella! Okay, so it's called an ombrellino (and I had to google "Eucharistic Umbrella" to find that out...I'm sure that is the true technical, theological definition...)

I've seen one used before in Eucharistic Processions on the Feast of Corpus Christi, but I don't think I'd seen on at a Holy Thursday service. But it makes sense. Even though there for sure wasn't one used on the fateful night itself, I do think it highlights the sacredness of the Eucharist and reminds us that Jesus, our King, is present: 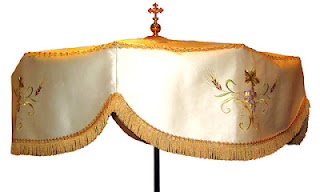 They then had a beautiful altar of repose set up with plants around the tabernacle and I always like to feel like I'm walking with Jesus to the garden after the Holy Thursday liturgy to see if I can "stay up with him for but an hour." (I didn't make it an hour- 40 minutes, though :)

As I walked home tonight, I also thought of the Feast of the Passover from Exodus. I had gotten into a kind of awesome debate about the meaning of Passover and the Eucharist via Twitter earlier today which was kind of an awesome way to start me thinking about the meaning of this feast. (Twitter- the new evangelization, I tell you!)

So as I walked home and saw lights on inside homes and the moonlight shining from above (a full moon at that) I thought of what the night of the Passover in Moses' time would be like. Nowhere near as comfortable as we have it now, probably eerily quiet or mysterious, fearful, and nerve wracking. I imagined the Israelites putting the lamb's blood on their doors in the hope of being saved.

All foreshadowing the blood that we remember tomorrow that was shed on the cross for us.

I'm grateful for a great start to Triduum! Definitely more prayerful and subdued than last year :) What can I say, I'm 30 now! I'm OLD.

Have a blessed Triduum!
Peace,
Julia
Posted by Julia at 10:44 PM

I went to my first Holy Thursday Mass ever last week! I've never been able to go for traveling purposes or what not. It was so wonderful... I see why you love it so much! Though I don't think I could have handled the high liturgy as well ;)