Today is the Feast of Our Lady of Lourdes- the apparition of Mary that St. Bernadette saw in Lourdes, France in 1858.

Many of my closest friends have been to Lourdes and have a great devotion to Our Lady of Lourdes because of it. When this date rolls around, I think of them and the great things that have happened for them because of their devotion. And then I pray that Mary will hook me up as well :) (I did have a friend light a candle for me there this summer on pilgrimmage! So it was like I was there, right?? ) 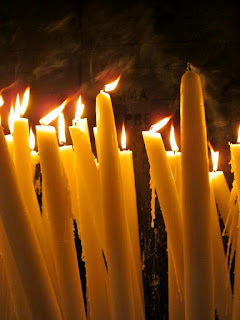 I think it's cool that my close friends and I can share a devotion like this together. But then again, I am a huge nerd :)

In my grad studies and in the readings at Mass this week, a theme that keeps popping up is idol worship. In the daily readings, the stories of David, Solomon, and their successors show how the Israelites were weak and needed a king and then the kings themselves were weak and poor examples to the Israelites.

In idol worship news: Many non-Catholic Christians think that we "worship" Mary. But we believe that she is our strong intercessor and believe that since she IS the Mother of GOD, Christ is likely to listen to her prayers :)

But back to this week's readings...The kings didn't always have bad intentions- we know David's intentions were often good, and God will reward Him with the descendant of Christ Himself because of it- but they often did bend to their own wills or the will of the people. (Solomon- exhibit A: allowing his many wives to worship pagan gods...)

In my grad class we just read Ezekiel and BOY if my students only knew the racy stuff that was in there! They might start to think the Bible was almost as "good" as Jersey Shore!

I always kind of brushed over Ezekiel because I never understood it. And for good reason- his prophecies rival the crazy that we see in the images of the Book of Revelations. Who can decipher it?

No, but for reals...Ezekiel Chap 16 and Chap 23 would get my students interested for all the wrong reasons. Ezekiel swears that God is telling him that the people of Israel are like a man who would sleep with a prostitute and goes into detail. (Also, there is nothing more uncomfortable than reading said details with two priests in a small classroom, one at the age of 90...)

I will never find myself teaching Ezekiel Chap 16 & 23, I'm pretty sure, even though I now know the meaning. Which is a shame, because I think that it is something we can relate still relate to (not the prostitute part!! Get your head out of the gutter...)

Over and over we see the Israelites falling away from God and He keeps sending prophets and kings and judges to get them back. Finally, He sends His only Son who can truly redeem us all.

With Valentine's Day coming up, "love is in the air." But these readings of late speak to me of love (and not because the women in Ezekiel are giving it freely)

I always start out my Scripture course with Taylor Swift's "Love Story" because 1.) I'm hip like that. 2) because I want the students to see that the Bible is God's Love Story with humanity...

The Bible is God continually reaching out to a broken world and THIS is what we can relate to. Our lives and our world is still broken. But we have the Good News that God has sent His Son into the world and we have only to "love God with all our heart, soul, and mind." (Mt 22: 37)

God loves us sooo much! And so I am inspired to share in that love this Valentine's.

ALSO, yesterday, one of the religion teachers at school had a speaker come talk to her students and since I wasn't feeling so well, I hopped on that train and took my students to hear him too :)

It was a guy who I had actually heard speak on Theology on Tap and found his story inspiring. Long story short, he is a young guy who had some huge heartbreaks in his life: loss of his mother, a failed marriage, and health issues. But he took up running and felt God calling him to run across the U.S. and use prayer as his motivator.

I think the kids were inspired by his athletic achievement, but I was inspired by how close he stayed with God. He took prayer intentions from others before and while on the road and the prayers kept him going. And he has heard back from people saying that their prayers were answered. The power of prayer and his commitment to holiness and prayer is really what inspired me.

If prayer can motivate him to run across the country, certainly prayer can inspire me just reap the benefits of a deeper relationship with God! He persevered TRULY in "Running the Race." It's a good reminder that I need to persevere in prayer...even if it seems pointless or hopeless or monotonous at times.

Our Lady of Lourdes, pray for us!

Love that we share this devotion, in addition to many other things! XO