The Birthday of a King

Before the craziness of Christmas really kicks in, I thought I'd write my little reflection on Christmas (does it make it less credible if Christmas hasn't happened yet? Maybe.)

We are finished with school for the next TWO WEEKS! Huzzah! I won't be going back to school until the NEW YEAR. Kind of hard to believe.

And today I had time to do all of the things! Gym, Prayer, and FINISH MY CHRISTMAS SHOPPING! I WIN!!! (as if it were a competition. It kind of was. With myself. I didn't think I could do it, but I did! I got satisfactory gifts for everyone on my list! WIN!)

Of course, I want to share with you the prayer part of this day :)

I went into my prayer time because I felt a nudging to go and I fully intended to go in and complain to Jesus about all the things I WANT for Christmas/New Year.

Wouldn't you know it- in typical Jesus fashion- He had me change my way of thinking so I left there feeling grateful for everything I already have. How Christ-masy of Him! It seriously was like a Christmas special. (no it wasn't.)

Today is Tuesday, so I was praying the Sorrowful Mysteries even though it is Christmas time. It's not the Christmas season YET exactly, if you want to get technical (and I do because I am the liturgy police. Not really. Well, kind of...) Advent is a Penitential season, so I figured the Sorrowful Mysteries were still appropriate.  I was praying the third mystery (Crowing of Thorns) and thought about how Jesus was born to be a King.

THEN that made me think of THIS Song which was on our "Wee Sing Christmas Carols" tape that I made my parents play relentlessly each Christmas for probably every year until I was 18:
(the link is to the Judy Garland version. You're welcome):

In the little village of Bethlehem
There lay a child one day
And the sky was bright
With a holy light
O'er the place where Jesus lay.


Alleluia
O how the angels sang!
Alleluia
How it rang!
And the sky was bright
With a holy light
'Twas the birthday of a King.


Humble birthplace but oh how much God gave to us that day!
From the manger bed what a path has led
What a perfect holy way.


Looking at the Old Testament and Salvation History really does give a different perspective on Christmas. You hear about David and how he was not of "stately appearance" yet chosen to be King. Isaiah prophesies similar things about Jesus and you see how perfectly the Old and the New match up. It's kind of unbelievable...yet...what helps us believe. Both kings, both not what anyone expected. One, the youngest son (instead of the entitled oldest) and a shepherd/hippy musician/songwriter at that. The other, our SPIRITUAL shepherd, born of a carpenter in the city of David...not in some palace.

And what do kings have? Their heralds! In this case- angels. I also really love Luke's Gospel account of Christmas (not just because it's the one read in A Charlie Brown Christmas) but because Luke was writing for Gentiles and used the characters of shepherds to convey how the King is truly for everyone. The angels went to SHEPHERDS to represent the everyman...and also probably to show how this image of shepherd to king, king to shepherd has come full circle.

So even though my last post was about Treating YoSelf, the true Spirit of Christmas is about the sacrifice of God's only Son for us- who was a different kind of King. He would have to endure all kinds of trials, just to complete his mission- salvation for us all. 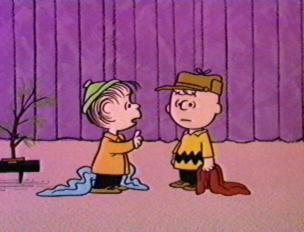 And that's what Christmas is all about...Charlie Brown.
Posted by Julia at 8:28 PM