Things Could Be Worse! Take it from an Old Testament Girl...

Did anybody else read today's readings and react something along the lines of:
"WHAAAA?!! the WHAT?!"

'Cause I did. And apparently I'm not the only one who thought they were blogworthy either.

Didn't read the readings for today? Don't worry, I won't judge. I'll just wait while you go ahead and read the links I posted above.


Not gonna read 'em? Eh, it's okay. I'll sum 'em up for ya. Just a *disclaimer* though, that my interpretation may not be entirely scripturally accurate.

SO there's this Judge Jephthah (yeah, I know. How many H's can be in one name, right?) and he apparently is trying to make a deal with God. This is probably his first mistake. Didn't he learn from Moses and Abraham that bartering with God is probably not a good idea? Remember Abraham's nephew Lot? Abraham tried to bargain for him too. His wife still turned to salt. 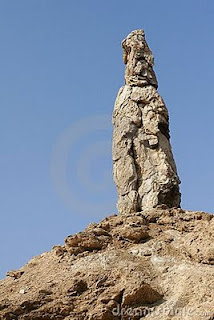 This is apparently Lot's Wife according to Google Image...


So Jephthah's all: "if you let me beat the Ammonites I will offer a human sacrifice to you. Whoever comes through the door next, that sucker's YOURS."

Okay, we'll see King Saul also ready to make crazy deals for these Ammonite people, so I get that they are a real hassle for the Israelites at this point in time. However, HUMAN SACRIFICE?! And God is gonna GO for it?

Not only does God go for it, friends, but he pulls a Job and the next person who walks through the door after Jephthah makes his little prayer is, of course, HIS ONE AND ONLY DAUGHTER. Cue the soap opera music!

(ps- speaking of Soap Operas, I was watching 90210 the other day on Soap Net BECAUSE THAT'S WHAT I DO WHEN I HAVE ONE WEEK OF SUMMER LEFT and Sophie B. Hawkins "Damn, I Wish I was Your Lover" was the jam looped over Dylan and Kelly's summer shennanigans. You know, the time Brenda was in Paris and they cheated? Oh. So. Good.)

ANYWAYS so, Jephthah sacrifices his only daughter! His only child! But not before she "mourns her virginity". Oh, sister. Only adding insult to injury there. Her daddy's gonna kill her and she KNOWS and then she's also gotta go sulk about how she's gonna die before ever having sex. Truly depressing. For reals.

So, I'm sitting in this chapel, looking for my daily inspiration and this is what I'm getting. I try to look on the bright side: Is Jephthah's daughter kind of like Isaac in some way? Isaac was a prefigurement of God offering His Only Son for us later in the New Testament. A "type of Christ". But if I know how the Old Testament is written- and I'm slowly learning- I'm guessing a woman wouldn't be given such weight. And anyway, Abraham doesn't end up actually killing his one and only son. We are told Jephthah's daughter: "...returned to her father,
who did to her as he had vowed." Judges 11: 39a Yikes!!

Thankfully, the Church in her infinite wisdom pairs this reading with Psalm 40 which says: "Here I am, Lord; I come to do your will.
Sacrifice or oblation you wished not,
but ears open to obedience you gave me.
Burnt offerings or sin-offerings you sought not;
then said I, "Behold I come."

Phew! Okay, so God doesn't just want us to offer our firstborns because I was beginning to detect a trend....

You know that I have been wondering what kind of things God is asking me to sacrifice right now in my life, so this reading threw me off a little today. But the Psalm does reaffirm that the CORRECT thing to do is just to be open and say: "Here I Am, Lord" and trust that THAT is what He wants from us.

PS- every image I googled of Jephtah's Daughter showed a really beautiful image of a young girl. Sucks... 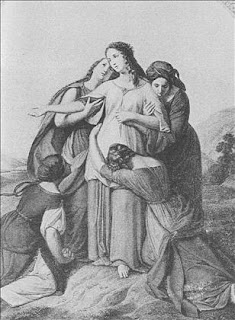 i'm so glad you blogged about these readings! i read them this morning and then couldn't help but comment on them to my housemates in amazement! i had no idea what to make of them other than, "the old testament sure has some weird stuff in it."
then at Mass (at the archdiocese of Chicago officese, mind you) the priest made some joke about not looking forward to having to talk on these readings, and then proceeded to say he was NOT going to talk about the first reading. cop out. so thanks for not copping out :)

Thanks, Melissa! For better, for worse, I never cop out ;)