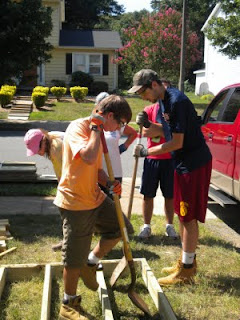 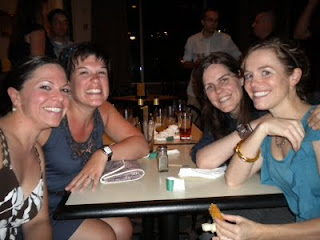 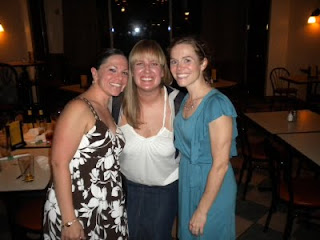 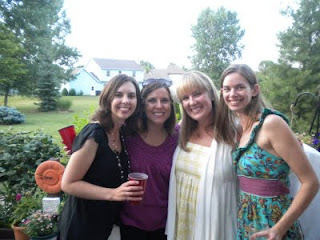 You would think that since I have had a month and some change to be loungy that I would be doing so, but it's ME and when I GET to be lazy, I don't WANT to be. And when I should be doing stuff, I get LAZY. That's how I roll. I don't like to be told what to do and that includes seasonal expectations. Humph.

After TWO trips to Ohio- one in June, one in July and TWO Workcamps- again, one in June on in July- I'm finally choosing to be a little loungy. Don't get me wrong, I've had times in between trips to lounge by the pool, ride my bike, go to the gym...do some things for me. But I'm taking this week off to catch up on some research for grad school (I'm pretty sure I told my prof I'd submit my original outline a month ago- eeps!) and apparently DOG SIT. (I have a colleague who is my new neighbor and I agreed to watch their dog while he and his family went out of town, forcing me to have to be a little loungy this week. I know. WHO AM I?!)

Next week, however, I'm going on ANOTHER trip- this time to Camden, NJ with some students from school as another immersion/youth ministry type trip.

So this summer as turned into the summer of ministry, even though I didn't intend for it to be. I've been seeing some of the chillins' I teach this summer even though I wasn't expecting to hear "Miss Strukely" 'til August. AND OMG AUGUST IS HERE!?! Whaaaa?? Sssshhhhh....let's not talk about it just yet.

In the weeks between ministry trips, I have been trying to be in a routine of prayer- starting my days with Mass and some time in front of the Eucharist, going to Confession regularly. But as many youth ministers know, some of our prayer time turns into thoughts on talks and topics we could be preparing for the teens and that has been a difficulty with me of late, too.

So I was pleasantly challenged (if that's a thing...) when a friend who I always have very good, honest conversations with asked me: "So what brings you joy, Julia?" OOOooo...good question! Being asked to articulate something like that isn't as easy as we think! My friend who was asking me is a family man, so I assumed that he would have an "easy" answer: his children, his wife, done. When I was discerning religious life, I had to ask myself that question often. And I really don't think the answer has changed, though the direction of my vocation has. So I answered:

"My work. My studies. My friendships. My relationship with God. The New Evangelization. Music. Art." You know, the usge ( I still struggle with the proper spelling of "usge", btw...suggestions??)

I have been really excited and always motivated by my work in ministry and everytime I have a meeting with a professor at school I want to run to the library and start on the very next section of that paper (if only that feeling last longer than a few mere hours ;) but what about these things brings me joy? I told him something like:

"I get joy by giving other people tools that will benefit their spiritual lives in some way." And that is what the goal of the New Evangelization is, I believe. Re-educating those of us who grew up in the faith, but gaining new tools and new information to help us learn more about God.

Then he asked about my prayer life and what God has been saying to me lately in prayer. I mentioned that I was struggling with letting my work get in the way of my prayer, but that when I do sit down to listen to Jesus, I am trying to get back to being his "beloved". It was so easy, again, when I was discerning religious life. I'm trying to listen now to how I can be his beloved as a single woman, discerning marriage, working hard as a minister in His Church.

It was so nice to be asked by my friend these challenging questions I am not always asked and like I said, I really treasure that I can have open, honest conversations with him.

So what brings you joy? Is it an easy thing for you to answer? And what is God saying to you in your prayer time (if you are taking prayer time...not judging ;)

Even though I want to say NO to school coming back in a couple of weeks and I often find myself saying NO to just going to prayer and listening, I need to continue to say YES to my personal time with the Lord and searching for what brings me joy. For these questions, I believe, do aide us in our discernment, and help us find that many answers are already right in front of us.

Also, another cool story from the last Workcamp (there are many. I need to get better at articulating the good moments. When people ask me how Workcamp goes, I often just find myself saying "good". Next time, ask me how I got to be Deputy Fire Marshall or how I discovered a new love for Wegmans- maybe I'll be more specific :)

The parish youth group of which I was youth minister for for three years came to the diocesan camp this July. When I was youth minister at the parish, I tried to (though very poorly) run a junior high ministry. Some of the kids I knew through that ministry are now GRADUATING HIGH SCHOOL and were at the camp. They seemed to remember me and it was really cool to share the week with them. Meanwhile, one of the teens who was in my senior high group back in the day is now a YOUTH MINISTER in her own right and brought some of MY current students with her to the camp! IT was a crazy, weird circle of my life, but it was a pretty cool God moment to witness.

Above are some pics from the past couple weeks. The next time I write I will be days away from SCHOOL STARTING again, I'm sure. AHHH! I want to say hell-to-the-no! But I will say yes.

(pictures: two of my students working side by side at Workcamp, some CUA friends at a surprise birthday party, my former roommates and I reunited, and my sister, cousins, and I home in Ohio for my mom's bday)