Lenten Check In- Week 2- Not Being a Slave to Sin

We had a couple feast days in there (hey, St. Patrick. 'sup, St. Joseph) and I used to be VERY disciplined back in the day and totally not buy into the whole 'Feast Day'/'Sunday' excuse for indulging in the things we have given up for Lent. Unfortunately, for some reason with age, I have become lax in this discipline. And so for like 3 days this past week I wasn't too concerned with keeping my Lenten promises. Sigh. 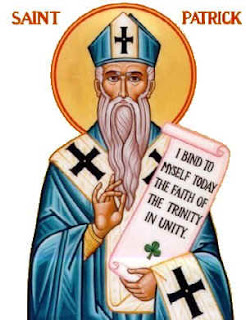 You HAD to be the patron of people who like their drink, didn't you, St. Patrick? I'm not a bit Irish, but I do like an excuse to drink Guinness.

The students are prepping to go to Confession tomorrow and so I was going over the Examination of Conscience with them (which is always a super fun lesson for me. Things inevitably get SO awkward around Commandment #6...especially with freshmen. FUN.)

Amid the jokes and the ridiculous "What If" questions that teeangers LOVE to ask about every possible sin they can think of to entertain their classmates:

(ie- "but what if someone killed like 40 people and then they went and confessed it but they knew they were going to kill more...THEN could the priest break the seal of confession?" You think I'm kidding...)

One of the freshmen girls today raised her hand and said very honestly and vulnerably: "sometimes when I come out of Confession, I am immediately tempted to do the thing I just confessed."

God bless her honest, little soul. How true it is! I immediately commended her for her observation and told the class, "think about it: you are a SAINT once you've said your penance. You've done the right thing! And the devil hates that! He's going to do everything he can to make you want to sin again."

Her comment made me reflect on how I had just gone to confession, was all clean and such, and then let the "off days" of Lent get the best of me.

St. Joseph's Feast day was supposed to be a joyous day for me as I ended my novena. And it was- I got to witness two very holy people get married. A wedding on the feast of St. Joseph! Can't really beat that!

But perhaps I wasn't as focused on Lent and my Lenten promises as I should've been. You know with weddings comes a lot of people you haven't seen in a while and with that (for me) can be the breeding ground for gossip.

So I didn't win round one of Lent as I had wanted (as if it were a competition. I don't know who the round went to if it wasn't me, actually...St. Patrick, perhaps...). Week 2, however, has started convicting me again, it seems. Again, only MONDAY. We'll see if we can get back on track.

I did take some extra time for prayer, however, this weekend and finally finished the part on St. Teresa of Avila in "The Four Teresas" which I had been reading. This passage really convicted me and kind of ties into last week's reflection:

"Thinking of the love Jesus has shown us on the cross helps us to love him in return...If we want to experience a similar conversion in our lives, we can follow her [St Teresa's] advice to always fix our eyes on our crucified Savior. When we do, keeping the commandments becomes easier and easier...."

Truth! Like I said last week- nobody's surprised that when we pray the Stations of the Cross, it's much easier to surrender and give our best to Jesus. HOWEVER, the opposite is also true:

"On the other hand, when we are not seeking a loving relationship with God, we want to be 'free' to act selfishly. Rooting out that selfishness is a necessary first step to loving God."

I know I am seeking a loving relationship with God, but I am also seeking to be selfish at times.

We have these twisted ideas about freedom. Yes- freedom is GOOD. But what we think freedom really looks like can be messed up. I also know I've written about this before, so just bear (or bare? bear. I never get that right) with me.

We think freedom means being able to do whatever we want. And as a single person this temptation, I can tell you, is totally there. But as I found with the whole 'feast day fiasco' sometimes doing whatever we want can really tie us down.

I know I would struggle if some of my freedoms were taken away (convent, anyone? ;) but there is something to be said for the discipline of routine and being accountable to others to an extent. Dependency (versus independence-y?), too, can tie us down. So we just have to be CAREFUL, I guess, no matter our state in life and our gifts, to not let anything (SIN) or anyone limit us.

Last time at women's group, I was reading a passage from True Devotion to Mary that touched upon this topic of slavery. Enslaving people is bad. And so we have this negative connotation of it. But to be a "slave" to Jesus is actually giving our whole selves to Him and it's actually easier because then he can direct us. I know it sounds weird and crazy but this book was talking about the difference about being a slave to Jesus and a servant. A servant just puts in his or her time for a wage and then gets the heck out of there. A slave is indebted to his/her Master and committed to them fully. I was going to put a pic of Britney's "Im a Slave 4 U" video or VMA performance here, but I thought a pic of her baring mid-drift amid this Jesus talk would be a stretch...ah, Britney.

...can't we be indebted to Jesus? I mean, we are kinda already there.

Anyways, I know this concept sounds weird and dated- it jarred me at first too. But I do think my perception of freedom can bring me down sometimes. Sometimes I just wish God gave us instructions! Though, I know that's not how free will works.

Freedom/Independence, of course, also brings me much life. I was thinking about this as I was on retreat with the senior students this past week. If I weren't single, I don't think some of the students would connect with me as they do. They think 30 is old, but when you are married with kids it kind of seals the nail in the coffin (no offense to my married, mommy friends! You know how kids' minds work ;) I think they see me as in the same boat as them to some extent and I think this helps my street cred.

Now as beautiful a gift as this is, I'm fully prepared for when God is ready to start taking away some of these single freedoms :) Well, maybe not fully prepared. I'm getting there.

Ah, freedom. Such a beautiful, but dangerous gift. This is why surrendering to Jesus makes everything easier. Imma work on that this week.

It's better to be a slave for Jesus than a slave for the man; That which bounds us makes us free, but only when it comes to spirituality. Totally loved this post. :)

Good luck with this week!

I was JUST thinking about the whole slave-servant discussion this morning when I was reflecting on today's readings (about being a servant.)