I was driving up to New Jersey on Friday (yet another out-of-town trip! As a friend pointed out to me, I have consumed alcoholic beverages in about 6 of the American states in less than 3 weeks. Record?) for a Housewarming (or Housecooling as the case was!) of a close college friend. I put the ipod on shuffle as I was driving and this song came on and it prompted me to prayer.

I said God, will you bless this decision?
I'm scared, Is my life at stake?
But I see if you gave me a vision
Would I never have reason to use my faith?

A couple weeks ago, I reflected on 'conforming to God's Will' and while God has a plan, He wants us to choose things (even though, we'd rather He just order for us sometimes ;)

The words of this song helped me articulate some of my thoughts of late:

"This is more than I'd hoped for, but sometimes I fear That the choice I was made for will someday appear"

Amen! We LOVE our choices. Our freedom. But sometimes we get overwhelmed by the choices and then we just get stuck or paralyzed by our fear. OR we fail to make commitments because we 'want to keep our options open'.

Having made some pretty important key choices in the past, I've kind of wanted God to take the lead for the while and steer me around. He's made it clear He's not going to do that.

So conforming ourselves to God's will is doing what this song says- moving and making our own choices (with the help of the Holy Spirit) but always holding our decisions "up to the Light" for God's blessing.

Because what the song says is true: "But there's no choice at all if I don't make my move"

We can't just wait around. We have to be actively passive.

So, Imma keep listening to the Holy Spirit, staying close to Mary, and checking in with God as I move. And:

"Trust that the timing is right" then "Hold it up to the Light".

My problem, of course, has been God telling me to stay put for the most part. I have come to realize that waiting is part of the move. Or as this Dirty Projectors (one of my FAV indie bands) says, "Stillness is the Move"

isn't life under the sun just a crazy dream?
isn't life just a mirage of the world before the world?
why am i here and not over there?
where did time begin
where does space end
where do you and i begin?

This song is of course much more existential, but I like that sentiment that Stillness IS a "move". Sometimes THE move we make.

I have been moving and shaking amid my "stillness" lately, as you all know! This weekend was pretty EPIC, I must say. In a kind of ordinary but out-of-the-ordinary way. 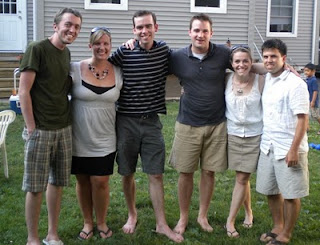 While in NJ, I had the HUGE blessing of drinking a beer (or two ;) with my friend from college who a year ago was diagnosed with leukemia. And here he was with us- now married- and playing bocce ball. Hair grown back, weight gained, jokes being made. Such a blessing and yet another witness of God's faithfulness.

Then I drove back on Sat night to be home in time to play for a Mass Sunday morning and go to not ONE but TWO concerts.

The first was DIVAS! a show my dear friend was in which took us through the ages of great "Divas" in pop culture from Marilyn Monroe to Madonna to Lady Gaga to Judy Garland. Then, I saw another one of my fav indie rock bands, The National. If I could've designed a perfect day/weekend- I'm pretty sure it would've looked like last weekend.

RochelleP_Higginson瓊文 said...
This comment has been removed by a blog administrator.
June 13, 2010 at 1:17 AM