Reflections on an Ordination 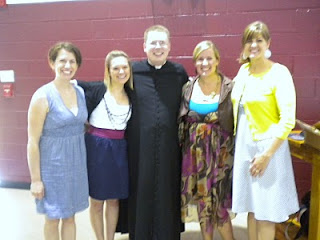 My friends from NET and I 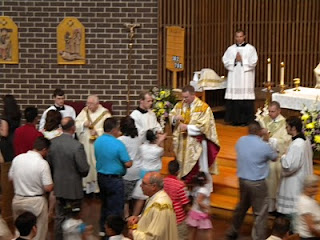 My friend distributing communion to the congregation for the first time as a priest at his Thanksgiving Mass. 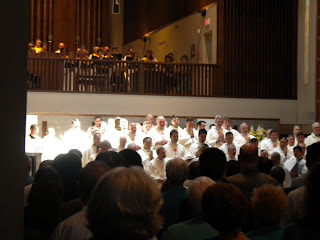 The priests of the diocese blessing the newly ordained at Ordination. 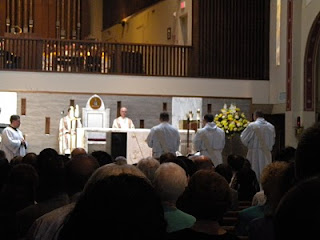 This weekend, one of my friends from the year I did NET was ordained a priest in the Diocese I used to work in! Actually, two out of the three men ordained for the Diocese were NET alum!

I had never been to an ordination before (but now I've witnessed all Seven Sacraments- holler! ;), and of course, me and my newfound nerdiness for liturgy were all giddy at the symbolism and meaning involved in the Sacrament.

First of all, this is not an easy time for priests to get ordained. Not that there's ever an easy time- the priesthood isn't easy! Having worked in a parish, I know it means lots of phone calls, hospital visits, telling people things they don't want to hear, managing and running a 'business' of sorts...when really they just felt a call to give Jesus more.

But even I as I sat there at the cathedral for the Ordination Mass...I questioned. Why are priests so fascinating to our culture? Why do we hear about them doing bad things? Why is the Sacrament of Holy Orders (as well as the Sacrament of Marriage) under attack? (answer- the devil hates when we try to do holy things!!)
Priests also are fascinating because they are so counter cultural, yet still live and are very visible in the culture. Whereas nuns are countercultural, they still kind of get "hidden away"- either by being cloistered, or taking vows of poverty. Diocesan priests very much live in the world. Sometimes this gets the best of them. Or it gets the best of us.

Part of the Sacrament of Holy Orders that I experienced yesterday was watching every priest in the Diocese giving their blessing to the three candidates, and then giving the three candidates a fraternal kiss after the newly ordained were, well...ordained. This made for a lot of going back and forth (it felt like we had 1o,000 priests in our diocese at that time, not gonna lie ;)
It was somewhat easy to see how people might look at all these guys (see above pic) and think it a bit of a boys club. But when you think about it, it's all historical. Christ founded the priesthood "in the line of Melchizedek"- a righteous Jewish priestly figure. The fraternity of the priesthood IS founded on ancient tradition. I know many people say the Church should change 'with the times'- and I don't want to espouse too much on that here- but personally, I think one of the beautiful things about our faith is how far back tradition goes.
I imagined as I was sitting there, watching the bishop anoint my friend's hands with oil, the mystagogical talk St. Cyril or St. Ambrose might have given new priests in the 4th century. I pictured all of us gathering in a cave (or wherever early Christians might have gone ;) and the apostles like Sts. Peter and Paul ordaining new men to "go make of all disciples".

We are ALL called by our baptism to "make of all disciples". We ALL as Catholics receive holy chrism when we are Baptized and at our Confirmation. So we have a role too! But these men are setting themselves apart so that we can have the sacrifice of the Eucharist every day at Mass. So that we can go to Confession, we can get married in the Church, and we can be buried with Christ.

The sacrifice that they make is not always seen or thought about, I think, as a sacrifice. Either priests are humble and we do not see the sacrifices they make, or the opposite- we see the sinful side. But they are still human. Yes, they are called to higher standard for sure, so I'm not trying to excuse anyone in anyway. I'm just trying to emphasize the point that we all are called to many things as Christians and we often fall short.

This example of sacrifice- that the priest becomes 'in persona Christi' and lays his life down, not exactly as Christ did, but in a symbolic sense- really challenged me today as I watched my friend celebrate his first Eucharistic sacrifice.
(Sidebar: So, much like wedding weekends, there are many festivities surrounding a priestly ordination! The Ordination itself yesterday with the whole Diocese at the Cathedral, and then the new priest's "Thanksgiving Mass" which is his first time celebrating the Mass himself for a congregation. And of course, a reception to follow- much like a wedding!)

Watching him perform the sacrifice of the Mass made me think of the sacrifices he has made and will make- 6 years of school, the vow of celibacy, giving himself totally in the service of others, the many parishes he will serve in, marriages he will perform, sins he will forgive, sick he will visit, people he will bury.
And it made me think- how am I called to sacrifice for the Church right now? I am not yet sure of my vocation. I wanted at one time to give of myself through religious life, but that is not what God is calling me to. So how are we each called to sacrifice for Him as lay people?
The cool thing about having priests as friends is they can give you cool blessings, say Mass for you, and hear your confession whenever you want ;) My friend gave me a beautiful blessing today at the reception. He knows of my struggles with vocation and he brought that into his blessing and I was really touched.
It is a beautiful thing for us to all be praying for each other- consecrated and laity, saints and sinners alike!
The readings for today were not necessarily perfect for an Ordination- adultery, sin, and forgiveness were the themes! But regarding the hurt in our Church right now, it did call to mind all of our sinfulness and all of our need for forgiveness.
Because I am also a music minister, I had to play for an evening Mass this weekend too (yes, I went to three Masses this weekend! Such is the life of a music minister) and the priest at my regular parish Mass brought the idea of community into his homily. Because the Gospel was the woman anointing Christ's feet with oil- she was in front of Christ's friends, in front of people who ridiculed her and did not understand her action-in the midst of community. She was in need of Christ's forgiveness, but also she needed to forgive those mocking her. We all need this witness of pouring out ourselves for Christ, that the woman does with her gesture, in our communities. And we also all need to be forgiven.
Actually, the Church where I played for that evening Mass just had a priest removed because of accusations. Amazing how in one weekend I was celebrating with a new holy priest, and also mourning with a hurt congregation.
The realities of our Church. The realities of our humanness. All the more reason we need the hope of Christ in our priests and one another.
I am excited for my friend- he was sooo happy! And I have another friend who was actually on my NET team getting ordained next month! God is moving...the Holy Spirit is moving...it is awesome to witness ;)
Peace,
Julia
Posted by Julia at 5:25 PM

A wonderful reflection! I've only been to one ordination, but it was such a great experience.