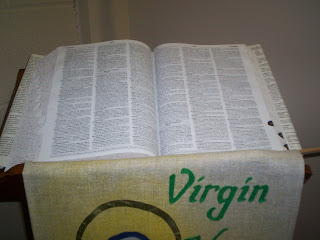 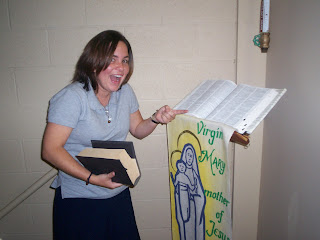 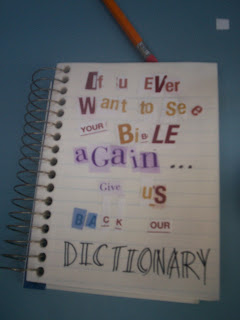 So, this is how we amuse ourselves in the convent ;) We get really tired after a long day in the Book Center, a day of study, of chores, of prayer, of community...and then we play stupid tricks on the other sisters. Our superiors, mind you ;)
Our formator, actually, was away this past week. And while the formator is away, the postulants will play ;)
It all started after our lectio prayer one night. We were discussing how in chapel we have a Bible and we like to change the pages from time to time to display different passages. I mentioned that the Bible that we have at the top of the staircase hasn't changed since we entered. Both Alina and Emily were like, "what Bible? I never noticed what passage? etc..."
We were pretty convinced our older sisters and superior never noticed either. We were so convinced that we thought it would be funny to put a dictionary where the bible normally is at the top of the stairs and see how long it took for someone to notice.
We placed our bets. I was betting no one would notice, and if anyone did, it would be our superior. Some said one of the older sisters....
We waited a whole 24 hours in suspense with no comment about the Dictionary. My favorite moments of the day were when I would encounter a sister at the top of the stairs, right in front of the dictionary, with no response or reaction.
That is because, we found, our dear sisters (well, one of them at least) likes to play and is a little sneaky herself.
The next day, without any words, our dictionary was gone. I thought we should fess up, in fear that the sisters didn't think it was funny, but rather disrespectful and that's why they weren't commenting. Alina knew better though...she said, "oh no, they are playing with us.."
And, so...we retaliated. Hence the ransom note (pic. 3)
The note sat on the dictionary for another 24 hours or so. Even my friend who had come by the house wondered, "what's with the stickers on the Bible?" Clearly, our note was seen, the sisters were choosing, however, to remain sneaky and silent in their response.
Finally, the next morning after Mass, our dictionary sat at our breakfast table. Still no words had been uttered. This had become quite a game!
Every morning, we tell a joke from a list that a Sister in Boston sends us. She says, "a joke a day keeps the devil away!" and so we were sharing that breakfast as usual. The joke of the day was,
"When does Thursday come before Wednesday?"
The answer?
In the dictionary.
We watched for reactions. I thought I saw Sr. Jerome make an eye, a smirk....
Later on that day it came out that she had indeed been playing along and had switched the dictionary.
Anyways, that was practical joke #1...many to follow ;) I just thought I would share our joy and amusement in the community :) Nuns can have fun ;)
Peace,
Julia
Posted by Julia at 11:50 AM