2020 has been about many things and many of those things have been dark and serious. I don't want to make light OF the darkness that we have had to face and are still facing, but during this time of Advent, we are to start thinking of light IN the darkness; to think about some of the more positive things in our lives and wait with joyful and grateful hearts. This can certainly be difficult in this time. I am currently re-reading Pope Francis' "Evangelii Gaudium"  which he wrote back when he began his papacy in 2013. To read it now in this darkness of 2020 is a little jarring, but also a good reminder that darkness will not last forever. 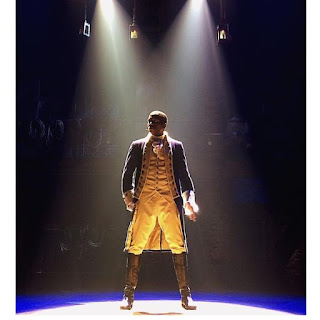 To jump to something much more trivial but still joyful for me, Hamilton appearing on Disney Plus was one of the brighter lights this year. I had been familiar with and listened to the soundtrack, but had never seen the production. Since it has aired in July of this year, I've probably watched it at least thirty times and I'm not exaggerating. Not having many places to go this year certainly has contributed to the amount of times I have watched it, plus, we do have to find joy in the smallest things these days.
I was recently trying to name my top five songs from the show and the song "Wait for It" is on that list. It's a song where we get a glimpse into the differences between Hamilton and his friend-turned-enemy, Aaron Burr. While Hamilton is "young, scrappy and hungry" (to quote the song "My Shot") and works "Non-Stop" (the song that ends Act One), Burr sings that he is willing to wait for the things that are to come to him.
I have always found myself somewhere in the middle of these methods of achievement. I certainly am like Hamilton in his go-getter spirit. If there is something that I want, I will work to obtain that thing as quickly as I can. However, in life, we know that don't get everything that we want. So there are naturally somethings that we have to wait for.
Advent, as we know, is a time of waiting. And I don't know about you, but usually Advent sneaks up on me and then is over before I even realize it. This year, because of the pandemic, hopefully our preparation for Christmas isn't filled with as much busy-ness. We are hopefully avoiding stores, avoiding gatherings, which means less hustle and bustle. I know that I already feel like my first week of Advent has been much more focused and centered than in the past, and therefore more felt.
It helps that- to borrow a line from Burr- we are "lying in wait". We have been waiting all year for a vaccine and for our lives to return to what they were before March. We are waiting for a time when we can gather and see friends and relatives as we once did. Maybe we've even gotten a little better at waiting? I have never been a patient person. Ever. However, throughout my life, I have gotten a little better at making the most of the times that I've had to wait for something. I've gotten better at shifting focus and being grateful for the things that I have instead of the things that I am still waiting for.
I think that this time of 2020 has been just that. Hopefully, we are looking at the things that we are grateful for instead of the things that we don't have right now. Where Aaron Burr is certainly painted in a light that makes him look foolish for waiting in the show of Hamilton, I empathize with him. As Ecclesiastes says, there is a time for everything. And right now is the time to wait- both liturgically and literally- as we wait for a vaccine.
So how are we going to use this time of waiting? I've decided for Advent to not look at my phone first thing in the morning and "wait" to use social media until after I've prayed. It's been a little challenging, but ultimately I've done it successfully and it's been productive. I've been using some prayer devotionals that use Scripture and poetry to remind me of times where God has made things new.
We are in a new liturgical year since Advent has begun. Things may not feel very new right now since we've been in this holding pattern since March. It's been a nice reminder to read from Scripture that God's people have had to wait throughout Salvation History, but God has always been faithful when it was time for something new to begin. For example: Noah and the new life after the Flood, the Israelites and the new life in the Promised Land after 40 years in the wilderness, Simeon in the scene of the presentation where his eyes have "finally seen the salvation" of the Messiah in Jesus, just to name a few. The whole of Salvation History is waiting- from the beginning of the creation stories until we meet our God and hopefully remain with Him in heaven.
However we are preparing for Christmas this year, I hope that we are relying on gratitude and God's faithfulness to get us through. He always provides in His time, we just have to "Wait For It".
Happy Advent!
Peace,
Julia
Posted by Julia at 8:36 AM