A Voice Crying Out in the Desert- Advent Week 2

The first Sunday and week of Advent came and went. I had high hopes as I do every year that I will enter into Advent with great gusto and devotion, but this year, my excuse is that I was overcome by the post-Thanksgiving plague. I was out of commission and could do almost nothing else but move from my bed, to school, to couch, to bed again.

I did take one hour or so, however, to visit with a friend who was passing through town this week. I almost didn't because I was so congested that I didn't think I would be good company. I'm so glad that we did make the time, however. This is a friend that 10 years ago, we both had made major life changes and started teaching. We both were unsure of what our futures would bring. We found ourselves kind of in similar states again, but even amidst the suffering and uncertainty (my suffering was just physical as I couldn't breathe; theirs, a much deeper and holy suffering). However, both of us once again were discussing faith and how in the times of loneliness, it is the one thing that gets us through.

The homily I heard today for the 2nd Sunday of Advent echoed this point that my friend and I were discussing early this week. The Gospel for the 2nd Sunday features John the Baptist, wandering in the desert, preparing all who would listen, to receive the Messiah. John the Baptist is such a great character. He fits the bill of crazy prophet complete with his camel hair attire and diet plan of locusts. His love for Jesus is so strong, though. He obviously knows Him on a more intimate level since they are cousins, yet, John reveres Christ so deeply he announces that he is not even worthy to touch His sandals.

I loved the homily because the priest connected John the Baptist and his wandering with the Old Testament. And you know your girl is a Scripture nerd. Even though I teach and study Scripture, I didn't realize that from the prophet Malachi- the last prophet in the Old Testament- to John the Baptist that there hadn't been a recorded prophet for 400 years. I guess I consciously knew it, but certainly had never connected it to the fact that the Israelites were also in Egypt for the same amount of time. In both scenarios, the Israelites were left waiting for news of a Savior. They would eventually get their savior in Egypt with Moses and then again with John's foretelling, but both ultimately pointing towards Jesus.

When Joshua in the Old Testament brings the Israelites into the Promised Land after wandering for 40 years in the wilderness (the number 40 always represents a time of suffering in Scripture), he brings them to the Jordan and eventually into Jericho. When we meet John the Baptist in the New Testament, guess where he is preaching? At the Jordan, outside of Jericho. When Jesus starts his official ministry at age 30, guess where he does it? Yup. He is baptized in the Jordan and then goes up into a mountain outside of Jericho for 40 days and 40 nights.

You can think that these things are coincidences or that the authors of Scripture were just really, really good at analyzing all of this symbolic literature. I choose to look at it through the lens of faith. How beautiful to have these parallels line of so completely. How perfect to see how Christ completes the stories and promises made centuries before.

When Father was sharing about the Jordan and the desert outside of Jericho, I had the benefit of being able to picture it this year. One of the couples who went with my group on the trip were also at Mass and we immediately rejoiced in being able to recall images of these places as Father spoke today: 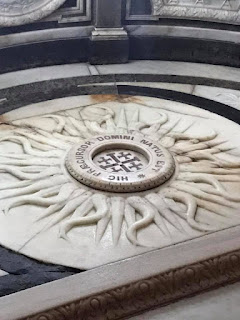 The place of St. John the Baptist's birth (above) somewhere in Judah 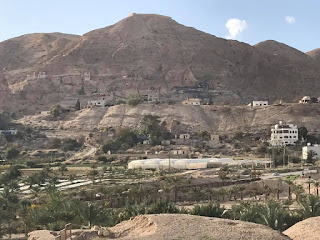 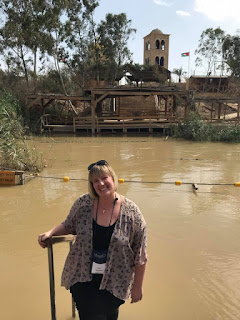 What does John the Baptist and Joshua and Jericho all have to do with my friend and my conversation this week? And why are the Jordan and Jericho such special spots? Well, the wilderness was not a fun place for the Israelites, nor John the Baptist nor Jesus. The desert brought doubt, temptation, and isolation. However, it was in the wilderness and in the desert that these people heard God. They needed to be in isolation and in this period of waiting in order to speak and grow closer to God.And Jericho is recorded as one of the oldest cities in human history, period. It is not only a city of great religious significance, but anthropological and scientific significance as well. Coincidence?

This time of Advent is know as a period of waiting. We have the benefit of knowing that our Savior has already arrived and set us free. But there are still periods where we may not "feel" God's presence. Yet, it is in these desert moments in the wilderness that He is preparing us for something and we can grow closer to Him and hear His voice if we listen.