It's All About Balance

The year is 2005. The social media platform is MySpace. The profile bio asks you to feature a quote.
I agonize. WHAT QUOTE WILL PROPERLY SATISFY AND SUMMARIZE MYSELF IN THIS NEW SOCIAL MEDIA WORLD?!?

I come up with this: "It's All About Balance."

People other than my "top 5" probably wonder: "What? What does that mean?" And that would be fair. I was 24 and fancying myself introspective, but wanted to keep it light and fun? I guess?

I'm still not sure all that the MySpace bio quote meant to me then, but I did find myself for the rest of my 20s and 30s trying to seek a medium between extremes: wanting to be faithful to the Church, but also wanting to live "in the world." I think that over my past 15 years or so, I have achieved, for the most part, that balance. Though I have certainly lived that balance out more gracefully at times in my life than others.

I find myself thinking about this MySpace phrase due to another social media encounter that I had today with my cousin via Twitter. Being the good Polish-Catholics that we are, my cousin and I found ourselves after Mass tweeting about today's Gospel. Who does that? We do, apparently! I will admit, when I first read the Gospel for today, I wasn't thrilled. I was having to break this Gospel down at our RCIA meeting last week as well as for my students. What was I going to say about a woman being married 7 times (though 7 is a symbolic number in Scripture...) And the Sadducees? And Moses? And what, in fact, is Jesus trying to teach us??? Here is the passage:

"Some Sadducees, those who deny that there is a resurrection,came forward and put this question to Jesus, saying,"Teacher, Moses wrote for us,If someone's brother dies leaving a wife but no child,his brother must take the wifeand raise up descendants for his brother.Now there were seven brothers;the first married a woman but died childless.Then the second and the third married her,and likewise all the seven died childless.Finally the woman also died.Now at the resurrection whose wife will that woman be?For all seven had been married to her."Jesus said to them,"The children of this age marry and remarry;but those who are deemed worthy to attain to the coming ageand to the resurrection of the deadneither marry nor are given in marriage.They can no longer die,for they are like angels;and they are the children of Godbecause they are the ones who will rise.That the dead will riseeven Moses made known in the passage about the bush,when he called out 'Lord, 'the God of Abraham, the God of Isaac, and the God of Jacob;and he is not God of the dead, but of the living,for to him all are alive."- Luke 20: 27-38

My cousin, in her tweet, wanted to know why we had to focus on the next life while we are still living and breathing here in this one. My response to her was taken from that MySpace profile: "It's All About Balance."

We have to focus on heaven because it is our hope. It is our goal. I am an extremely goal oriented person and so to me, if there isn't a goal, what is the point? But I saw my cousin's point as well. We can't go around with our head in the clouds without living in the here and now. I used to think that saints were so detached from this earth that I couldn't possibly relate to them. I have come to (as you well know, dear reader) love the saints because they are living, earthly examples of how to live heaven on earth. 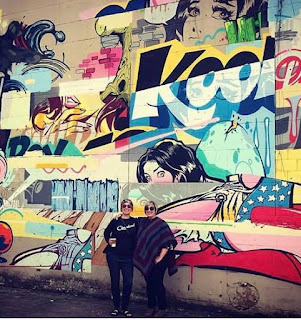 Here's a picture of my cousin and I from when she came to visit me in RVA earlier this year. A lot of my friends down here said we look alike. I'm definitely 8-9 years her senior!

Even before my cousin had tweeted me, however, I was thinking about this idea of balance on my way to Mass. Mostly because I was thinking about work and how my students more so than ever before really are quite detached from the Church. It's not their fault- they are 11 and 12, after all. And it's not that they don't have a desire, they just haven't been exposed to the Bible as I had been growing up,  nor the traditions of the Church. Even going to Mass is not a priority in their world.

I was thinking about how we address this separation from Scripture and Tradition and it has to be with kindness and with balance. To instill fear was a tactic from the past and fear is one way to hold power for sure, but it isn't the healthy way. Christ never went for fear tactics. Now His message was not always easy, but it was that balance of observing the law and revering God, but having compassion and meeting people where they were at.

I am constantly challenged to meet people where they are at. I like to think I do a good job most of the time, but there are times in my classroom or in my relationships where I may try to instill fear instead. We are finishing up our unit on Moses and the 10 Commandments and it is really such an important story today. Moses was tasked with an incredible role- to free people from slavery and then lead them through the wilderness to a new life. He did not do it perfectly. At times he got angry. And when he disobeyed God, he was punished. My students always feel bad for Moses for not being able to enter the Promised Land, and perhaps it is harsh. But we can't know what goes on in the hearts of others. I think we try to, but it is only God who can see our hearts. And there is something to be said for discipline and consequences, but they are only effective if also met with care and love.

I was thinking too, today, that God always reveals Himself with Light. As I've mentioned, winter is hard for me. The nights come quicker and the temperatures drop and though I am an introvert, I don't like to be relegated to the indoors for long. The sunlight is necessary. It gets me out of my funks.

Similarly, God spoke to Moses through light in the Burning Bush. Moses had been exiled, and the Lord brought Him back through Light. We recognize God's presence with candles in the Church and in the Sacraments. Even non-believers have celebrated the presence of the sun, moon, and stars and their times of light. But even then, it is about balance, right? You can't have the star or moonlight without the darkness.

I have been praying this week that I may harness Christ's light so that I do not delve to deep into winter's blues and that I might be able to share some light with others, especially in this time where the dark comes sooner.  Again there is that balance to be had: we need the dark to appreciate the light.

The light of heaven and the light of God's presence can be experienced here on earth, but we also look forward to it in the next life. As the end of the liturgical year approaches, we look toward what is next in the here and now but also beyond.