It's that time of year again: summer! Travel! And time to start the novena to St. Paul!

Y'all know about my love for St. Paul. It started when I discerned religious life and essentially started this blog over 10 years ago (WHAT?!). Learning about Paul and really praying with him that year, taught me a lot about him as a saint, a person, an evangelist, and also a lot about myself. I identify a lot with Paul. He was not perfect. He knew that and documents his weaknesses well in his letters. But he was passionate and sincere and even while in prison, the one thing that he wanted more than anything was for people to learn about Jesus and the new Church.

He was not into Christianity in the beginning- far from it. He reviled and even sought to kill Christians. It is said that he was at the first martyr- St. Stephen's- stoning. But then he has this intimate encounter with Christ and is completely changed. He is an example of Christ's love and forgiveness and how that can change us if we allow it as Paul did.

So over 10 years ago, I start to pray and discover more about this man Paul. He has two feast days that are recognized in the Church. One is in January and commemorates his conversion experience with Christ. The second is the feast that is coming up and that he shares with another pretty important apostle, St. Peter.

(Side note- a lot of people get confused about Paul being called an "apostle." He was not one of the 12 called initially by Jesus. His conversion and encounter with Jesus is unique in that he is called by Christ after Christ is ascended into heaven! He is considered an apostle because he was personally called by Jesus and was fundamental in establishing the early Church as Peter was. In fact, after his "Jesus moment", Paul meets with Peter in Antioch where the followers of Jesus first call themselves Christians. Then, he and Peter split up and essentially start founding the Church!)

While I also have deep feels when January rolls around and we honor the feast of St. Paul's conversion, I have had amazing experiences in praying this novena leading up to this June 29th feast as well. 11 years ago on this feast, I received a call that momentarily changed my life. I was accepted into religious life and given my entrance date. Everything I had discerned and applied for the year and a half prior, was coming to fruition and a new journey was beginning.

I struggled that year, and y'all know the rest of the story. After living in the convent for a little less than a year, I decided that religious life was not for me. But had it not been for that experience, I wouldn't have discovered my love for academics and Scripture, nor my love for St. Paul.

Flash forward a few years, and another feast of Sts. Peter and Paul really stands out to me. I had now been teaching for about 3 years and my teacher friend and I had discovered our ability to travel well together. We planned a road trip throughout Eastern Europe that was amazing for so many reasons. I had an off and on relationship leading up to this trip that I was trying to make sense of. I decided to pray this novena (which starts today! If this link doesn't work, someone let me know!)  and low and behold, on June 29 (the actual feast day), my teacher friend and I were in Prague. We had signed up for a beer tasting and walking tour of the city. We gathered in the rain that day to meet our tour guide and guess who we met? Our tour guide named Paul! 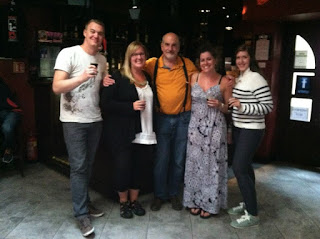 My friend and I with Paul as well as a lovely couple that we met and still keep in touch with from Norway!

I took meeting Paul as a sign that St. Paul had heard my novena prayers. And I do believe that I got an answer to my petitions. It may not have been the answer I wanted, but that is how novenas work sometimes.

After that year, I made praying the novena to St. Paul leading up to this June 29th feast an annual thing. The following year, my same teacher friend and I were in Italy (this is what teachers do in the summer!) and I had just discerned taking a new job and moving to Richmond. I believe that St. Francis had a little to do with all of that as we were in Assisi when all of that was going down, but on June 29th my friend and I were in Rome and we had an awesome day which included visiting the Catacombs and exploring the city. 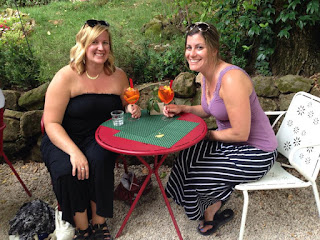 Feast of Sts. Peter and Paul in Rome 2015! Having a spritz in a Roman garden to celebrate new job and our awesome travels! Also, Rome is where St. Paul was martyred!

2016 was a weird year for many reasons. Our country was in a tumultuous election cycle, my friend's dad was very sick, other friends were suffering from breakdowns and breakups, and I was working two jobs and feeling the stress of that. I was actually in Richmond for Sts. Peter and Paul that year, as my Australia trip was scheduled mid-July (you knew I had to get a summer trip in their somewhere!). So I wasn't anywhere glamorous for the feast that year, but I did manage to write this post.

Last year, things were back on track with my travel bestie and we planned a trip this time to Spain, Morocco, and Portugal. By now, she had traveled a couple years with me during this novena time, and she knew that June 29 was an important day for me. We were in Lisbon, Portugal for the feast and we  made it a point to find a church and pay our respects to my boy, St. Paul, that day. 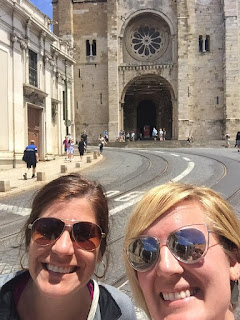 Here is our selfie in front of the Cathedral in Lisbon- St. Anthony's.

And that brings us to the present. I will once again be traveling, but with some different friends, and we will be staying stateside with our travels. I once again have many intentions that I am bringing to St. Paul during this novena this year. I have my own personal intentions that I continue to bring to my friend, Paul, but this year, I also place our country and particularly the children at our borders in Paul's hands.

My friends and I leave for Santa Fe, NM tomorrow where we will be for a couple of days. We will then rent a car and drive to the Grand Canyon and will end up in Southern California. On June 29th this year, I will be in Joshua Tree and most likely checking out this glorious location (as seen in the Kesha video, "Praying"). 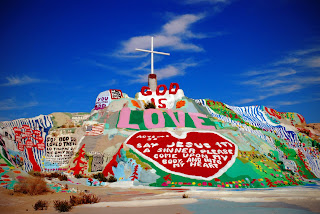 While my friends and I put together all of the places we wanted to go on this trip, I didn't realize that this location would fall on my favorite feast day. I know that God and St. Paul have a pretty awesome plan for us. And I pray that our intentions for our country and our borders will be heard.