The Resurrection and the Life

This Sunday's Gospel for the 5th Sunday of Lent is one that has had a lot of meaning for me throughout the years. When I was first really delving into my relationship with God in my late teens, early 20s, this Scripture was a message to me of God's personal love for me. And those moments of real, true personal love and relationship are so crucial when forming a relationship with anyone, but especially God.

This past Sunday's Gosepl was John 11:1-45 or the raising of Lazarus. As I mentioned, when I was first getting to know God and myself, I focused mainly on the emotion expressed by Jesus in this passage. This gospel contains one of the shortests phrases in Scripture: "and Jesus wept." It should come as no surprise that as a teen or woman in my early 20s that Christ's display of emotion was the focus for me because that seems to be what women in our teens and early 20s DO: we emote. I heard a homily on this passage at age 20 or 21 in which the priest encouraged us to imagine Christ weeping for us like he did Lazarus because he loves us just as much as his friend. Again, for an early 20 something, this emotional connection helped make Christ much more real to me. I liked the idea of Jesus having human emotions because that made God more tangible in my eyes. And the idea that He cared for me the same way as he did a close friend that He personally knew while on earth, well, that idea also kind of blew my mind at the time. 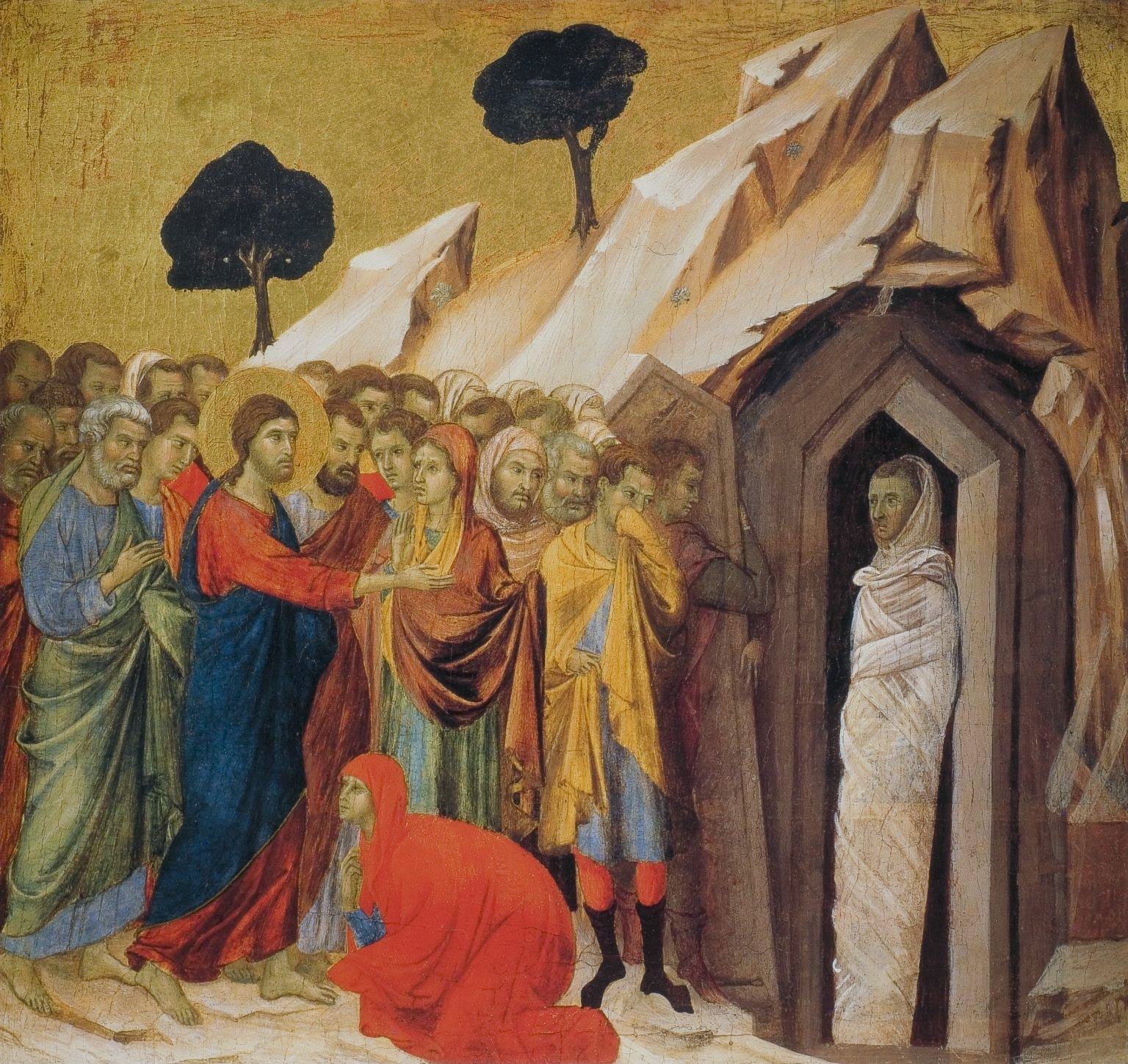 A few years later as I was struggling in the convent, the idea of "coming out of the tomb" like Lazarus struck me. I felt like I had been "buried" and needed to come back to  life. Even the sister that was my formator agreed that a vocation wasn't meant to feel like I had died, but rather, a vocation was supposed to bring us to life! I contemplated that as I contemplated this gospel once again. I didn't like who I was at that place and time. I thought I had a "stench" to take an image straight from the Gospel (Martha is afraid to roll the stone away like Jesus asks because she knows her brother has been dead for four days and this is the desert, right?) The stench of death was something that she feared and was going to keep her from allowing Jesus to do His miracle. I, too, was afraid of what might happen if I came back out of the convent, back to "life", but ultimately, I trusted God just as I had when I went in the convent, and I have definitely been given new life.

So much so that when I hear this gospel today, I just get excited about the Resurrection. Easter is almost here! And this miracle clearly foreshadows the amazing thing that Christ will do Himself in just another week or two. All of the readings this Lent have been so great. As the priest who gave the homily at Mass today said, we have gotten to journey with Christ and be taught in different "classrooms." Lent began with the "classroom" of the desert where He was tempted for 40 days. Then we were taken to the "classroom" of Mt. Tabor and got to see our Lord transfigured. Then we heard of the woman at the well and the cleansing of the blind man- two stories of purification and cleansing. And now, the week before Holy Week, we close out Lent with this very special Gospel of Resurrection and new life.

What struck me today is the transformation of Martha. I've always been able to relate to Martha, particularly the story for which she is most well known: she works, while her sister sits at Christ's feet. Today, though, Christ encounters Martha while Mary stays home. She gets to have the special encounter with Christ. Which shows me that Martha has learned something. She has changed her priorities. She has changed her ways.

The concept of time in this story also struck me as important today. The priest at Mass today also pointed out that he often questioned, as we perhaps have, "why does Jesus remain for two days when he hears his friend is sick?" Why not go right away to see Lazarus? Jesus addresses this later before he raises Lazarus and says: "Father, I thank you for hearing me. I know you always hear me, but because of the crowd I have said this." He had to wait for two days so that this miracle would be even bigger. Bigger than just healing a sick person as he had done before. He waits so that He can bring the dead back to life and have an even bigger miracle so that we might see and believe.

These two messages of Martha's transformation and the necessity of Jesus' waiting hit home to me today and it is amazing that one Gospel passage can come to life (no pun intended ;) in so many different ways at the very right times for me. I can identify with Martha's progress. I have also come to know and to believe in Jesus since 10 years ago, 5 years ago...but those moments helped in my transformation. Also, I love the message that Jesus waits, which doesn't make sense, but allows an even bigger miracle to happen so that we might believe.

I am praying and trusting in the waiting. I often ask Jesus: "why are You waiting? Had you only come sooner, this that or the other may have happened!" But today I realized it is so that myself and others may see the good work He does and will do because of the waiting.

Lord, I have come to know and believe that You are the Resurrection and the Life. I can't wait until Easter!

Hope you all have a blessed 5th week of Lent as we prepare for the Holiest of Weeks!