The Year of Faith Revisited

As I was praying after Mass yesterday, I reflected on the readings for Year C of this feast and I also thought about how I had lived this "Year of Faith." As I already mentioned, the Year of Faith began in Oct. 2012, when Benedict XVI  was still our pope. As the YOF comes to a close, we have a new Holy Father, Pope Francis. And this significant change I think definitely plays a huge role in this YOF for the Church. Pope Benedict XVI was (and still is!) a great theologian. I remember having to read one of his works for grad school and I also (because I am a nerd) read many of his works for fun, too. He was (and is!) great with the written word. But I think something we see now with Pope Francis (the first to take on that name) is a pope of word and action. Granted, Benedict was not able to move and act as much as he would have liked, which is why he stepped down. But our current Holy Father is drawing many people back to the faith because of his actions, which is a great way to close out this year of faith. Benedict XVI "opened the Door of Faith" and Pope Francis is leading people in. It's so cool to reflect on how that worked! 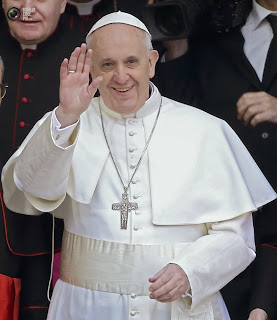 And then I thought how I personally have lived this YOF, and admittedly, it is not as much as I would have liked. I started off strong, reading the document Benedict released, blogging about it, sharing the information and letter with my students. I began the New Year also talking about this theological virtue of Faith. But then it seemed that my faith was more tested than anything else in this year of faith. Since graduation and moving in May, I have had to struggle and rediscover my vocation and purpose since I no longer had a goal to strive toward and I have extra time (and space!) on my hands. This summer was certainly a struggle for me, working instead of traveling and jetsetting like I had the year before. 2012 had been such an exciting year with all of my weddings and travels, and 2013 has been a year of tests- literally and figuratively.

But reflecting now, isn't that what faith is? A series of joys and tests? Belief in things unseen? This year in particularly I certainly have had to have faith. Faith that I could get through my tests and believe that good will come from them. Faith is not always the sunshine and rainbows that come with joy and feeling close to God. Faith is also persevering when God does not feel so close. Our forefathers and foremothers have certainly shown that throughout Salvation History.

The readings for the Feast of Christ the King are really interesting in Year C. For those of you unfamiliar, I think I've mentioned this before, but our Sunday readings are on a three year cycle so that we don't hear the same readings year after year and we get to read more of the Bible. The Gospel for this Feast in year C is the passage of Jesus dying on the cross and speaking to the two criminals beside Him. One yells at Jesus and tells Him that if "He is the Son of God to save Himself and them" and the other says "Jesus, remember me when you come into Your Kingdom." 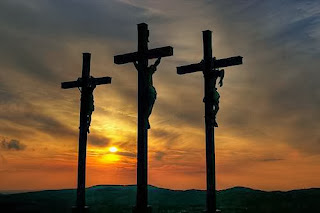 This is not the reading that comes to mind when I think of Jesus as a King. I think of His many parables about what the Kingdom of heaven will be like or something from the Ascension with the Son of God rising on a cloud to take His Throne. But this year's Gospel gives us the kind of King Jesus truly was and is: a king who is merciful, humble, broken for our sins. One who is like us in every way BUT sin. The Son of God who took on flesh to save us.

I use this story of the two criminals and Jesus to teach my lesson on judgment to my sophomores. Here are two men on their death bed. One continues to jeer and mock Jesus even to his death, needing proof of His divinity, and the other believes with a sorrowful, repentant faith.

Which are we more like right now? Do we still need Jesus to prove Himself to us? Or are we willing to believe, even if we are suffering?

I know this year I have needed much proof from God of His work in my life. But as we come to the end of this liturgical year and year of Faith, I like to think that I am going out the "Door of Faith" stronger and ready to release control.

Then he said,
"Jesus, remember me when you come into your kingdom."
He replied to him,
"Amen, I say to you,
today you will be with me in Paradise." - Luke 23:43

I met with my spiritual director to try to come up with ideas for Advent. I am really excited and looking forward to it. Advent is usually seen as a time of waiting. I am certainly in a time of waiting right now as I wait for what my next adventure will be. But my SD and I decided to focus more on the present moment and living Advent as it comes each day very presently for its own sake, so I am excited to give this active, present waiting a try.

I'm also soooooooooo looking forward to this Thanksgiving break! As you can tell, November has been a very reflective month for me and I am very grateful for it!

May you all have blessed Thanksgiving and blessed end of the liturgical year!
Peace,
Julia
Posted by Julia at 1:14 PM