This fall it seems I'm having very many thoughts and experiences similar to that of fall three years ago- the fall of 2010. I became an aunt for the first time that year and I was working very hard as a first year teacher. I also got to harvest grapes for the first time at the family vineyard of some friends. There were also what I thought to be some promising dating opportunities at the time, and there was just an overall attitude of newness and hope after a pretty trying first half of the year.

Three years later (is it coincidence that our lectionary of readings is also on a three year cycle? That I would have heard the same gospels and letters three years ago in Year C, the same lectionary year as today?) my sister is one month away from giving birth for the second time, I'm still working hard as a teacher, and I recently got to harvest at the same family farm as I did in 2010. 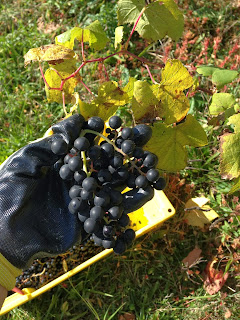 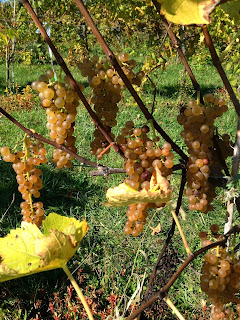 This year, though, because it is 3-4 years later, there were SO MANY new grapes for us to harvest! Many different varieties than the grapes we had harvested before. And once again, the biblical analogy of the vineyard was not wasted on me. In fact, it probably had even more impact this time around since I was seeing even more fruits of years of labor.

As I was helping with the harvest this year, I meditated on how it truly takes so much time for wine to be produced. Christ certainly knew this and no doubt used it as His analogy for faith for this reason. Grapes take years to grow. The ones we were harvesting this fall in 2013 I believe had been planted in 2009. Four years to grow to the point where they were now ready to be picked. And that is still just the beginning stage of winemaking! Then there is time to ferment: 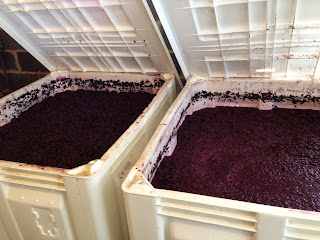 These were grapes that my friends picked earlier in the week. They have to ferment and be "punched down" for weeks, I believe before they move to the next stages...

The processing stages don't take AS long, I believe, as the growing of the grapes, but we still know that wine "gets better with age" so the longer in the bottle, the better!

Again, no wonder that Christ used this analogy for faith. Grapes take YEARS to grow. So does our faith. The growing is the longest part of the process (to my knowledge). This gave me much to meditate on since it seems Christ keeps sending me this message to WAIT (see most of my previous blog posts, including my last one before this).

The processing usually doesn't take as long, (again in my limited knowledge of winemaking) though it is still very much WORK. I have found this to be true in my faith life as well. Once i know what I'm doing or what needs to be "processed", God makes it happen. Like when I entered religious life, or went to grad school, those events still took time and effort- but they moved along a little quicker than the waiting/"growing".

Speaking of religious life, the order I had entered- I still remain in contact with and I am so grateful for that relationship and connection. The sisters began a novena last weekend and I reached out to a couple of the sisters I am close with and gave them my intention for new discernment. With grad school done now, I have spent the past couple of months just working and WAITING. I don't know what the next chapter is for me and I'm just working at school and spending the rest of my time just waiting for God to reveal what He wants me to do in addition to that.

The sisters were very sweet and sent me some words of inspiration which I thought I'd share because I used them to meditate on today:

"May He give you light, but also courage, as he helps you see the unfolding of this next chapter... Perhaps not having any project lined up will leave you freer (but perhaps feeling uncomfortable) so that you may receive what he is unfolding..."

"Live the uncertainty as an invitation Jesus gives to trust more deeply... the present moment is a grace for those times..."

"Keep loving Jesus in the present moment...and He will love you into the next chapter."

You can see that I had expressed some concern as to what to do in this present time because, unlike the fall of 2010, these experiences- while all great- are not really "new" this time around. I'm of course struggling with that theme of late (again, see last post!). I always want something NEW- a new project, a new chapter. It seems others are moving on and I'm still left on the vine to grow or that I have been left in the bottle a little longer.

But God's great plan has also not been wasted on me. While I was working (literally, not spiritually!) in the vineyard last weekend, I discovered that one of the winemakers married a friend of one of my old coworkers. A coworker from my job that I had right before I started teaching. This coworker was actually the reason I found my current job in the first place and it was just such a fitting reminder of how perfect God's plan is. I had really struggled in that previous job and it seemed to take forever to find the next, new fit for me. But when it was the right job, God made it happen and placed people in my life to make it happen. And I'm still very content in my current state three years later.

And so I will continue working and waiting in this uncertainty and perhaps looking at it as an opportunity in and of itself to grow. I did blog about and pray for vulnerability a while ago, didn't I? Sigh. I probably brought this all on myself!

Also, I knew there was a reason I feel such a strong affinity for wine :)

Julia, I had not checked blogger in a while and am touched to be mentioned in this entry. I'm glad that there are these full circles in our lives. Your blog is always honest and lovely. There is comfort in the connections you make between daily life and the liturgy.

Waiting has been a theme for my life as well - I think I wrote about it in an article we worked on together once. If you're interested, I went on retreat that I called my "waiting retreat" and wrote about it on my (very neglected) blog. The entry is here: http://www.mollyohio.blogspot.com/2009/06/reflections-from-retreat-summer-2008.html