My co-worker and friend who led our recent trip to Greece commented on my photos on Facebook: "did you post these the second you got home?" Answer: yes. I also have already unpacked and done laundry! This is just how I do. I get things DONE. Plus, it helps me to process things right away rather than put off 'til later.

So here is the obligatory blog post...not but 2 days after my return! You're welcome.

Two of my colleagues and I (who are also young teachers, btw... Together we covered the areas of English, History, and Religion- all important subjects that could be incorporated into this trip, though the trip really wasn't meant to be a solely curricular one. The students also made abundantly clear that this was not the goal of their trip either anyways. Sigh.)

We met the students at the airport and flew to Paris for what turned out to be barely a layover. The airline actually held our plane to Athens for us which was good because we had 23 of us sprinting through what I'm SURE is the biggest airport in the world. Half of us got separated from the rest of the group in that jog through the Paris airport and I had visions of "Home Alone" dancing through my head. But we all made it.

Our first full day in Athens was a marathon as well. We did the Olympic Stadium, the Athenian Acropolis (fun fact: we always think of the Acropolis in Athens when we here the word, but most ancient cities had an acropolis), Parthenon, Athens' Market, Athens' Museum, and the Temple of Poseidon all that day. 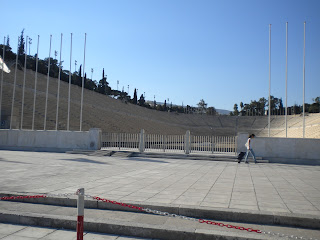 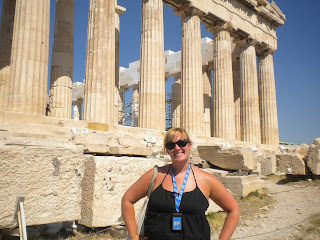 Me in front of the Parthenon 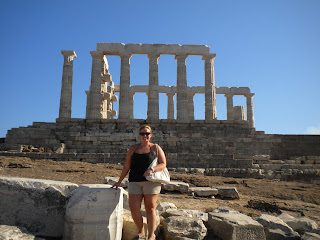 In front of The Temple of Poseidon 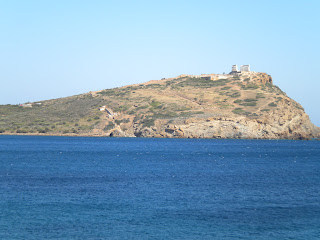 Temple of Poseidon from a distance

We had a free day the next day in Athens, but it also happened to be the day of the notorious elections in Greece so there wasn't much to do. All the shops and major sites were closed. Many of the kids decided to go to the beach. But my friend leading the trip and I led a make-shift tour of our own through some of the residential parts of Athens: 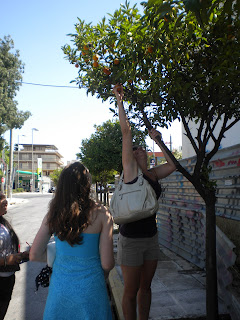 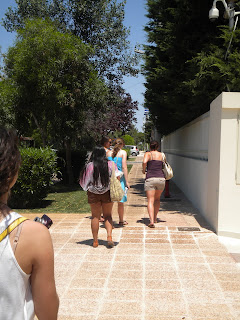 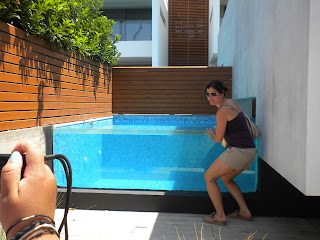 On Monday, we left for our cruise! The first stop was Mykonos. Each of the islands we would stop at had their own character. Mykonos was by far (for me) the prettiest and most quaint. 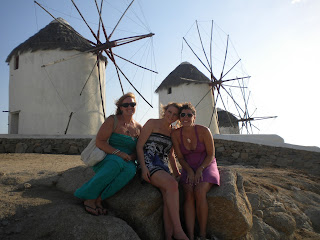 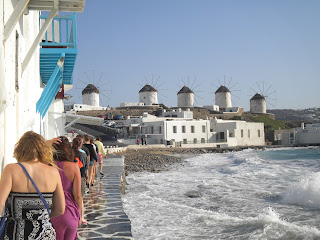 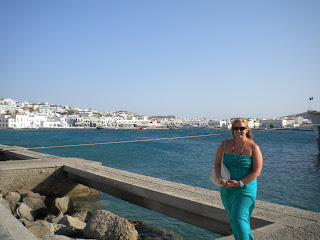 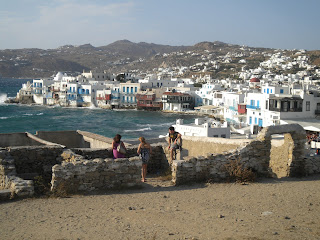 Tuesday was the most exciting for this Bible-geek. It was the most Scriptural day of our tour. We made a stop in Turkey in the morning and went to Ancient Ephesus. It was soooo cool to see where St. Paul and St. John most likely walked and where St. Paul preached and was imprisoned: 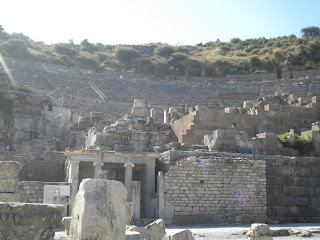 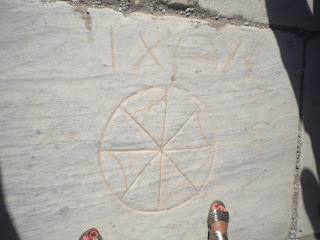 One of the first Christian symbols left by early Christians 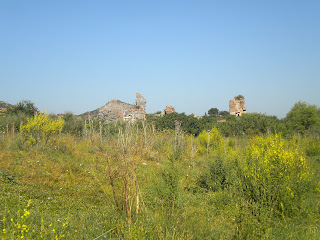 Ruins of where St. Paul was imprisoned.

Also on Tuesday, we cruised to Patmos where St. John was inspired to write the Book of Revelations and was also exiled. They wouldn't let us take pictures inside the "Cave of the Apocalypse" where he had the vision, but it was definitely one of the more memorable and moving parts of the trip for me. I got to see where St. John laid his head and I put my hand where he once put his. You can see the cracks in the cave that were said to have formed after he had this vision of Christ about the Book of Revelations.

This image is one that I bought an icon of and depicts St. John's vision of Christ that he saw in the Cave: 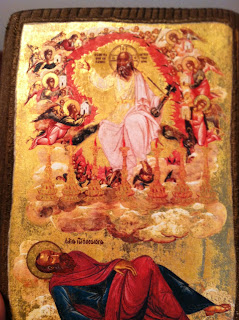 St. John envisioning Christ all in white, holding the judgment keys as well as the 7 angels representing the 7 cities St. John needed to share his message to. 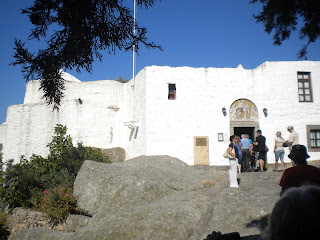 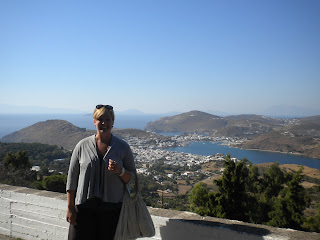 Wednesday, the ship took us to the Island of Rhodes where the most stand-out thing for me was the town of Lindos. Rhodes had some Medieval influences, but the ruins at Lindos were from 3rd/4th century B.C. I believe...

This was also a day that we finally started to bond with some of the students. Some of our group had taken it upon themselves to not really do the excursions but just sit aboard the ship all day and get into trouble. The students that came with us to Rhodes and Lindos, though, showed us that they were awesome and in Greece for the right reasons. My friend and I gave them the name "Team Alpha" or the "A-Team" :) 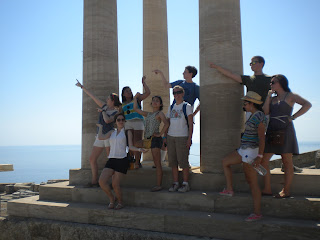 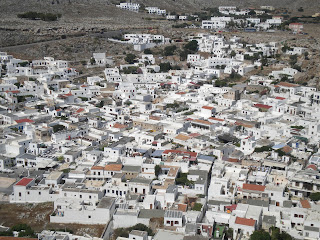 View from the Top of Lindos!

Thursday took us to Crete and then later beautiful Santorini. We only had a couple hours in Crete, so my friend and I happened upon a cab driver that promised to show us the highlights before our ship left the port. His name was Cristos. How can you go wrong with a man named after Christ? You can't. Cristos was awesome and took us to the Palace of Knossos and gave us a tour of Crete. 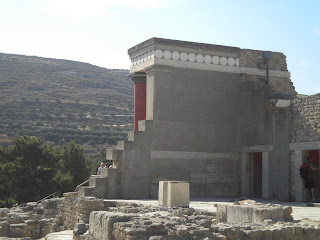 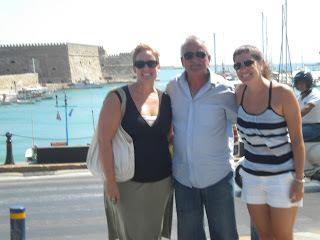 Us and Cristos our cab driver from Crete!

Santorini rivaled Mykonos for the most beautiful island. It is built on the top of the mountain, so you have to take either a cable car, a donkey, or walk 500+ steps. We opted for the cable car (I was not about to press my luck with a donkey!) 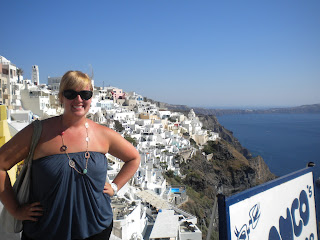 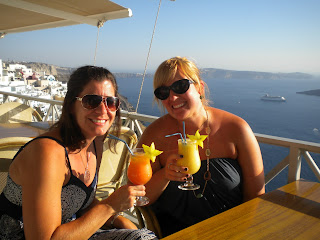 One of the best places ever to have a cocktail :)

Friday we finally disembarked the cruise ship and went back to Athens. Our tour guide took us to Delphi which is about 3 hours from Athens, but totally worth the trip. It is, of course, where the Oracle of Delphi originated and has so much cool history. 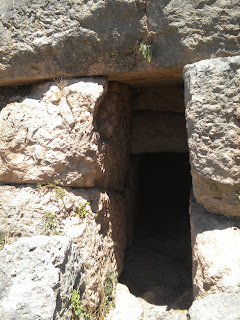 Where one would speak to the "oracle" 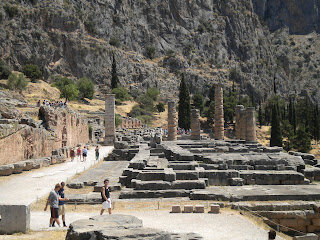 Temple of Apollo at Delphi 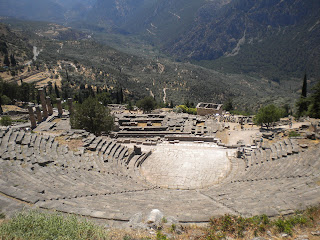 Overlooking the Theater at Delphi 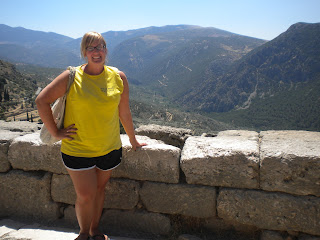 From the top of Delphi!

After our last night in Athens, we headed back to the now infamous Paris airport where we got a true layover and made a successful return to the States. Despite wanting to leave some of our troublemakers in the Aegean Sea at times, the trip was totally worth the price (free for me! only spent money on souveniers, excursions, some food and drink :) And it was definitely a trip of a lifetime! I recommend it to everyone!

Though I am glad to be back in the States and STUDENT FREE for 2 whole months! Whee!

The coming month of July is going to be crazy: trip to LA, trip home to OH, and then Workcamp! But summer is off to a great start.

Hope you all are well!
Peace,
Julia
Posted by Julia at 8:13 AM