"Twenty-Twelve" has a nice ring to it...

As previously mentioned my roommates from the past 3 or so years and I used to come up with themes to live for each new year.

Before I started living with them, they had still roomed with each other and I believe some of their themes were something like: "the year of high expectations." The years of  "low expectations" and eventually, "no expectations" soon followed...

2009, though, was the year of "positive realism" for us. I had one roommate who would have high hopes all of the time, but maybe not always achievable, realistic goals. I consider myself a realist, so we melded our two mottoes together.

I texted my old roommates and asked if this year- 2012- could be the year of "wanton bliss." Heh. I was half kidding. I just always try to be so grounded and realistic and the saying goes that "ignorance is bliss." Sometimes, I don't want to analyze stuff (yes I do) and throwing practicality aside to be "ignorantly blissful" sounds fun (I would never want to be ignorant.)

So maybe "wanton, unabashed bliss" is not the best theme for me...but I will keep it in mind! I am toying around a theme with "joy" and I also have been struck lately by the virtues. So perhaps "virtuous joy" will be a theme. I will try to focus on virtue that is being produced in me, rather than suffering or the struggles. And I will try to be joyful and not jealous or envious.

Other new year's resolutions for 2012:

- cook more (gasp!)
- drink less  (I just realized that drinking is what alot of us singles go-to as the thing we "get to do" since we are single. Ie: "oh, you're pregnant? HA. I get to DRINK." "oh, you're getting married? I'll be at the BAR." I don't like that this as our default, so Imma keep that in mind this year)

-like I said before, look at the virtue in things, rather than the struggle
- and try to be more joyful for myself and others

When I was home for Christmas, I went to one of my favorite chapels to pray. It overlooks Lake Erie and has Perpetual Adoration- two of my favorite things: nature and Jesus!

I particularly liked the saying that was underneath the tabernacle embroidered on one of the linens: 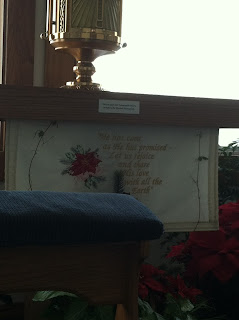 It says: "He has come as He has promised- Let us rejoice and share His Love with all the earth." - Love it! 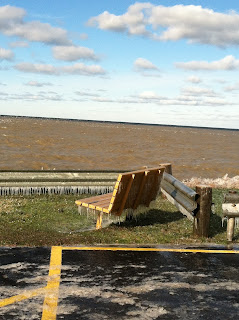 Sometimes I'll go and sit outside and overlook the lake...um, not this time... 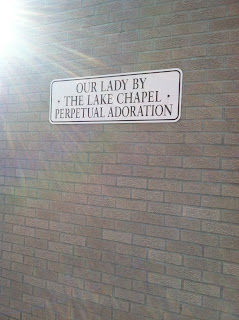 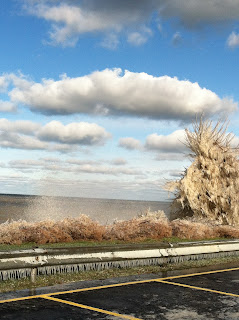 check out the waves blowing up on the lot! pretty sure that's how the tree got like this: 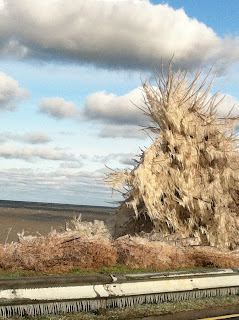 Happy 2012, everybody! May it be a year of much virtue and joy for all of us (and maybe a little bliss for good measure ;)