A New Father for Father's Day 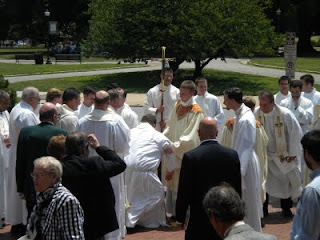 My friend, now FR Brian, giving his first blessings as a priest

This past weekend was pretty epic for many reasons, but one of which being that I got to witness my friend Brian become Father Brian.

I know Brian from my year with NET- we were on the same team. We had both just graduated from college- 8 years ago already!!! When I re-located to Arlington after my year of volunteering with NET, we were able to keep in touch and visit because he, too, was from VA. We became closer friends even after the volunteer experience.

I know I wrote about the beauty of ordination to the priesthood a little bit last year with my friend Ed (also from my NET year!) but I still thought of much to reflect and contemplate on as I witnessed the event and then also the event of Brian’s first Mass as a priest today- Father’s Day.

The first thing that always blows me away about my friends who are becoming priests is their ability to sacrifice. They are truly laying their lives down for the Church and for us so that we may be able to continue to have the Sacraments. And they WANT to do that for the Church and for God! I was moved by both of my friends’ first Masses because I knew how much they wanted to celebrate that first Eucharist for their friends and families and their new Bride- the Church.

In my own spiritual life, I have been coming back to elements of self-sacrifice too. One of the things that drew me to the convent and that draws me to the Church is that element of self sacrifice. Our Church is real good about getting the point home that love involves sacrifice. But do we appreciate it? Do we recognize God as the source and strength for those sacrifices? I know for myself, there is always that temptation to twist the sacrifice and say: “look at me! How noble am I that I am SACRIFICING for the good of others? Did you notice that I was SACRIFICING today??” Ugh. That’s SO not the point!

And my friend Brian just has always been so pure, I believe, in his intentions to be a priest. He’s asked himself all of the questions, looked at the alternatives, and still chosen this path because he feels so strongly about it. It’s so admirable.

And so what do I do? I get a little envious! God is clearly working in the lives of and through these men! Men that want to sacrifice for the good of God and others EXIST! ;) And I am so grateful to have some of these men in my life! But I do get a little envious that God seems to be keeping them for Himself! ;)

So, purity and sacrifice. We can twist sacrifice and make it something ugly, but it really is beautiful when done purely as my friend did so this weekend. This notion of sacrifice, as I said, has crept back into other areas of my life. While in Richmond, I was sitting with my friend whose house I always stay at when I'm in town, and we were sharing our thoughts on men, as we often do ;) And it struck me that this element of sacrifice is really important to me, not only in my relationship with God, but also my relationship with others. I do strongly believe that Love involves sacrifice and that the sacrifice is beautiful when pure. Sometimes I want to throw that purity and sacrifice out the window, but I know and trust in the beauty of when love is done right (with sacrifice), as demonstrated by my friend who became a priest this weekend.

My other thoughts and observations on the ordination yesterday:

- the litany of saints really got to me. I may have gotten choked up just a little. Just the idea that so many men and women whom we name have also given their lives in sacrifice for the Church and now my friend was committing to the Church they gave their lives for. It made me in awe of the community of saints and their witness to ALL of us in our calls to holiness.

- the Old Testament references (of course! "We GET IT, Julia- you teach Old Testament" is what you are saying to yourselves...And now I’m going to be doing directed research with an O.T. prof at CUA in the fall for credit!)Anyways, the priesthood was instituted, as we know, at the Last Supper, but has its roots in God appointing Moses and Aaron and the Levite priests which the bishop reminded us of at the Ordination

- PEOPLE WERE VERY EXCITED for my friend and the other young man ordained with him. People kept clapping after EVERYTHING! It made me think of Rebecca Black, sadly- “We so excited!” ( I would include the video, but it got yanked off of you tube! So you are WELCOME for its absence here…)

- These men are set apart by their call. So are married people, but do we see marriage as being set apart for God and for one person? We tend to think religious life is so isolating, but really, marriage is also a being “set apart” in a sense, too.

I think that’s it. The people around me at the ordination must’ve thought I was a news reporter (or just crazy) because I kept pulling the pen out of my purse and jotting down thoughts during the ceremony…WHO DOES THAT!?

I’m SO HAPPY for my friend Brian. Please keep him and his family in your prayers. May we all be inspired by his sacrifice and seek to make our own sacrifices for love of the Church and others.

I’m also SO EXCITED ( there it is again! “we, we so excited!”) for Workcamp! It starts this week! Pray for us too!

There is just no stopping the Holy Spirit during this time post-Pentecost! And I’m okay with it.

Also, I can’t believe I forgot- I AM DONE WITH MY FIRST YEAR OF TEACHING!! Success!!! Thank you for all your support of me this year. When I rolled out of bed at 8:15 this morning without an alarm and realized I had all of the time to work out, pray, run errands, etc. I thought to myself: “I am going to LIKE this summer thing.”

Okay, that’s really it now. And I’m signing off until after Workcamp. Thanks for your prayers!