Happy Easter and Divine Mercy Sunday! It has been a whirlwind of an Easter Octave, but a very good and blessed one.

As has been the case for the past three years since I've moved to Richmond and become active in the RCIA program in my parish, I took part in the Easter Vigil again this year. However, at the rehearsal the week of the ceremony, I was called to be a last minute sponsor for a 10 yo whose godparents weren't able to make it into town. 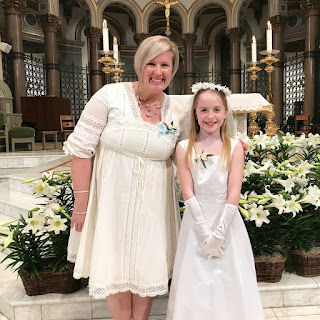 It is always an honor to guide someone in their journey with God and the Church, especially young people! It made Easter extra special again this year.

Our Spring Break is always Easter week, so on Easter Sunday, I met up with a friend who is also a teacher and we took off for our planned road trip to Gatlinburg and Nashville, TN! 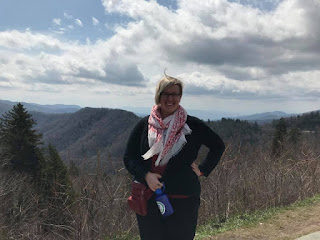 Hanging out in the Smoky Mountains 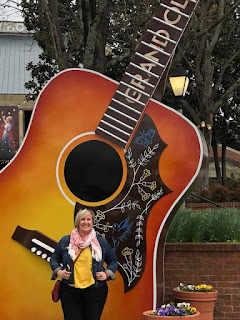 In front of the Grand Ol Opry!

So full disclosure- I'm actually not really a country music fan. I just love music in general and I know that some country stars are the roots for Rock and Roll and Pop music which I am more of a fan of. I also had been to Gatlinburg as a kid and remembered its kitsch and wanted to experience it again. My friend and I had fun in TN and kept busy doing all kids of quirky things like the Salt and Pepper Museum (yes, that exists and it is glorious!), climbing in the Smokies, driving to a Cherokee reservation, and witnessing the dinner theater treasure that is the Dolly Stampede (I remember attending this show as a child and it being called the "Dixie Stampede" then. I think it changed its name for political correctness, however, the "South" team still won in the competition we watched this week...yikes).

Tennessee was fun and pretty but definitely an eye opening experience. My friend and I live in our cozy liberal bubbles in California and Richmond, respectively. While I do experience people who disagree with my political views quite often here in VA, I wasn't ready for the blatant racism and aggression that existed in the souvenir shops, roadside attractions, billboards, tshirts, etc all over TN. It was frustrating to see people holding onto a hateful past instead of moving on with unity and openness.

I was also surprised by the ingrained evangelicalism there. My friend and I were often greeted with phrases relating to God and His blessings which I'm obviously not offended by, however, I'm not sure all visitors would say the same. After learning a little more about country music and its history in Gospel and Tent Revivals, it makes some sense why the evangelical Christian culture is also very deeply rooted. It was just an overall eye opening experience to see how this part of the country lives and I pray that we can all come to some middle grounds to heal the societal wounds that still obviously exist.

Arriving back in Richmond made me appreciate this city a lot more! I love my quirky little artsy city.
Today, I played for a Mass at a parish in Church Hill for Divine Mercy Sunday. The priest gave an awesome homily on Doubting Thomas and Mercy and I would like to share some of his points here.

Father noted that Doubting Thomas (and the subject of today's Gospel reading) often get a bad rap. Father pointed out that doubt is not necessarily a bad thing. Doubt keeps us from getting stuck in our ways. Doubt can lead us to question the status quo. It can push us to find answers that move us forward.

However, we have to keep our doubt from leading to fear which is where the problems begin. Father gave us a reminder for Fear as an acronym. He said it can stand for: False Evidence Appearing Real. I feel like this speaks volumes for the fear and fake news in our country today. It speaks to some of the racist things I saw this past week as well. To relate it to the Gospel, the apostles were afraid after the Crucifixion. They went and hid in the upper room.

Meanwhile, however, Mary Magdalene was brave and took a risk and went to the tomb that Easter morning. And she was rewarded by being the first to see the risen Lord. Father called her today the "apostle to the apostles." I love that! A woman as an apostle! It made me think that Pope Francis has so much ground to open up the possibility for a female deaconate and that is one of my prayers for the Church. I think we have so many examples in Scripture and history of women preaching the Good News just like Mary Magdalene. She was the one who went and told the others the Good News that is the crux of our faith- that Christ resurrected from the dead. That is pretty incredible!

Mary Magdalene and St. Thomas were not afraid to question and they were shown mercy. We are all in need of God's mercy in some way. We've seen it in a very real way this past year or so especially. Fear only brings about more false evidence. If we are brave and take a risk like Mary Magdalene or question like St. Thomas, we will be given mercy and more likely to show mercy to others- the mercy we all need.

Happy Easter for the next few weeks! It's my favorite liturgical season!