I'm not accustomed to naming my blog posts according to the ordered time of the Church, but the fact that tomorrow is the 32nd week in Ordinary Time struck me. There are 34 weeks of Ordinary Time in our liturgical calendar. That means that the end of this year in the Church is coming soon. As you know, I am accustomed to reflecting on my year around this time in November. We still have a couple of weeks until Advent so I'm not quite there yet, but it struck me that it is coming soon. Time to prepare for that preparation of Advent.

As a school teacher, I often notice how October just flies by. It seems like we start off fairly easy in August or September, just getting to know our students and getting back into the swing of things in our classrooms. And then October comes and BAM! ALL OF THE THINGS: football games, school plays, field trips, fundraisers. It's like we feel that by October, we should be able to handle all that the crazy that school year will throw at us and we pretty much jam it all into that one month. Not entirely sure why.

I was very much feeling the October crazy this year as you might imagine: new school, new town, new grade levels. But I went with the flow, did my best to keep my head above water, and enjoyed myself along the way (it's FALL after all! The best time of the year!)

Suddenly, it's November and the time that we start to think of the beginning of the end in more ways than one. We start by remembering our holy saints with the feast of All Saints Day and follow with remembering our deceased loved ones with All Souls Day. As I start to know- for better or for worse- more people who have died, these feast days become more important and dear. This past week, the beginning of  November also happened to be my most stressful week at my new school so far. With the end of October came the end of the first quarter at my new school and the end of a quarter is often stressful for teachers regardless of how long they have been in a place. I joked that I would be getting all of the souls in purgatory out this past All Souls Day as I sat for three hours in parent-teacher conferences.

November often has been a time of retreat for me, too. When I was at CUA, we often had our Antioch retreats which I led my Senior year. When I was a youth minister, I always ran some kind of fall retreat. And when I taught at the high school, we ran our Kairos retreats around this time. 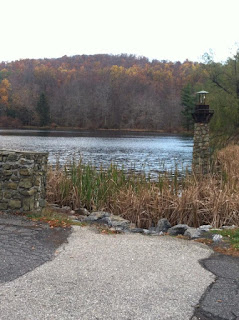 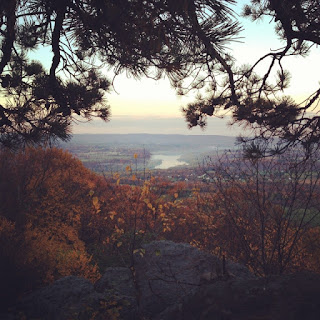 View from retreat center in MD where I led many a youth ministry retreat.

There is something about the end of the year that makes us reflect and the Church also reminds us of this with the feasts like All Saints and All Souls as well as the upcoming feast of  Christ the King. The earth and the Church are all kind of pulling us to slow down, reflect, and prepare for the winter and new year to come.

So it was a gift today to have a personal retreat of sorts this AM without my really realizing that it would be nor how much I needed it. I saw a flyer at my school for a talk by one of my favorite priests at a nearby parish. I immediately signed up and this AM was the morning of the talk. I figured that Fr Martin would give me something insightful and what he ended up saying (as I find more and more these days post my Theology degree) was nothing entirely new. But it is always life giving to have someone affirm things that you already know and remind you of why you do what you do.

Father James Martin, SJ is very much a media priest which is probably why I feel drawn to him. He does what I always have dreamed of doing and strive to do: he uses print, social media, and television to hand on the Catholic faith, particularly to audiences who may not understand what it is that Catholics do. I think his ministry is so important and I felt like such a fangirl when I rolled up to the Church this AM: 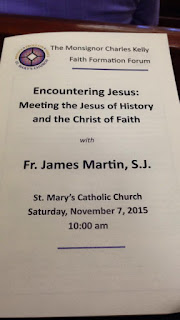 I wanted to get a selfie with him, but the line after the talk was LONG. So I just posted the above pic on all of my social media outlets.

Father spoke of his trip to the Holy Land which was the subject for one of his more recent books. He also spoke of the Incarnation- the divinity and humanity of Christ- which is always an interesting mediation, no matter how many times you study or teach it. We can never really wrap around our minds the fact that Christ was both fully human and fully divine and what that means.

I was delighted because he told many fun stories, but when it came to Scripture, he used some of my favorites- many from the Gospel of Mark where Jesus is very, very sassy and very human. We see Him get angry at his apostles, tired, and Father specifically used the story where Jesus has a playful moment with the Syrophoenician woman with the demonic daughter: "He said to her, “Let the children be fed first. For it is not right to take the food of the children and throw it to the dogs.”

She replied and said to him, “Lord, even the dogs under the table eat the children’s scraps.”

It's such a weird interaction for the super compassionate Jesus. It seems harsh for Him to say this to a woman, but I've always taken this passage as playful. Jesus knows where each one of us is at. He knows what we need and how we will respond. Perhaps for this woman, this was the type of interaction that she needed to believe.

Fr Martin also used two of my very favorite stories in the Gospels: The Raising of Lazarus (which I know I've written about before, specifically when still in the convent) and The Calling of Zacchaeus. The story of the Raising of Lazarus has been significant to me in finding out who I am to Jesus. I remember hearing a priest speak about this passage when I was at CUA- about how Jesus would weep for us, just like He did for Lazarus because we all have the possibility to be that close to Him. I used this example as a testimony for years while on NET and in youth ministry. When I was in the convent, the passage was more about the death of Lazarus as I was dying to myself and feeling like I was leaving "a stench" (sorry for the graphic, but that's reference to the passage itself!). It was meditating on this passage that perhaps led me to the decision to leave the convent and that religious life was not ultimately for me. Now, and specifically today, the passage shows me so much about who Christ is: his humanness, his power, his love.

A couple of weeks ago in the October crazy, I had to attend one of many diocesan sessions that I've had to take part in since I've moved to this new diocese. I'm grateful that the diocese wants to assure that their catechists have proper training, but....ahem...theology degree. So I drove to VA Beach, against my will, but which ended up being worth it because I got to see and spend time with a high school friend and her son: 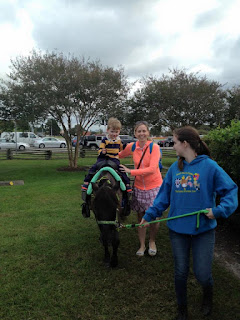 My friend and her son RJ on his first pony ride! I got to witness it firsthand.. 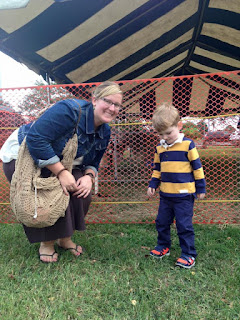 RJ still has mixed feelings about spending the day with me which is fair.

At the required catechetical session beforehand, as part of a group discussion, the facilitator asked us to share with the people around us our favorite childhood Scripture story. I shared that one of my favorites had been the story of Zacchaeus. The guys I shared with were for some reason taken aback by this. They thought it was very Theology teacher of me for some reason...I'm still not quite sure why.

The reason I liked the story as a child, I think, is because it was easy to imagine as a child: a short man, probably my height back then as I was always a giant, climbed a tree to see Jesus better. What child doesn't like to think about climbing trees? And best yet, Jesus sees Zacchaeus in that tree and calls him down from all the crowd to have dinner with him. Another great visual for me as a child: dinner with Jesus!

And as I grew older, I began to appreciate even more the significance of the story and Christ's actions in it. He called a sinner- a taxcollector- from a crowd and this befuddled the others but led Zacchaeus to conversion. As an adult, I can see the compassion and challenge in it. But I like to think that I understood this as a child as well.

Father Martin used this story to show once again, both Christ's humanity and divinity and how we as a Church are to welcome and include others...even those we think aren't worthy or are "sinners" (and surprise! We all fit that category!) As I wrote when I last posted about the Pope, I agree that this is something we struggle with as a Church: welcoming people and encouraging conversion, not demanding it.

The talk and reflection today comes at this perfect time of early November- the 32nd week in Ordinary Time- where we round out "the October crazy" and prepare for the beginning of the end of the year. I'm grateful to have this food for thought and prayer at this time and am looking forward to the hope and reflection of the end of this liturgical year and the beginning of Advent.

Happy 32nd week in Ordinary Time! May it be extraordinary.