The Women in My Life

Those of you who know me know that I go down to Richmond a fair amount to see some of besties who live there (and get my hair did. My hair stylist, Missi, is the greatest. She is a 90s music connoisseur, has a great sense of humor, and has become one of my biffles or besties as well).

A couple of weekends ago when I was in Richmond, my girls and I were porching it (aka- hanging out on the front porch, taking in the Richmond scene, consuming a beverage or two, etc.) and discussing what makes one a feminist. Just your typical Friday night fodder. Actually, some of them keep a feminist blog and, well, we *are* all women, so the fact that we would be discussing such matters is hardly unheard of.

I have always considered myself somewhat of a feminist in that I believe in promoting women's strength and equality to men in a civil rights sense. I know that men and women are created differently (duh). But history has a track record of also treating us differently in an offensive, oppressive way, so I'm a feminist in that I want to ensure that that never happens again and stops happening in places that anti-feminism still exists. I believe women can do what men can do (again, in a civil sense) and ALL people should be given equal, basic human rights regardless of race or gender.

In the course of our conversation, we brought up a certain iconic female rap artist and debated whether she is a feminist or not. She is an artist that has proven her equality with men in that she can do what they do and rap about sex in a vulgar way. We wondered: is she asserting her equality with them? Or is she actually demeaning herself and women by rapping about her body and all of the things that she can/a man can do with/to it.

I chose to vote for the latter. And since then, I've thought about the music and artists I grew up and whether or not they promoted a positive, feminist model for me. I feel like I grew up in an age (the 80s or 90s) in which women were finding their way in a man's world and finally starting to assert themselves successfully in it- whether that be in the workplace, the art world, etc. Power suits became a thing, though, they were not pretty: 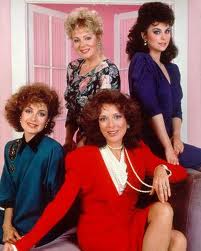 The ladies of Designing Women....God, I loved that show....

I actually debated with a student last year whether a power suit made you a feminist or not. She (and we certainly thought so in the 80s) seemed to think that wearing a suit made a woman equal to man. I happen to think you can still dress feminine and like a lady and be treated equally to a man. And if someone talks down to you because you are looking cute and professional and sophisticated in a super cute dress or skirt, well, then shame on them.

But here are some of the ladies I looked up to as a kid and an adolescent. I kind of wish girls and teens today had some of the same rolemodels: 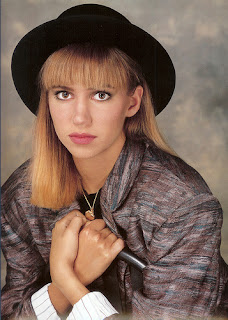 Debbie Gibson
This was seriously the first woman I idolized. And I apparently still idolize her since I have the same bangs 20 some years later: 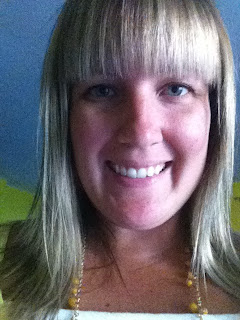 I think she was only in her late teens or early twenties at the time herself, and her pop songs may have not been all that prolific (see Electric Youth) but she wrote her OWN. SONGS. And she was always fully clothed. Can Rihanna say that? After a summer full of nannying I've learned that a young girl's first music tastes are not always refined, so please don't judge me. Though, I do find myself judging Deborah now herself when I follow her shameless self-promotion on Vine. 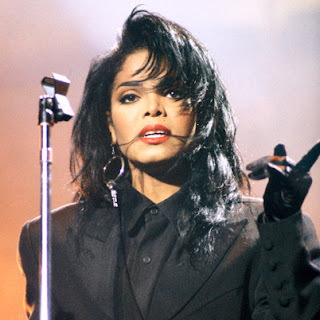 Janet Jackson
She was in "Control" and I loved her for it. I still want to realize my dream of creating a musical based on her work and using her original "Rhythm Nation" and "If" choreography. I would merely write and stage the musical as I could never, ever master the aforementioned choreography. Janet started her music career all covered up physically and eventually she started showing some skin. "Janet" was definitely one of the most scandalous albums I ever owned, but I think that says more about my music collection than it does about her. 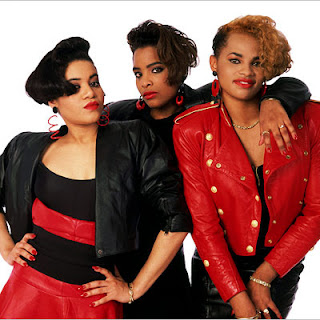 Salt N Pepa
These ladies. Remember the female rapper I mentioned earlier? She needs to take a note from these ladies. Like Janet and the Designing Women before them, they started their careers mostly covered up and dressed even a little more masculine. No doubt to fit into the male dominated rap game they were a part of (I love that I just used the phrase "rap game" appropriately and non ironically). But like Janet, they eventually shed their skin, but I don't believe to fit into a more over-sexed, objectified female trend. They had already proven their chops. They were just doing them and their lyrics (unlike aforementioned female rapper) can back that up. 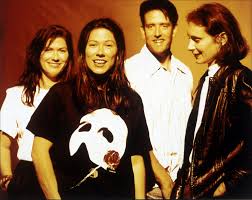 Kim Deal (of The Pixies and The Breeders)
Oh man did I ever want to be this lady from The Breeders- one of my favorite alternative bands of the 90s. I think I even had that same Phantom of the Opera oversized shirt. Not really, but it was also not unlikely. I don't think teenagers realize that we used to LIKE wearing our clothes baggy. That it was a THING. We would tie things around our waists ON PURPOSE not to hide a spot or stain on our pants. But Kim Deal was one of my alternative idols with her eccentric, musical style. Again, another woman doing her amid a largely male-dominated scene like the 90s grunge scene. 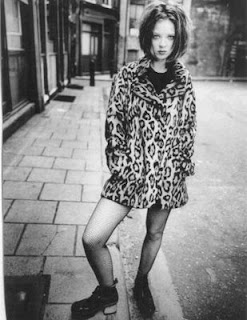 Shirley Manson
No, she is not related to Marilyn. That man scared the begeebus out of me. She, however, like Kim Deal was a rocking, alternative chick heading up a band of all dudes and doing it in a feminine way. See also: 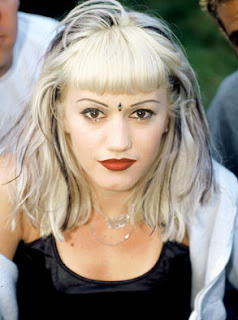 Gwen Stefani- beautiful and feminine with amazing style but doing it her way, not they way any trend or man tells her to. She makes the trends. But I can't even talk about her abs.

So clearly I am a child of the 80s and 90s. But Julia, this is a THEOLOGY blog. So can we get some Scriptural models up in here? I'm so glad you asked.

For my Masters degree I wrote a research paper on three different female types in the Old Testament. The Old Testament so rarely even mentions women (sadly. Alas, a sign of the culture and times) that those that are mentioned you know have to be pretty solid. Here are the ones I chose to profile: 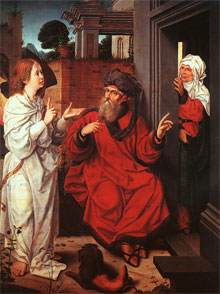 Sarah
(She's peeping outside of the door no doubt overhearing the angel speaking to Abraham and laughing at what the news was- she's going to have a BABY? At her age?? Bah! Ain't nobody got time for that).
I read Genesis and some critiques for my research and found Sarah to be the strong, but "stand by your man" type. She was obviously a strong woman but had to abide by cultural norms. She let her husband sleep with a concubine (not feminist in my mind) but God told her that that was not part of the plan and she and Abraham needed to get with the program. The fact that she is clued into this plan is HUGE, however, since usually it's just the dudes in the O.T. who are running the show (but everyone knows that behind agreat Jewish man is a great Jewish woman ;) 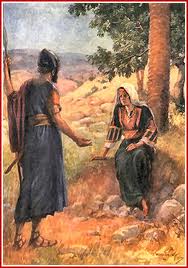 Deborah
Now we are talking. Girl was the only female judge of Israel and she just sat and hung out under a tree (HER palm tree, no less- see Judges 4) and let the people come to HER. She also commanded a military from that tree. WHAT. 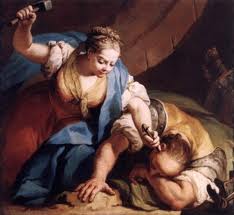 Jael
Let's call her the strong but silent type. She is kind of the "Joan" (if I may use a Mad Men analogy:) 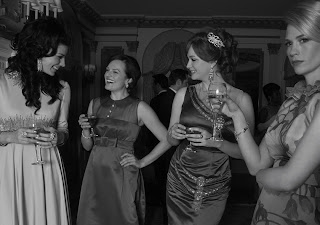 Oh, man, I love the female characters on Mad Men, too...that's another blog for another time...

in which she uses her female sexuality to lure a man and then promptly tricks him and turns the tables... running a stake through his head. Dudes are so dumb sometimes...and Jael knew this.

These are just some of the women I have chosen in the past to focus on, think about, and let influence my life in some way. Who am I currently influenced by you might ask? Well, pop culturally, I'm obsessed with female comedians and writers like Mindy Kaling, Tina Fey, Amy Poehler, and Kristen Wiig. I may never be a writer because those ladies have already said it for me. Also, say what you will about this lady and her husband, but there is no denying that she is a powerful woman and a great study for feminism: 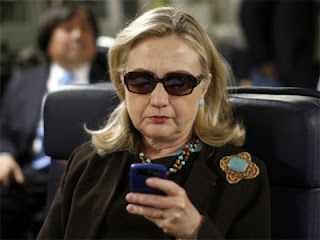 And of course, I'm surrounded by so many "real" ladies- my teacher friends, my Richmond girls, my Jingers- 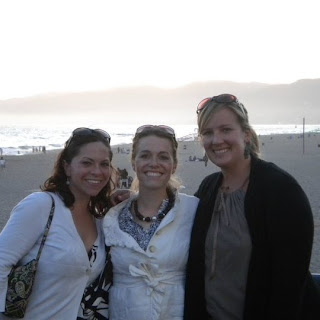 Susan and Steph may actually be my real life heroes. Sus just had a baby and is already pursuing her phD. She also kept her last name when she got married which I think is kind of rad. Steph is one of the most athletic women I know and can run and tackle and throw like one of the guys and she is fierce when it comes to Fantasy Football. And they are both still such ladies!

And the real ladies in my life will also always be these ladies (with one on the way! My sis is preggers with a girl! And my cousin just had a girl, too!) 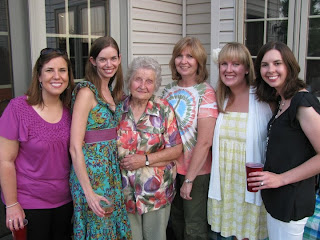 My cousins, sister, mother, grandmother, and I

Girl Power! (and that leads us to the Spice Girls... Feminist or not? I will leave that one up to you.)