My newest Sunday pre-Mass ritual consists of getting my cup of coffee and then going to my computer and pinning all of the things on Pinterest. As Dionne from Clueless would say that "Cher's main thrill in life is a makeover. It gives her a sense of control in a world full of chaos" so does Pinning give a woman a sense of control over what she cannot and will not ever really have in life...expensive wedding dresses, home decor, and the like. 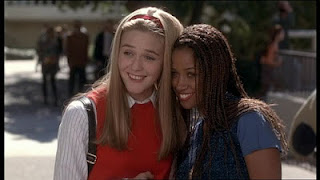 Cher and Dionne from Clueless, 1995...a year before any of my current students were born.... 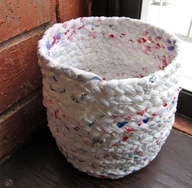 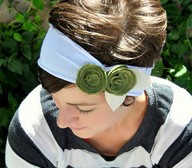 Only on Pinterest can one learn how to make a basket out of plastic bags and a headband out of old tshirts!!!

I also made a web-stop to Facebook this morning (as you do) and saw that one of my "friends" commented on the connection the Church makes between Marriage and the Eucharist in today's Mass readings.

(also, do your FB friends leave statuses and comments about the Eucharist?? I mean, you follow this blog, so probably...)

I always try to make a point of reading the Scriptures for Mass ahead of time so that I can really reflect on them, but this Facebook status today made me even more eager to delve into this morning's readings.

The first reading from Joshua contains the famous verse that some people might have hanging in their homes (I bet you can find a throw pillow or something with this first on it on Pinterest!):

The 2nd reading is the rather infamous one from Ephesians 5 that can make some people cringe:

I will say, I much prefer the "shorter form" of this reading that eliminates some of the "submissive" language, but the point is not wasted on me. Plus, it also says that husbands need to love their wives with the utmost sacrifice and give totally of themselves, so there's that.

The Gospel is a continuation of The Bread of Life discourse from John 6 where the disciples have just heard that they must drink of His Blood and eat of His Flesh, so they are understandably puzzled. They say: "This saying is hard; who can accept it?" and "as a result of this, many of his disciples returned to their former way of life and no longer accompanied him."

Something that we as humans do that makes us unique from other creatures is express this desire and intent to serve and follow through a vow. I HATE when speakers and writers use Websters dictionary definitions to make a point, but here it goes:

A vow- from the Latin "votum" promise- is a promise or an oath. A solemn promise or declaration.

Why is it important for us as humans to make vows? We make vows to God through Sacraments like Baptism and Marriage, but even outside of the Church people fight so that they might be able to make a public declaration or vow of their love for someone or something.

And it baffles me that we want so much to make these vows (particularly in marriage) but...do we even know why? For some, it is because they feel it will give them equal rights. For others, so they can feel they meet the expectations of society or a "timeline". And still for some, so they feel they have a "special day" and can wear a poofy dress on a reality show.

Consecrated religious make vows and take years to discern the promises they are going to make to God. In some marriages, we hear people make promises but perhaps do not fully realize what they are promising. And still even more often, our godparents make baptismal vows for us and we never think of those promises again.

When I was discerning religious life, people asked me why I wanted to do it. I had many responses, but one was that I would be vowed or consecrated to something. It was important for me to be vowed to something. It still is. I would like to share and make vowed promises with someone.

We all want to belong. We all want to be loved and have that love assured. But I think we need to really discern what motivates us to want to "serve and follow" something or someone so much so that we want to declare that publicly in a promise. A vow is a beautiful thing that we as humans can share. As I continue to discern what God is calling me to, I want to look at all the ways I can belong and live out the vows I have already made and renew in Baptism.

One last nerdy thing: this summer, I studied the origins of some of the Sacraments. Namely, the Sacraments of Initiation (Baptism, Confirmation, Eucharist) and also Marriage. The CCC (Catechism of the Catholic Church) says that Baptism is the gateway, it is the door to all of the other Sacraments. Likewise, the other Sacraments take root in our Baptism. People can get married in the Church now and not necessarily be Catholic, but in the early Church, a sacramental marriage was two baptized Christians stating that they wanted to live out their Baptismal call in a partnership together.

I know this could start a whole new debate or blogpost, but to go back to the original thought sparked by my Facebook friend- the readings, Marriage, the Eucharist...they are connected. They all contain people making promises or vows to serve and follow. As our country fights about who can and who cannot make "vows", let's all think about what a public promise rooted in Baptism means to us...

That's a little bit heavy, huh? I think I will also leave you with something random. Not terribly related, but also not terribly UN-related, one of my latest indie-hipster album loves is appropriately entitled "Vows" by Kimbra. You should check it out. I promise you won't regret it. Heh.