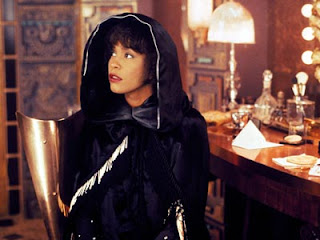 That's right. This IS a picture of Whitney Houston from her movie with Kevin Costner called The Bodyguard. What were YOU doing in 1992?

I myself was eleven, and I had a number of cassette tapes that I liked to sing through in their entirety in my parents' basement, pretending I was actually Whitney Houston, Mariah Carey, or the like. That's what I was doing in 1992.

Whitney Houston's Bodyguard Soundtrack made it into the rotation, much to I'm sure my parents' dismay, because you can't just SING Whitney. You MUST belt it. And no one can sing Whitney besides Whitney herself, let alone an eleven year old girl as much as she tried.

Oh and I tried.

Now, however, I cringe like any other person in America when I hear the starting notes:

Sigh. I hear Whitney's trying a comeback, but it's such a shame she just couldn't see that 'crack was whack' in the first place. Now all I can really hear her belting in my mind is:

Being Bobby Brown? Anyone? Such a sad, sick show, but slightly hilarious.

So WHY am I expounding on Whitney Houston? Well, one of the songs (of course. because I don't speak normally to Jesus, there MUST be a running soundtrack) came to my mind today at Adoration. The song was from The Bodyguard Soundtrack that I reenacted in my basement some...SHOOT 18 years ago?!

I feel like I've been running to and from Jesus for a number of years now. And I mostly find myself running TO Him when things are bad. When I have nothing else or noone else to turn to, I go to Him. I throw myself down at His feet when I am sad or scared.

Well, today, I felt a little call to run to Jesus after work in Adoration and it was a good thing. Things are- for the first time in a while- kind of where I want them to be. So when I felt called to run to Adoration I had to stop and ask, 'Why are you calling me here now, Lord?'

But doesn't it make sense to go to Adoration when things are GOOD?And I realized once I was there for a minute that, 'duh...I've been given all these things of late...I'm kind of going to need to rely on Him MORE'

It's like the Gospel reading yesterday: 'To those whom are given much, much will be required". And oh, I've been knowing that for sometime now, so I must not forget it just because things are moving!

Also, the Holy Spirit is kind of re-arranging the way I think about relying on God. The Spirit is all about that possession, that love of God in charity that is without abandon...

Like today, I have started the second part of Archbishop Martinez' book and have gotten into the Gifts of the Spirit. Today's chapter was on piety.

I have always understood piety to be something solemn or saintly. And it is, but not in a rigid, boring, silent way is what I found out today. I think of a pious person and I think of the goody goody who doesn't do anything wrong and just wants to pray all day. In Martinez' book, he talks about piety in an almost reckless way. Because piety= abandon. We are not pious out of duty, but out of love. We are pious because we want to please the Father, but only because we love Him so much. When we practice piety, we love and serve without abandon. The saints were pious, but they were also radical!

I liked this new take on piety...maybe I will try to work on it a little more now...running to Jesus and all....

I also loved this past weekend's second reading from Hebrews 11 where Paul talks about the faithfulness of God and also of Abraham. My friend called me yesterday pretty much just to tell me that she was grateful for God's faithfulness. How great is that? Often we call to complain to each other, but what a blessing to just acknowledge to one another: "you know what? God IS trustworthy."

"By faith Abraham obeyed...by faith he was able to generate, even though he was past the normal age...for he thought the one who had made the promise was trustworthy"

I guess I think God is pretty trustworthy too ;) He has proven it time and again. And He WANTS us to be happy:

"Do not be afraid any longer, little flock, for the Father is pleased to give you the kingdom"

Pleased to give us the kingdom. Wants to give us everything. Kind of makes you want to run to Him open-armed, movie-style, huh?

Great post Julia! To be honest I was just listening to that song last week. It is a powerful witness to turn God during the tough times as well as the good times. Thanks for the post.